Panel discussion on RT.com on prospects for war and peace in Ukraine 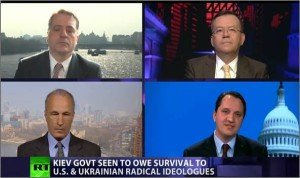 “Purging Kyiv?’ That was the question discussed during a lengthy panel discussion on RT.com’s ‘Crosstalk’ program on the political situation in Ukraine. The panel featured journalist Alexander Mercouris in London, Professor Anton Fedyashin of the American University in Washington DC, and analyst Charles Shoebridge in London.

Watch the discussion here, or by clicking on the screen below.