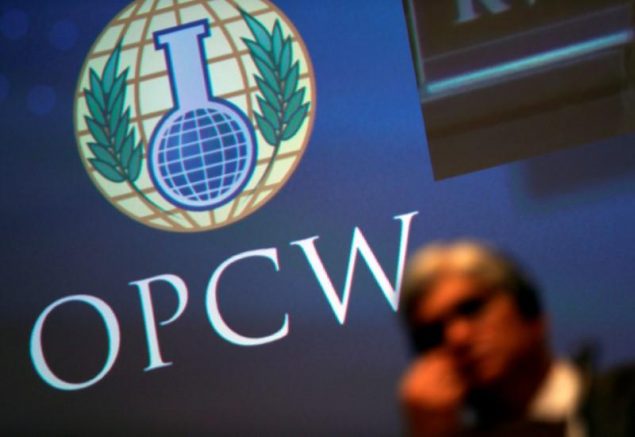 The logo of the Organisation for the Prohibition of Chemical Weapons (OPCW) is seen during a special session in the Hague, Netherlands June 26, 2018. REUTERS/Yves Herman

Panel criticizes ‘unacceptable practices’ in the OPCW investigation of the alleged chemical attack in Douma, Syria on April 7th 2018

The Courage Foundation convened a panel of concerned individuals from the fields of disarmament, international law, journalism, military operations, medicine and intelligence in Brussels on October 15th. The panel met with a member of the investigation team from the Organisation for the Prohibition of Chemical Weapons (OPCW), the international chemical watchdog. On this basis the panel issued the following statement:

Based on the whistleblower’s extensive presentation, including internal emails, text exchanges and suppressed draft reports, we are unanimous in expressing our alarm over unacceptable practices in the investigation of the alleged chemical attack in Douma, near the Syrian capital of Damascus on 7 April 2018.  We became convinced by the testimony that key information about chemical analyses, toxicology consultations, ballistics studies, and witness testimonies was suppressed, ostensibly to favor a preordained conclusion.

We have learned of disquieting efforts to exclude some inspectors from the investigation whilst thwarting their attempts to raise legitimate concerns, highlight irregular practices or even to express their differing observations and assessments —a right explicitly conferred on inspectors in the Chemical Weapons Convention, evidently with the intention of ensuring the independence and authoritativeness of inspection reports.

However belatedly, we therefore call on the OPCW to permit all inspectors who took part in the Douma investigation to come forward and report their differing observations in an appropriate forum of the States Parties to the Chemical Weapons Convention, in fulfillment of the spirit of the Convention. They should be allowed to do this without fear of reprisal or even censure.

The panel advances these criticisms with the expectation that the OPCW will revisit its investigation of the Douma incident, with the purpose of clarifying what actually happened. This would help to restore the credibility of the OPCW and work towards demonstrating its legally mandated commitment to transparency, impartiality and independence. It is of utmost importance to restore trust in the verification procedures relied upon to implement the prohibitions of the CWC.

José Bustani, Ambassador of Brazil, first Director General of the OPCW and former Ambassador to the United Kingdom and France,

Dr. Helmut Lohrer, MD, Board member of International Physicians for the Prevention of Nuclear War (IPPNW) and International Councilor of its German Affiliate

Prof. Dr. Guenter Meyer, Centre for Research on the Arab World (CERAW) at the University of Mainz