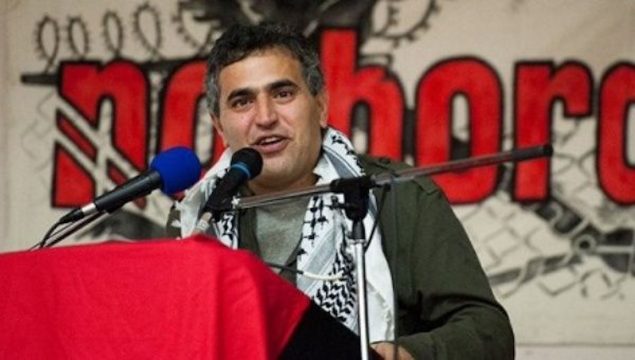 Khaled Barakat, a Palestinian-Canadian journalist was threatened with prison for speaking about Palestine. | Photo: No One Is Illegal Vancouver

German authorities blocked Khaled Barakat from speaking about Palestine at a solidarity event held in Berlin last month, claiming his activities could present a threat to the country’s relations with Israel.

The Palestinian-Canadian journalist, Khaled Barakat,  was blocked from speaking about Palestine at a solidarity event held on June 22 in the German capital, Berlin. German authorities claimed Khaled Barakat’s activities could be a threat for the relations between the country and Israel.

Barakat had been requested to intervene in an event about Palestine where he was supposed to speak on the liberation of Palestine, the implication of this liberation for the Arab world, the Donald Trump’s Middle East peace plan, among other issues. German authorities claimed his speeches could be a threat to the relations between the country and Israel.

“As soon as we left the U-Bahn [train] station nearest the venue, my wife and I noticed heavy police presence in the area, including multiple vans full of police,” Barakat told Electronic Intifada.

He was then approached by a group of police officers who told him he could not speak at the event and then took him and his wife to the police station. Officials then presented him a document issued by the Berlin Foreigners Registration Office, prohibiting him from any political activity, including participation in specific events and presence at gatherings and meetings until he leaves the country.

If the journalist fails to respect these conditions, he could face up to one year in prison, the document indicated.

Authorities justified these drastic measures saying that the Palestinian journalist’s ideas and political activism “pose a threat to public safety,” and “impair and endanger the peaceful coexistence of Germans and foreigners.” They added that Germany’s relationship with Israel could be altered and “considerably endangered” if they were to allow him to speak.

The official document also noted that Barakat might be a member of the Popular Front for the Liberation of Palestine (PFLP), which is listed as a “terrorist organization” by Israel, the United States and the European Union.

“If you look at the campaigns being carried out by Israel and the Ministry of Strategic Affairs against Boycott, Divestment, and Sanctions (BDS) organizations around the world, or Students for Justice in Palestine in the U.S. they are trying their best to criminalize all movements for Palestine or even human rights organizations by using so-called connections to Hamas and the PFLP,” Barakat said.

The eight pages official text then listed a number of speeches given by Barakat but eventually offered no example of the journalist’s alleged anti-semitism. Despite it, the text reads, that “the public should be protected from your expected anti-Semitic and anti-Israel statements.”

“The same forces advocating for and issuing this political ban against me are involved in repressing Jewish voices that criticize Zionism, Israeli policy and German policy on Israel,” Barakat said, explaining German government is trying to impede a united front embracing people from Arab and Jewish communities in Berlin willing to advocate for and promote the liberation of Palestine and its people’s human rights.

The group Jewish Voice for Just Peace in the Middle East, for instance, had its bank account closed, two Jewish activists are currently on trial along with a Palestinian after they interrupted an Israeli politician supporting Israel’s 2014 assault on Gaza, among many other cases.

Earlier this year, the Palestinian activist Rasmea Odeh was prohibited from speaking in Berlin for International Women’s Day and was then forced to leave the country. All these facts added to the recent resolution by the German Parliament to libel the BDS movement as anti-semitic, give a certain idea of the environment faced by pro-Palestinian activists in Germany and more generally in Europe.