Over 40 Groups Call on Congress to Oppose Sanctions, Military Intervention 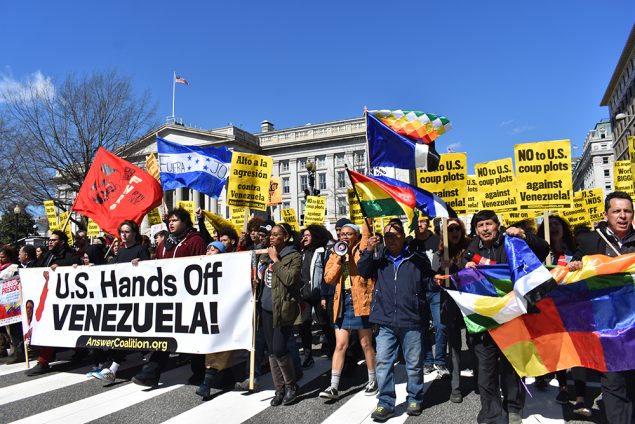 International solidarity movements are mobilizing to oppose US intervention in Venezuela, denouncing sanctions and supporting dialogue.

US attempts to oust the Venezuelan government have been escalated in recent months. Following opposition leader Juan Guaido’s self-proclamation as “interim president” on January 23, which was reportedly orchestrated in Washington, the US foreign policy establishment threw its weight behind what was seen as the “final push” against the Maduro government.

This escalation has seen US officials outright reject all international dialogue initiatives meant to defuse the political crisis, impose successive rounds of sanctions against the Venezuelan economy, and reiterate that all options, including a military intervention, are “on the table.”

These events have drawn a response from Venezuela’s popular Chavista movement, with recurring rallies in support of the government and in defense of national sovereignty. Likewise, international solidarity movements have mobilized to oppose US intervention, denouncing sanctions and supporting dialogue. The letter below is undersigned by more than 40 US groups, including Just Foreign Policy and CEPR, calling on Congress to “stand against immoral, reckless, and illegal policies […] before it’s too late.”

We, the undersigned groups, wish to express our grave concern regarding the Trump administration’s dangerous and destructive regime change strategy targeting Venezuela. Broad economic sanctions unilaterally imposed by the administration since August of 2017 have caused great hardship and loss of life for many Venezuelans. The latest round of sanctions announced in January are expected to worsen the current crisis and provoke even greater human suffering throughout the country.

Though many observers have noted that civil war is an increasingly likely prospect, administration officials are vigorously opposing peaceful dialogue between the country’s political actors and have made open threats of military intervention.

We call on you to take a strong, public stand against these immoral, reckless, and illegal policies and to support efforts to advance peaceful dialogue, before it is too late.

We urge you to:

Although government mismanagement and the fall in global oil prices are to blame for much of Venezuela’s deep crisis, the Trump administration’s economic sanctions — both the August 2017 financial sanctions and the January 2019 sanctions on Venezuela’s oil industry — are resulting in billions of dollars of additional lost foreign exchange necessary for essential imports, according to experts and even administration officials like NSC Advisor John Bolton. In the current context these sanctions will inevitably generate greater human suffering, including many deaths from lack of medicine and other essential imports. Unilateral economic sanctions are illegal under the UN Charter and the OAS Charter; and research shows that they are generally ineffective in achieving desired political results.

President Trump has reportedly argued for military intervention in Venezuela since early 2017, while he and various other administration officials have repeatedly stated that “all options are on the table” for Venezuela. These threats are absolutely unacceptable, particularly regarding a country that poses no threat to the U.S., and are only increasing the immense political polarization in Venezuela. Members of Congress should firmly denounce these threats and make the adoption of the “Prohibiting Unauthorized Military Action in Venezuela Act” a top priority. They should also commit to invoking the 1973 War Powers Resolution in the event that President Trump and his Administration involve the military in any action directed at Venezuela, thereby triggering a debate and vote in Congress to terminate any unauthorized use of force.

U.S. administration officials have rejected the possibility of dialogue and, instead, have pushed for immediate regime change in Venezuela, calling for Venezuela’s armed forces to rebel against the Maduro government. Experts have warned that this strategy could result in a split within the country’s military, with a potentially catastrophic violent outcome. Members of Congress should oppose the administration’s dangerous zero-sum strategy and advocate for peaceful dialogue. The Vatican, the UN Secretary General, Mexico, and Uruguay have all offered to help mediate dialogue and political negotiations to resolve the current crisis peacefully. Congress should support these efforts.

With the recent appointment of convicted Iran-Contra veteran Elliott Abrams as Special Envoy to Venezuela and the increasingly hawkish rhetoric coming from the White House, your support could not come at a more crucial time. There is no moral, legal, or political justification for the collective punishment of the economic sanctions, which target the Venezuelan population. There is no military solution; Venezuela’s crisis must be solved through dialogue and negotiations. Congress should therefore insist on lifting destructive economic sanctions, and taking unauthorized war off the table.

The views expressed in this article are the authors’ own and do not necessarily reflect those of the Venezuelanalysis editorial staff.