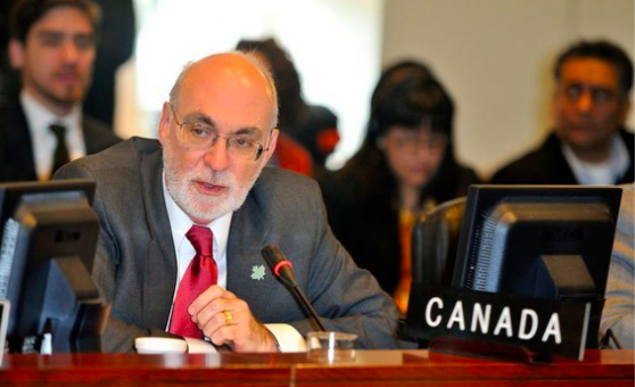 Global Affairs Canada has recently “tendered a contract to coordinate its bid to oust President Nicolás Maduro.” Ottawa’s answer to Elliot Abrams goes by the name of Allan Culham, once Canadian ambassador to Venezuela, El Salvador and Guatemala, he has been the country’s Special Advisor on Venezuela since the end of 2017.

Meet the hired gun Ottawa is using to overthrow the Venezuelan government.

The brazenness of Ottawa’s intervention in the South American country’s affairs is remarkable. Recently Global Affairs Canada tendered a contract for an individual to coordinate its bid to oust President Nicolás Maduro. According to buyandsell.gc.ca, the Special Advisor on Venezuela needs to be able to:

“Use your network of contacts to advocate for expanded support to pressure the illegitimate government to return constitutional order.

“Use your network of civil society contacts on the ground in Venezuela to advance priority issues (as identified by civil society/Government of Canada).

The “Proposed Contractor” is Allan Culham who has been Special Advisor on Venezuela since the fall of 2017. But, the government is required to post the $200,000 contract to coordinate Canada’s effort to overthrow the Maduro government.

Culham is a former Canadian ambassador to Venezuela, El Salvador, Guatemala and the Organization of American States. During his time as ambassador to Venezuela from 2002 to 2005 Culham was hostile to Hugo Chavez’s government. According to a WikiLeaks publication of US diplomatic messages, “Canadian Ambassador Culham expressed surprise at the tone of Chavez’s statements during his weekly television and radio show ‘Hello President’ on February 15 [2004]. Culham observed that Chavez’s rhetoric was as tough as he had ever heard him. ‘He sounded like a bully,’ said Culham, more intransigent and more aggressive.”

The US cable quotes Culham criticizing the national electoral council and speaking positively about the group overseeing a presidential recall referendum targeting Chavez. “Culham added that Sumate is impressive, transparent, and run entirely by volunteers”, it noted. The name of then head of Súmate, Maria Corina Machado, was on a list of people who endorsed the April 2002 military coup against Chavez, for which she faced charges of treason. She denied signing the now-infamous Carmona Decree that dissolved the National Assembly and Supreme Court and suspended the elected government, attorney general, comptroller general, and governors as well as mayors elected during Chavez’s administration. It also annulled land reforms and reversed increases in royalties paid by oil companies.

After retiring from the civil service in 2015 Culham described his affinity for another leading hard-line opposition leader. Canada’s current Special Advisor on Venezuela wrote, “I met [Leopoldo] López when he was the mayor of the Caracas municipality of Chacao where the Canadian Embassy is located. He too became a good friend and a useful contact in trying to understand the many political realities of Venezuela.” But, López also endorsed the failed 2002 coup against Chavez and was convicted of inciting violence during the 2014 “guarimbas” protests that sought to oust Maduro. Forty-three Venezuelans died, hundreds were hurt and a great deal of property was damaged during the “guarimbas” protests. Lopez was also a key organizer of the recent plan to anoint the marginal opposition legislator Juan Guaidó interim president.

In his role as Canada’s ambassador to the OAS Culham repeatedly took positions viewed as hostile by the Chavez/Maduro governments. When Chavez fell gravely ill in 2013, he proposed the OAS send a mission to study the situation, which then Vice-president Maduro described as a “miserable” intervention in the country’s affairs. Culham’s comments on the 2014 “guarimbas” protests and support for Machado speaking at the OAS were also unpopular with Caracas.

At the OAS Culham criticized other left-of-centre governments. Culham blamed elected President Rafael Correa for supposedly closing “democratic space” in Ecuador, not long after a failed coup attempt in 2010. When describing the Honduran military’s overthrow of social democratic president Manuel Zelaya in 2009 Culham refused to employ the term coup and instead described it as a “political crisis”.

In June 2012, the left-leaning president of Paraguay, Fernando Lugo, was ousted in what some called an “institutional coup”. Upset with Lugo for disrupting 61-years of one-party rule, Paraguay’s ruling class claimed he was responsible for a murky incident that left 17 peasants and police dead and the senate voted to impeach the president. The vast majority of countries in the hemisphere refused to recognize the new government. The Union of South American Nations (UNASUR) suspended Paraguay’s membership after Lugo’s ouster, as did the MERCOSUR trading bloc. A week after the coup Culham participated in an OAS mission that many member countries opposed. Largely designed to undermine those countries calling for Paraguay’s suspension from the OAS, delegates from the US, Canada, Haiti, Honduras and Mexico traveled to Paraguay to investigate Lugo’s removal from office. The delegation concluded that the OAS should not suspend Paraguay, which displeased many South American countries.

Four years later Culham still blamed Lugo for his ouster. He wrote: “President Lugo was removed from office for ‘dereliction and abandonment of duty’ in the face of rising violence and street protests (that his government was itself instigating through his inflammatory rhetoric) over the issue of land rights. Violence in both the countryside and the streets of Asuncion threatened to engulf Paraguay’s already fragile democratic institutions. Lugo’s impeachment and removal from office by the Paraguayan Congress, later ratified by the Supreme Court, launched a firestorm of protest and outrage amongst the presidents of Paraguay’s neighbours. Presidents Rousseff of Brazil, Hugo Chavez of Venezuela and Cristina Kirchner of Argentina, were the chief defenders of Lugo’s right to remain in office.”

After retiring from the civil service Culham became more candid about his hostility to those trying to overcome extreme power imbalances in the hemisphere, decrying “the nationalist, bombastic and populist rhetoric that many leaders of Latin America have used to great effect over the last 15 years.” For Culham, “the Bolivarian Alliance … specialized in sowing its own divisive ideology and its hopes for a revolutionary ‘class struggle’ across the hemisphere.”

Culham praised the defeat of Cristina Kirchner in Argentina and Dilma Rousseff Brazil.

In a 2015 piece titled “So long, Kirchners” he wrote, “the Kirchner era in Argentine politics and economics is thankfully coming to an end.” (Kirchner is the front runner in the upcoming election.) The next year Culham criticized Brazilian President Dilma Rousseff’s bid to have UNASUR challenge her impeachment, which he celebrated as “a sign of change in Latin America”.

Culham denounced regional integration efforts. In a long February 2016 Senate foreign affairs committee discussion of Argentina, he denounced diplomatic forums set up by Brazil, Ecuador, Bolivia, Argentina, Venezuela and others to break from US domination of the region. “Since I’m no longer a civil servant”, Culham stated, “I will say that CELAC [The Community of Latin American and Caribbean States] is not a positive organization within the Americas. Mainly because it’s built on the principle of exclusion. It purposefully excludes Canada and United States. It was the product of President Chavez and the Chavista Bolivarian revolution.” Every single country in the hemisphere except for Canada and the US were members of CELAC.

Culham criticized left-wing governments position at the US dominated OAS. Culham bemoaned the “negative influence ALBA [Bolivarian Alliance for the Peoples of our America] countries have brought to the OAS” and said Argentina “often sided with Bolivarian revolution members” in their “negative agenda” at the OAS, which he called “very close to my heart”.

In his comments to the Senate committee Culham criticized Kirchner for failing to pay the full price to US “vulture funds”, which bought up the country’s debt at a steep discount after it defaulted in 2001. He described Kirchner’s refusal to bow down to highly predatory hedge funds as a threat to the “Toronto Stock Exchange” and labeled a Scotia Bank claim from the 2001 financial crisis a “bilateral irritant” for Canada.

Canadian taxpayers are paying a hardline pro-corporate, pro-Washington, former diplomat hundreds of thousands of dollars to coordinate the Liberal government’s bid to oust Venezuela’s government. Surely, there is someone in the House of Commons willing to inquire about Canada’s Elliot Abrams?