By RT.com, Jan. 14, 2015 (See the video below which records the moment of the deadly shelling attack that struck the bus)

A joint commission including the OSCE, Ukraine, Russia, and the Donetsk People’s Republic (DPR) will start an independent investigation on Thursday, January 15 into the shelling of a passenger bus near the town of Volnovakha in eastern Ukraine which killed 12 people and injured 17 [casualty figures from OSCE mission report, Jan. 14]. 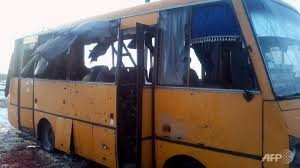 The commission will conduct an independent investigation into the Tuesday [Jan. 13] tragedy. It will be carried out alongside an official investigation by the OSCE, Denis Pushilin, DPR representative at the Minsk ceasefire talks last September, told RT on Wednesday. The commission, which was proposed by the Organization for Security and Co-operation in Europe (OSCE), will begin its work on Thursday.

OSCE representatives have visited the site of the deadly shelling, inspected it, and met with witnesses and security officials, Deputy Chief of the OSCE mission Alexander Hug told journalists on Wednesday.

Passengers of the bus died from impact with objects which had high kinetic energy, Hug said. He added that the mission is so far unable to identify the type of weapon used, and can only say that the incapacitating fragments were of different sizes.  “All parties are interested in a quick and thorough investigation,” Hug said.

On Tuesday, the Donetsk Prosecutor’s Office launched an investigation into the shelling. It qualified the case as a terrorist act, saying the attack was “targeted” and “carried out by a Grad multiple rocket launcher using over 40 shells,” according to its press service.

Kiev swiftly blamed Donetsk militia of carrying out the attack. DPR officials have rebuked the accusations, saying that it was technically impossible for them to have shelled the site. Pushilin told RT on Tuesday that according to his data, the closest DPR artillery crew was stationed 50 kilometers from the site which is “out of the operational range of the artillery of our militia.”

He said that DPR has no access to the site, as it is located on Kiev controlled territory, adding that he does not want to speculate or accuse anyone before the investigation brings any results.

Following the attack, videos were posted on social media websites showing the moment of the shelling and the aftermath:

Heavy fighting is ongoing at the war-torn Donetsk airport, which used to handle some five million passengers a year before becoming one of the key points in the standoff between the Ukrainian army and local militia.

Meanwhile, DNR’s Pushilin said the Ukrainian army is pulling out from the airport area. “The Ukrainian military is leaving the territory of the Donetsk airport, our military is making this possible [creating corridors]. This is a gesture of good will on the part of the DPR,” Pushilin told Rossiya 24 TV channel.

At approximately 14:35hrs on 13 January, the regional traffic police confirmed to the SMM that a Grad rocket struck close to a civilian bus when it stopped at a Ukrainian Armed Forces checkpoint approximately 2km north of Volnovakha (35km south-west of Donetsk).

The SMM arrived at the location of the incident at 17:45hrs and witnessed the removal of two of the dead passengers from the bus. The bus had shrapnel damage consistent with a nearby rocket impact, estimated by the SMM to be 12-15 meters from the side of the bus. The SMM visited the Volnovakha hospital where the staff confirmed that ten persons on the bus were killed instantly, while two died later in the hospital. Another 17 passengers were injured.

Following a proposal from the SMM, the Ukrainian Major-General and Head of the Ukrainian side to the JCCC, the Russian Federation Major-General, representative of the Armed Forces of the Russian Federation to the Joint Centre for Control and Co-ordination (JCCC), and the “Donetsk People’s Republic”  (DPR) leadership have agreed to conduct a joint investigation led by the JCCC. In parallel, the SMM will continue its observations and establish its own findings regarding the incident.

For PDF attachments or links to sources of further information, please visit: http://www.osce.org/ukraine-smm/134636