Yulia Tymoshenko is no stranger to political uprisings falling apart. Now she sees early elections as the only way Ukraine’s latest can survive.

The peasant-braided icon of the Orange Revolution a decade ago, she became prime minister before infighting sank the pro-democracy government and allowed its Russian-backed adversary to take charge. Fast forward to 2016 and a similar scenario is playing out: rulers swept to power by street protests risk squandering their chance to reshape the ex-Soviet republic. 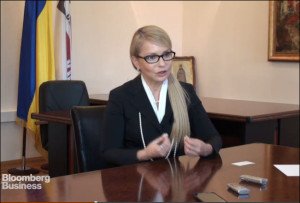 “It’s absolutely logical to compare what happened in 2005 with what is going on now,” Tymoshenko, 55, said Tuesday in an interview in Kiev, the capital. “The Ukrainian people crusaded against an alliance of politicians and oligarchic clans. And the people who came to power after each revolution were unable to counter the clan system and corruption.”

The political tumult is the worst since demonstrators toppled Kremlin-backed President Viktor Yanukovych, starting a chain of events that devastated the economy and reignited Cold War tensions. Having climbed out of recession, restructured $15 billion of debt and signed a pact to end the war in eastern Ukraine, President Petro Poroshenko’s political coalition is now splintering over efforts to stamp out graft. While the strains risk bringing down the government and halting billions of dollars of aid, Tymoshenko said an overhaul is the only way to rid the system of those who’re holding Ukraine back.

“There’s a shadow majority in parliament that’s united by corrupt interests,” said Tymoshenko, who was imprisoned under Yanukovych over a Russian natural gas contract. “They outnumber the lawmakers who are democratic, pro-European, who are reform-minded, and who want real changes. The majority wants to keep the old system at any cost.”

Officials are aware what’s at stake if the kind of squabbling seen after the Orange Revolution persists. Prime Minister Arseniy Yatsenyuk, who survived a no-confidence motion in parliament last week, said Friday that the government “doesn’t have the right to repeat the mistakes of 2005.” 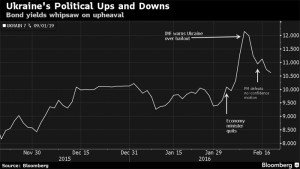 The International Monetary Fund has also spelled out the dangers: Managing Director Christine Lagarde warned after Economy Minister of Ukraine Aivaras Abromavicius quit this month that a $17.5 billion bailout could be suspended without concrete progress in fighting corruption. Investors sent debt yields above 12 percent, though they’ve eased since Yatsenyuk sought to safeguard the ruling coalition following the exit of two parties, including Tymoshenko’s Batkivshchyna (Fatherland) Party.

“A minority government or fresh elections would add to the uncertainty around the Ukrainian authorities’ capacity to pass reforms that are critical to keeping the IMF program on track and to underpin macroeconomic stability,” Charles Seville, a senior director at Fitch Ratings, said Wednesday in an e-mailed note. The impact of politics on Ukraine’s sovereign credit profile will depend on whether IMF disbursements are further delayed and official lenders’ willingness to support Ukraine is weakened, he said.

Poroshenko wants a cabinet revamp to ease tensions and expedite reforms. Tymoshenko, whose falling out with Poroshenko, an ally of former-President Viktor Yushchenko, contributed to the downfall of her administration, said that won’t be enough.

“To preserve the current status quo means instability in Ukraine — it’s a dead end for reforms,” Tymoshenko said. “It will be honest to have snap elections. As a result, after two revolutions, we may finally get a real reform-minded majority.”

While the president’s and premier’s parties dominate the current ruling coalition, their ratings have plummeted. Poroshenko’s party would win 16.6 percent if the vote was now, according to a poll released February 23 by the Kiev International Institute of Sociology. Tymoshenko’s party would garner 15.1 per cent, while support for Yatsenyuk’s Narodnyi Front plunged to 2.5 per cent, from 22.1 per cent in 2014, too little to enter parliament.

She also doesn’t see an opportunity for pro-Russian forces to regain control, as more than 70 percent of Ukrainians want to join the European mainstream, she said. Many also blame Russian President Vladimir Putin for arming separatists and starting a war that’s wrecked the economy and killed more than 9,000 people in the country’s easternmost regions, which he denies.

“Putin’s plan is chaos in Ukraine,” she said [sic]. “To stop this, we must show the people that a new team has come, real changes have been started.”

That was the main message of talks with U.S. officials when she visited Washington this month. Rather than complicate the continued flow of aid and create instability, early elections are the only way forward, she said.

“In several weeks the international community will accept that stability will come by rebooting parliament and the government, and not via the status quo,” she said.