Open letter to Prime Minister Justin Trudeau by the Russian Canadian Congress on the escalation of violence in Donbass, Ukraine

To: The Right Honourable Justin Trudeau, Prime Minister of Canada
Re: Escalation of Violence in Donbass, Ukraine 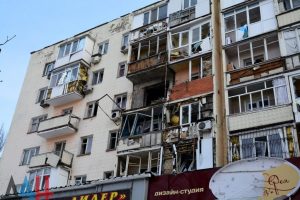 Apartment building in Donetsk shelled by Ukrainian forces during the night of Feb 2-3, 2017

The Russian Congress of Canada expresses its deep concern about the escalation of violence in the Donbass region of eastern Ukraine. Military actions have been re-escalated by the Ukrainian Armed forces beginning in the last days of January in blatant violation of the Minsk-2 ceasefire agreement of February 2015. Ukrainian Armed forces are shelling the city of Donetsk and neighboring villages and towns with heavy artillery, damaging residential areas and infrastructure.  Six civilians have been killed and 34 more wounded during the past week. These are the latest casualties of a civil war launched by the government in Kyiv that has lasted nearly three years, claimed the lives of over 10,000 people and forced some two million people to leave their homeland in eastern Ukraine.

In the months and weeks leading to this escalation of attacks by the Ukrainian Armed Forces, the Ukrainian Army has been building up its military presence in the front-line zone. Ukrainian political and military officials have simultaneously beefed up their militaristic rhetoric. Ukrainian forces have been conducting what they recently called a “creeping offensive”, seizing territory “meter by meter” in the “gray zone” between the rebel Donetsk People Republic and Ukraine.

The actions of the Ukrainian political leadership amount to sabotaging of the Minsk-2 agreement. Minsk-2 provides the only roadmap for the peaceful settlement of the armed conflict in eastern Ukraine. The Russian Congress of Canada calls upon the Canadian Government to live up to its declaration of supporting peace in the world and pressure the Ukrainian political leadership to end its murderous attacks on Donetsk. We strongly believe that Canada should engage in a peaceful resolution of the civil war in Ukraine by being an honest broker in relations between Kyiv and Donetsk.

Canada is an example of a multicultural country where respect for other languages and cultures prevails. Ottawa should use its close ties with the current Ukrainian leadership to educate this leadership about the values of multiculturalism, diversity and federal political institutions. It is time to stop the fratricidal war in Donbass and heed the will of the people there for distinct political, social and linguistic rights. We call upon the Canadian government to play a more active role in the establishment of peace in Ukraine.