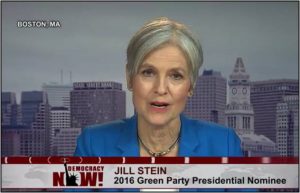 Further below, interview with Jill Stein responding to recount critics.

We write to reaffirm our commitment to building a Green Party that has a radical analysis of the society in which we live, and promotes bold solutions to transform our society and address the root causes of those crises; a Green Party that is independent of the two money-dominated parties.

There is a deep social crisis in the US. This crisis manifests in countless ways. One of its central manifestations is through the political system. People have legitimate concerns about the electoral system, which is manipulated through wholesale voter disenfranchisement, massive voter suppression and the racist and undemocratic historical logic of the Electoral College. In all fifty states, voters from poor and marginalized communities, especially Black people and other communities of color, have their votes suppressed and are excluded from participation through various practices.

The Green Party cannot build the political power necessary for the transformative changes we need by allying with two capitalist parties that serve the interests of the wealthy. That is why it is imperative that the Green Party is independent of those parties. We stay independent to give people an alternative to the corruption of two money-based parties. Greens reject donations from corporations and their political action committees to ensure we are accountable to the people and so that the people’s agenda is not superseded by the corporate agenda.

There are significant electoral reforms needed to make elections more democratic and more representative of the people. While we support electoral reforms, including how the vote is counted, we do not support the current recount being undertaken by Jill Stein.

The decision to pursue a recount was not made in a democratic or a strategic way, nor did it respect the established decision making processes and structures of the Green Party of the United States (GPUS).  The recount has created confusion about the relationship between the Green and Democratic parties because the states chosen for the recount are only states in which Hillary Clinton lost. There were close races in other states such as New Hampshire and Minnesota where Clinton won, but which were not part of the recount. And this recount does not address the disenfranchisement of voters; it recounts votes that were already counted rather than restoring the suffrage of voters who were prevented from voting.

As a candidate, Dr. Stein has the right to call for a recount. However, we urge the GPUS to distance itself from any appearance of support for either Democrats or Republicans. We are well aware of the undemocratic actions taken during the primaries by the DNC and the Clinton campaign. Greens cannot be perceived to be allied with such a party.

We remain committed to the Green Party’s four pillars and ten key values, which have at their foundation grassroots democracy. We urge the GPUS to prioritize its efforts on building our party from the bottom up, working and organizing in direct solidarity with our state and local parties and alongside and in defense of the rights of those most affected by the injustices of a capitalist, white supremacist and undemocratic system. This includes support for local efforts to prevent the disenfranchisement of people of color via voter suppression or because of felony convictions and to be more inclusive and participatory in our decision-making processes and work.

Signed,
270 signatures of Green party U.S. members and activists appended to this letter as of Nov 30, 2016. Go to the original weblink to see the growing list of signators.