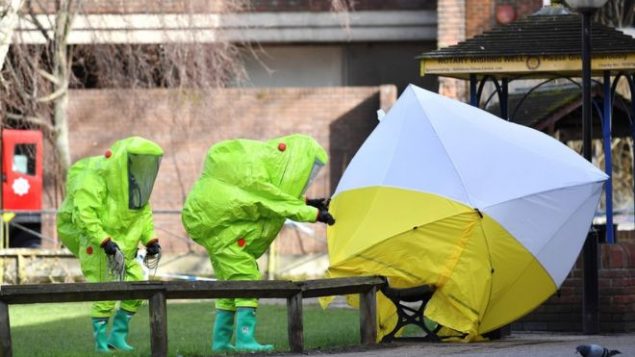 Besides its activities around dubious ‘chemical’ incident in Syria there is another rather famous case in which the OPCW got involved: The alleged ‘Novichok’ attack on Sergei and Julia Skripal in Salisbury, Britain.

With regards to the revelations about the OPCW management manipulation of its staff reports the former UN weapon inspector Scott Ritter makes a very valid point:

Thanks to an explosive internal memo, there is no reason to believe the claims put forward by the Syrian opposition that President Bashar al-Assad’s government used chemical weapons against innocent civilians in Douma back in April. This is a scenario I have questioned from the beginning. It also calls into question all the other conclusions and reports by the Organization for the Prohibition of Chemical Weapons (OPCW), which was assigned in 2014 “to establish facts surrounding allegations of the use of toxic chemicals, reportedly chlorine, for hostile purposes in the Syrian Arab Republic.”

Besides its activities around dubious ‘chemical’ incident in Syria there is another rather famous case in which the OPCW got involved: The alleged ‘Novichok’ attack on Sergei and Julia Skripal in Salisbury, Britain.

We discussed the OPCW involvement in the Skirpal case in our April 15 2018 report: Were the Skripals ‘Buzzed’, ‘Novi-shocked’ Or Neither?

The Foreign Minister of the Russian Federation, Sergey Lavrov, threw a bombshell at the British assertions that the collapse of the British secret agent Sergej Skripal and his daughter Yulia on March 4 in Salisbury was caused by a ‘Novichok’ nerve agent ‘of a type developed by Russia’. (See our older pieces, linked below, for a detailed documentation of the case.)

During a public speech yesterday Lavrov stated of the OPCW report:

[A] detailed and fairly substantial confidential version was distributed to the OPCW members only. In that report, in accordance with the OPCW way of conduct, the chemical composition of the agent presented by the British was confirmed, and the analysis of samples, as the report states, was taken by the OPCW experts themselves. It contains no names, Novichok or any other. The report only gives the chemical formula, which, according to our experts, points to an agent that had been developed in many countries and does not present any particular secret.

After receiving that report Russia was tipped off by the Spiez Laboratory or someone else that the OPCW report did not include the full results of its analysis.

According to Lavrov this is what the Spiez Laboratory originally sent to the OPCW:

“Following our analysis, the samples indicate traces of the toxic chemical BZ and its precursor which are second category chemical weapons. BZ is a nerve toxic agent, which temporarily disables a person. The psycho toxic effect is achieved within 30 to 60 minutes after its use and lasts for up to four days. This composition was in operational service in the armies of the US, the UK and other NATO countries. The Soviet Union and Russia neither designed nor stored such chemical agents. Also, the samples indicate the presence of type A-234 nerve agent in its virgin state and also products of its degradation.”

The “presence of type A-234 nerve agent”, an agent of the so called ‘Novichok’ series, in its “virgin state”, or as the OPCW stated in “high purity”, points to later addition to the sample. The ‘Novichok’ agents are not stable. They tend to fall rapidly apart. Their presence in “virgin state” in a sample which was taken 15 days after the Skripal incident happened is inexplicable. A scientist of the former Russian chemical weapon program who worked with similar agents, Leonid Rink, says that if the Skripals had really been exposed to such high purity A-234 nerve agent, they would be dead.

The whole case, the symptoms shown by the Skripals and their recuperation, makes way more sense if they were ‘buzzed’, i.e. poisoned with the BZ hallucinogenic agent, than if they were ‘novi-shocked’ with a highly toxic nerve agent.

The OPCW had send blood samples from the Skripals to the Spiez laboratory in Switzerland which found BZ, a psycho agent 25 times stronger than LSD. The OPCW hid this fact in its reports.

An attack with BZ on the Skripals would be consistent with the observed symptoms that bystanders had described. The Skripals were indeed hallucinating and behaved very strangly with Sergei Skipal lifting his arms up to the sky while sitting on a bench. Exposure to BZ would also explain the Skripals’ survival.

The OPCW explained the BZ find by claiming that it had mixed BZ into the probe to test the laboratory. Something which it said it regularly does. At that time I still believed in the OPCW and found that explanation reasonable:

The OPCW responded to Russian question about the BZ and high rate of A-234 in the Spiez Laboratory probe and report.OPCW said today that it was a control probe to test the laboratory. Such probes are regularly slipped under the real probes to make sure that the laboratories the OPCW uses are able to do their job and do not manipulate their results.

That explanation is reasonable.

I guess we can close the BZ theories and go back to food poisoning as the most likely cause of the Skripals’ illness.

In light of the OPCW management manipulation or suppression of the reports of its own specialists for the purpose of attributing the Douma incident to the Syrian government I have to change my opinion. I hereby retract my earlier acceptance of the OPCW’s explanation in the Skripal case.

As we now know that the OPCW management manipulates reports at will we can no longer accept the ‘control probe’ excuse without further explanations or evidence.

Here is what seems to have happened.

The OPCW did not send a control sample to Spiez to test the laboratory. It sent the original samples from the Skripals. Spiez found BZ and reported that back to the OPCW. The OPCW suppressed the Spiez results in its own reports. Somehow Russia got wind of the Spiez results and exposed the manipulation.

Acceptance that the Skripals had been ‘buzzed’, not ‘novi-shocked’ is central to the Skripal case. It makes the whole Skripal case as a British operation to prevent the repatriation of Sergei Skripal to Russia much more plausible.