Ivan Katchanovski is a researcher and lecturer at the University of Ottawa who continues to follow and document the story of the ‘Snipers’ Massacre’ on Maidan Square in Kyiv on Feb. 20, 2014. Below is latest information from him about the lagging-to-non-existent formal investigation of the sniper fire that killed dozens of people that day and served as a pretext for a violent coup against the Ukraine government in the days that followed. And here is further reading on the subject by the same author: 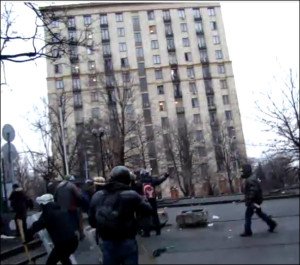 YouTube screenshot of shots being fired on police and protesters from Hotel Ukraina on Feb 20, 2015

*  The Snipers’ Massacre on the Maidan in Ukraine (revised and updated version), document by Ivan Katchanovski, Feb. 20, 2015

1. Recently discovered sources corroborate my analysis of the “snipers’ massacre” on the Maidan and show how leading Western media, such as BBC, CNN, and Paris Match, misrepresented this massacre. This is easy to determine and it requires no technical expertise or ballistic tests, which continue to be withheld by the government investigation. CNN filmed from the Hotel Ukraina a Maidan medic being shot in his right leg at 10:17am [on Feb 20, 2014] but did not report that this direction pointed to a shooter in one of the Maidan-controlled buildings, such as a roof window on Horodestkoho street or a roof of Bank Arkada. Maidan eyewitnesses, radio intercepts by SBU snipers, videos, and bullet impact signs all pointed to concealed shooters in these locations, which were at that time in the Maidan-controlled area.
(Referencing CNN report of Feb. 20, 2014)

2. In his Radio Svoboda [Radio Liberty] interview one year after the massacre, Roman Kotliarevsky, this wounded Maidan medic, said that his position at the moment of his shooting and a steep wound in the side back area of his right thigh indicate that he was shot from the Bank Arkada or a roof of one of the buildings there, i.e. the ones on Horodetskoho Street. He also stated that the investigation into his shooting was dragged out and that no specific suspects were identified. This is consistent with my study findings that the official investigation is falsified, since it continues to deny that any “snipers” were at these locations in spite of various evidence to the contrary.

[Kotliarevsky tells Radio Svoboda, “The investigation is very slow, and I do not see much desire to find the truth. Often I have to call the investigators and ask them, “Well, so what? Maybe something else will do? Send maybe for examination …” Everything is very slow, for the year has changed the order of five investigators. How long it will last and whether a result, I do not know.”] (Referencing Radio Svoboda report, July 15, 2015)

3. My study found that an exit bullet hole in the left side of his blue helmet and his position when he was shot in this video (39:48) indicated that Ustym Holodniuk was killed at 9:54:36 am from the direction of the Hotel Ukraina. The hotel, from which this video was filmed, was on the opposite side from the Berkut and Omega-manned barricade. The CNN video shows that the Maidan medic was wounded when he tried along with other Maidan medics to evacuate Holodniuk to the Hotel Ukraina.
(Referencing You Tube posting from Feb. 20, 2014)

4. A lawyer representing Ustym Holodniuk basically corroborated this finding in his interview which I just located. He said that Holodniuk was not among 39 protesters whose killings were attributed by the official investigation to Berkut. The lawyer also admitted that the investigation had evidence that protesters were shot from the Hotel Ukraina and Arkada buillding, but the investigation denied this at the time. The government investigation also did not disclose this information, specifically concerning Holodniuk.
(Referencing Vesti News report, October 2014)

His killing was publicized in Ukrainian and Polish documentaries and various media reports and attributed to government snipers or the Berkut. In a BBC interview earlier this year and in many other interviews, his father, a former policeman who was on the Maidan during the massacre and conducted his own investigation of his son’s killing, also misattributed Ustym Holodniuk’s killing to the government forces. With the exception of this crucial information buried in the interview of the lawyer, no other media reported that even official investigation did not include Holodniuk among the 39 protesters whose killings it attributed to the Berkut police.
(Referencing BBC News report, Feb. 25, 2015)