One million from eastern Ukraine have taken refuge in Russia 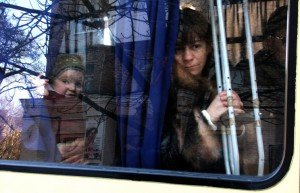 He put the number of the people from the south-east of Ukraine who entered Russia in a bid to flee the war zone at 940,000, including 300,000 who asked for temporary asylum and 170,000 who were given residence permits in Russia.

“All of them are eager to join a state program for resettlement of compatriots; around 60,000 ethnic Ukrainians have already joined,” Romodanovsky said.

“Around 480 temporary accommodation centers are available for Ukrainian citizens in Russia now. Many other Ukrainian citizens have been staying at their relatives’ homes in Russia. We are able to ensure support to such a number of refugees; we have been remitting money, provided by the state, to regions where the refugees are staying,” the FMS chief said.

Conditions in the northern part of embattled Donetsk and Luhansk were “particularly appalling” due to electricity and water shortages caused by shelling, the agency’s William Spindler said.

“Of special concern was the situation in regions controlled by the Ukrainian government,” Spindler said. This was worsened by lack of access to allowances and services previously provided by the central government and notably by restrictions on the movement of people and goods, he added.

The number of internally displaced persons in Ukraine has reached 1.1 million, the agency said, adding that 674,000 people had found shelter outside their country, of which 542,000 were in Russia and 80,700 in Belarus.