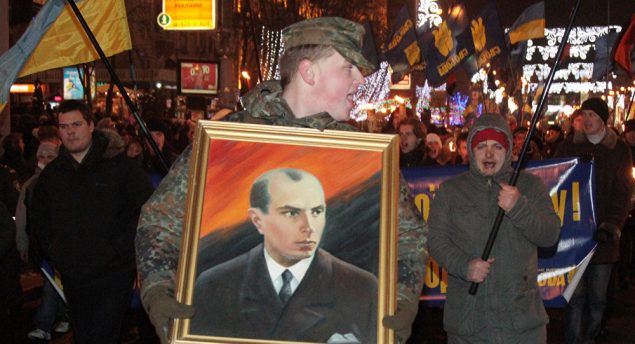 This piece by Scott Taylor explains how celebrating the birth of Stepan Bandera, a Nazi collaborator as well as a direct participant in Hitler’s Holocaust, has now become an officially sanctioned event; one witnessed by 200 Canadian military trainers.

For the approximately 200 Canadian military trainers currently deployed to Ukraine, it is likely that on the first of January they would have witnessed a torch lit procession. Throughout Kiev and numerous other towns in Western Ukraine, thousands of civilians took to the streets – not to usher in the New Year – but to celebrate the 110th anniversary of the birth of a man named Stepan Bandera.

This was not the first time Ukrainian nationalists marched with torches to celebrate Bandera’s birthday, but it was the first time such a spectacle was an officially sanctioned affair.

On December 28, 2018, Ukrainian Parliament passed Resolution 9234, which, among several other notable dates, made January 1 a formal holiday in Ukraine.

The city of Lviv, which was Bandera’s birthplace, went one step further by declaring 2019 to be the ‘Year of Stepan Bandera’.

Ukrainian Independent News Agency (UNIAN) described Bandera as “a Ukrainian politician, one of the ideologists and theorists of the Ukrainian nationalists movement in the 20th Century.”

Missing from this abbreviated resume is the fact that during World War II, Bandera was not only a Nazi collaborator, but also a direct participant in Hitler’s Holocaust.

Israel’s ambassador to Ukraine, Joel Lion published a statement announcing that he was “shocked” by this official honouring of a notorious Nazi. “I cannot understand how the glorification of those directly involved in horrible anti-Semitic crimes help fight anti-Semitism and xenophobia,” wrote Lion.

In June 1941, when Hitler invaded the Soviet Union, Bandera was the Chairman of the Organization of Ukrainian Nationalists (OUN). The Nazis saw Bandera and his fellow Ukrainian nationalists as natural allies in defeating the Soviets. In advance of the invasion, these ex-patriots were armed and equipped by the Germans and formed into a special unit called the Nachtigall battalion.

Roman Shukhevych was the commander of Nachtigall and he, like Bandera is currently revered as a Ukrainian nationalist hero. Unfortunately for their thousands of victims both Shukhevych and Bandera were bloodthirsty anti-Semites.

Ambassador Lion noted that Bandera and Shukhevych are currently seen by many Ukrainians as “heroes who fought for Ukraine’s independence; whereas they were both historically a horror for the Jews.”

After Ukraine gained its independence from the Soviet Union in 1991, their initial collaboration with the Nazis and participation in the slaughter of Ukrainian Jews prevented Bandera and Shukevych from being considered national role models. However, much to the consternation of the Jews, and the Poles – whom Bandera’s OUN also massacred in the thousands – over the past three decades history in Ukraine has been revised.

At the time of the Maidan uprising in 2014, the spirit of Bandera was revived by the right wing, ultra-nationalists, and, just five years later, his past crimes have been whitewashed to the point where his date of birth is a national holiday.

In Canada, we have been joining in exactly the opposite direction with regard to re-assessing our historical figures. Only last year, the City of Halifax removed a statue of Lord Cornwallis from a central park.

He is still recognized as the founder of Halifax, but his policy of putting a bounty on the Mi’kmaq tribe was deemed contemptible in retrospect. Therefore, his likeness is no longer afforded public reverence.

Canada is committing military resources to the government in Kiev. Surely this does not amount to a blank cheque wherein Canada’s Global Affairs refrain from criticizing such a questionable policy as that of glorifying a Nazi with an official holiday? A good friendship often requires a good dose of plain talk and bad manners.

In this case, Canada would be wise to side with the Israelis and the Poles in condemning torch-lit parades to commemorate the birthday of a man responsible for slaughtering Jews.

One of the justifications for our military trainers being in Ukraine is to defend and support Canadian values. Last time I checked, Canadians still reviled Nazis.