Recent weeks have been marked by a new phenomenon in the Western expert community: U.S. and EU policies on Ukraine are being criticized by the kind of people, whom it is simply impossible for the mainstream press to write off as “pacifists” or “Putin’s apologists.”  Instead of being on the fringes of U.S. or EU politics these critics belong to the “center” and represent growing anxiety over the West’ actions in Ukraine. 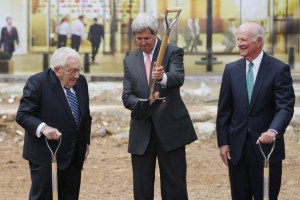 In an August 9, 2015 interview with The National Interest magazine, former secretary of state Henry Kissinger described the Western version of Vladimir Putin’s unprovoked attack against Ukraine as “not conceivable” and warned that the hawks in Washington may “face the consequences” if they continue trying “to break the back of the Russian government.”

Dimitri Simes, the president of the Center for National Interest, went even further in an August 20, 2015 interview, accusing Barack Obama of conducting “foreign policy by bumper sticker” and calling on the American president “to find a way to induce Moscow to collaborate in finding a settlement in Ukraine,” and “to establish an unappealing but strategically useful modus vivendi with Russia.”

These two people can hardly be called “useful idiots” – the name The Washington Post’s Anne Applebaum (misquoting Lenin) gives to “idealistic” Western sympathizers of Russian foreign policy. She could call on the British Labor candidate Jeremy Corbyn during the ongoing mud-slinging campaign against him, because Corbyn participated in the peace movement in the 1980s and thus can be suspected of being an idealist.

But calling Mr. Kissinger a “useful idiot”, with his Cold War experience and a record of diplomatic victories over the Soviet Union – this would be too much of a stretch even for Applebaum.

The team of pragmatic critics of Western support for Ukraine’s President Poroshenko includes not just Americans but also former German chancellors Gerhard Schroeder and Helmut Schmidt. One might add to it Luc Ferry, the former French education minister, who accused the West of “inventing itself an enemy” in Russia, by presenting the tragedy of Ukraine as a confrontation “between good Ukrainians and bad Russians”.

And if Gerhard Schroeder has long ago got accustomed to getting insults from the Western press because of his agreement to work for the Russo-German Nord Stream energy project, the American and German journalists will need to stretch themselves to find abasing motives for the position of the 96 years old ex-chancellor Helmut Schmidt. Speaking about the possible Russian intervention in eastern Ukraine, Schmidt said he “would consider it an error, if the West started acting as if [such an invasion] were necessarily the next step.”

The problem is that the West is already acting as if Russia indeed invaded Ukraine, and not the three per cent of Ukrainian territory controlled by the Donbass rebels, but the entire country.

A good indication of this sort of conduct on the side of the West is the recent announcement by the U.S. Vice President Joe Biden that Washington would give Poroshenko $500 million more for the “training” of the Ukrainian National Guard (which consists of paramilitary battalions known for their cruelty and ethnic bias) by U.S. instructors. This announcement, made in an official letter to the Ukrainian parliament, can be added to last year’s resolution of the U.S. Congress, which authorized Obama’s administration to provide $350 million worth of military equipment to the Ukrainian army. The supposedly “non-lethal” equipment, mentioned in the resolution, includes anti-tank systems and “crew weapons,” while the friendly “training” includes classes in marksmanship. And after that Obama and Biden defy all the lie detectors talking about their “help” to the people of Donbass and “friendship” with the people of Russia. With such friends, who needs enemies?

In his speech during the recent military parade in Kiev, Poroshenko said that by the end of the year, the Ukrainian army would get over 300 armored vehicles and 400 combat vehicles, as well as 30,000 missiles and other munitions. Earlier, the Ukrainian Military Prosecutor’s office revealed that up to 8,000 Ukrainian servicemen defected to the rebels, most likely joining their ranks, since these “traitors” may face criminal charges in the regime-controlled areas of Ukraine.

The conflict which started under the ousted president Viktor Yanukovich as a dispute over the timing of Ukraine’s joining the Association Agreement with the EU has been blown by the West to the size of a major security threat to all of Europe, not just to Russia.

In fact, this is the reason why Kissinger, Schmidt, Simes and other pragmatists are getting concerned. It is not humanism, but the instinct of self-preservation that is at work here. Total impunity for the past failures in Iraq, Libya or Syria is pushing U.S. officials into even more dangerous adventures in Europe. As Dimitri Simes noted in his article ‘Foreign Policy by Bumper Sticker’, “it is difficult to recall a nominee for any high-level national security position who has failed to win Senate confirmation, or even encountered significant criticism, for advocating or implementing ill-fated interventions. In contrast, many nominees have endured withering criticism for purportedly “soft” stances on exercising American global leadership by force.”

With such Senate requirements, which candidate will defend the peace?

Dmitry Babich is a political analyst with Sputnik radio.