May 2 will mark the second anniversary of one of the most horrific, politically inspired tragedies in modern European history — the fire in the Odessa trade union building that killed 48 people and wounded another 200. 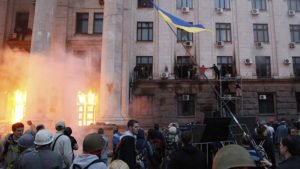 Numerous pleas by the United Nations and the European Union for a thorough investigation into the causes of this tragedy have gone unanswered. Multiple government commissions, both local and national, have been unable to move the case forward, partly because some of the evidence has been marked secret. Last November, the International Consulting Group, set up by the Council of Europe, issued a scathing report about this lack of progress, and the government’s apparent disinterest in bringing those responsible to trial.

Now, as we approach the second anniversary of these tragic deaths, and the commemoration of Soviet victory in the Second World War on May 9, some of the same groups involved in the first tragedy are quite openly preparing for a second round.

To this end, the leading nationalist spokesman, Dmitro Yarosh, the former leader of the Right Sector, was invited to Odessa this month. There he explained his credo to his followers: “I am just not a democrat. My worldview is that of a Ukrainian nationalist. I believe that popular national government is very good, but only when democracy does not threaten the very existence of the state. We sometimes play at democracy with the likes of Kivalov [a member of parliament from Odessa — NP], with [Odessa’s mayor] Trukhanov . . . but in war time this is never good” he said, adding “the enemy needs to be dealt with as he is always deal with in wartime–neutralized.”

Recently, both the military wing of his Yarosh’s new organization, and the Ukrainian Volunteer Army, have been mobilized and, according a statement they released to the press, are ready to move on Odessa at a moment’s notice.

Meanwhile, local Euromaidan activist Arsen Grigoryan has given authorities just one week to prevent any commemorative gatherings from taking place on May 2, especially ones that might include government officials, or “fake parliamentarians from Europe.” If the authorities refuse to heed these warnings, he said, the consequences will be on the head of Odessa’s mayor, Gennady Trukhanov.

The radical nationalist’s sudden concern seems to have been inspired by the groundswell of participation at this year’s commemoration of the liberation of Odessa from Nazi occupation on April 10 [report below].

Traditionally this is a rather low key event, that involves a ceremonial wreath laying at the monument to the Unknown Sailor in Shevchenko Park. This year, however, several thousand people joined the wreath laying ceremony, some of whom even added Russian colors to the wreaths. This outrage caught the attention of vigilant nationalists, who then moved to disrupt the ceremony. In an unexpected twist, however, local police intervened to defend the participants against the now customary assault by radicals.

The nationalists blamed state prosecutor, Georgy Stoyanov, for this debacle, and proceeded to block entry to the state procuracy building until he was removed from office. After succeeding in this effort, they promptly moved their protest to Odessa’s City Hall, where they are now seeking the resignation of the popularly elected mayor of Odessa, Gennady Trukhanov.

Rather uncharacteristically, the region’s appointed governor, Mikheil Saakashvili, has yet to voice his opinion about this confrontation. On the one hand, he stands to gain political clout if he can shift the blame for these disturbances to mayor Trukhanov, whom he bitterly resents for ostensibly thwarting his reform efforts.

On the other hand, however, he surely knows that the radical nationalists view him as just another by-product of the corrupt and treacherous Poroshenko regime; moreover, one whose only loyalty is to his own political ambitions. Perhaps most unforgivably, for radical nationalists, he is also a foreigner.

All sides are now mobilizing in what is shaping up to be a decisive test of wills between government authority and the radical nationalists. The city is being flooded by radical activists, and governor Saaskashvili says that a thousand additional National Guard troops are going to be deployed to Odessa where, as he puts it, there are clear signs of “the collapse of Ukraine as a state.” The Ministry of Internal Affairs, however, says it has received no such orders, and is merely advising Odessans to prepare for “hot May holidays.” The stage is nearly set for the next bloody confrontation between the “patriots” and the “fascists.”

This time, however, the West need not stand by helplessly and watch. There is still a chance of averting another tragedy, if the Western media draws timely attention to the current preparations for it. A significant Western media presence on the ground during the critical week from May 2 to May 9, could conceivably lead the radical nationalists to reconsider their violent strategy.

Turning a blind eye to the gathering storm, by contrast, will only embolden the most radical elements in society, and further erode respect for law and order in Ukraine.  As the U.S. State Department’s Deputy Spokesperson, Mark Toner, has aptly noted, when asked about this issue, “all of us bear responsibility to do everything in our power to reduce the capacity of militants and extremists to carry out these kinds of violent activities.”

Nicolai Petro is an academic specializing in Russian and Ukrainian affairs, currently professor of political science at the University of Rhode Island. He spent 2013-2014 as a US Fulbright Scholar in Ukraine.