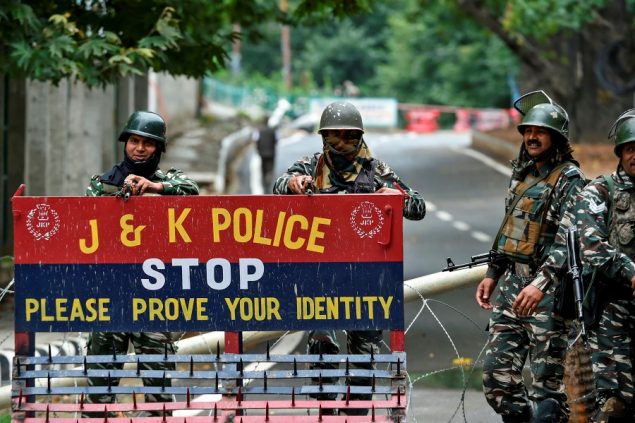 ”‘Kashmir is not the property of India or Pakistan,’ Nehru said in 1952. ‘It belongs to the Kashmiri people.’ But the far-right Hindu nationalist Rashtriya Swayamsevak Sangh, the parent organisation of the BJP, has long insisted that ‘Kashmir belongs to India,’ and a succession of governments in Delhi have behaved as if it does for decades.”

The news came like a declaration of war: Article 370 of the Indian Constitution is gone. It gave the people of Jammu and Kashmir a measure of autonomy: a separate assembly, a separate flag, the exclusive right to residency and property-ownership in the state. On the morning of 5 August, the Indian home minister, Amit Shah, scrapped it. No Kashmiris had been consulted; none of them were informed in advance. No debate or deliberation took place. The next day the Indian Express, a supposedly anti-establishment newspaper, published a giant picture of Narendra Modi congratulating Shah under the headline: ‘History, in one stroke.’

In the days before, the Indian army had ordered all tourists and pilgrims out of Kashmir, emptying the valley of everyone but Kashmiris. Democratically elected leaders were arrested. Kashmir is now completely isolated from the world: phone lines, cable TV and the internet no longer work. Kashmiris are not allowed to talk to each other or to anyone in India. The police patrol the streets with megaphones, warning people not to come out of their houses. On Indian TV, we see images of reporters stopping men as they come out of mosques: ‘Are you happy about it?’ the reporter asks. The man replies, and the reporter then turns to face the camera: ‘He is also happy about it.’

‘Kashmir is not the property of India or Pakistan,’ Nehru said in 1952. ‘It belongs to the Kashmiri people.’ But the far-right Hindu nationalist Rashtriya Swayamsevak Sangh, the parent organisation of the BJP, has long insisted that ‘Kashmir belongs to India,’ and a succession of governments in Delhi have behaved as if it does for decades. To grow up in India is to grow up ignorant about Kashmir. And that such ignorance should persist in the Indian mind suits the RSS, which despises India’s secular constitution and our founding fathers: Gandhi, Nehru, Ambedkar, Patel.

In 2016, three students at the Jawaharlal Nehru University in Delhi were arrested and charged with sedition for taking part in a protest to commemorate the executions of two Kashmiri separatists and for chanting Kashmiri freedom slogans. The debate moved out of student unions into the streets, where public opinion was shaped by propaganda. The TV news portrayed any form of dissent as ‘anti-India’. In the streets of Kashmir, the army, emboldened by these opinions, became more brutal with protesters. They used ‘non-lethal pellet guns’ – i.e. shotguns loaded with lead pellets – on the crowds. They injured three thousand demonstrators, blinding almost a thousand people. Kashmir changed that summer. Many of the militants now fighting in Kashmir have PhDs. They took up arms only when everything else, including their education in India, had failed them.

We are all now encouraged by the government to have a ‘stand on Kashmir’. What they really want us to do is cheer on the Indian army. You are for the army or against it; either a Hindu nationalist or ‘anti-India’. The media pitted the army against every Muslim in Kashmir: civilians, militants and politicians. Even attending funerals in Kashmir was branded ‘anti-India’. Kashmir was depicted as costing us something: our money, our army, our patience. Six months ago, when a local boy blew himself up killing forty troops, Kashmiri men across India were beaten up in retaliatory attacks. So much of our time since 2016 has been spent being told by the media that ‘Kashmir is a problem’, we have finally become a society fully invested in finding a solution – no matter how bloody it may be.

When soldiers are killed in Kashmir, the Indian papers publish their photographs; when civilians are killed, many of them teenagers, we are never shown their faces. In June 2018, the UN published its first ever report on human rights abuses in Jammu and Kashmir. It found that the army ‘used excessive force that led to unlawful killings and a very high number of injuries’. The Indian Express reported the story as ‘India lodges protest over rights status in Kashmir.’ This year, the UN published an update; the paper ran only the government’s response, on page 7. The case for Kashmiri self-determination has been all but erased. Together with the Indian government, the Indian media, too, occupies Kashmir.

Protesting against the occupation of Kashmir has never been ‘anti-India’. Kashmir was occupied by Indian troops in October 1947, two months after independence from Britain, but more than two years before the Republic of India was founded: the constitution came into force in January 1950. India is not the army; it is the constitution. If anything is ‘anti-India’, it’s the removal of Article 370. Today India celebrates the 72nd anniversary of independence from British rule. Occupied Kashmir remains under military lockdown.