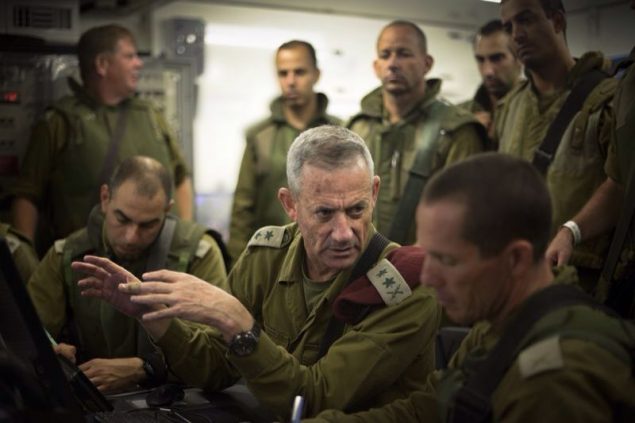 In a campaign attack on Israel’s prime minister, Monday, Gantz declared that, unlike Netanyahu, he would have allowed US congresswomen Ilhan Omar and Rashida Tlaib to visit Israel and the occupied territories.

Gantz’s contention that Israeli military occupation and colonization is a blessing to Palestinians is a direct echo of South Africa’s apartheid rulers who insisted that their brutal white supremacist regime was good for Black people.

Writer Ben White pointed to a 1977 New York Times interview with John Vorster, who was then prime minister of South Africa’s racist regime.

“The standard of living of the South African Black is two to five times higher than that of any Black country in Africa,” Vorster claimed.

This assertion was a staple of South African propaganda as the global boycott, divestment and sanctions movement gained strength during the 1980s.

It is not surprising, as colonialists always claim that their violent rule is a gift to the people they exploit and oppress.

Gantz is the cliched colonial overlord who thinks his people are so enlightened, and ours so barbaric, that he's doing us a favor by keeping us under his military boot. https://t.co/XgY42DmVqL

The echoes of apartheid South Africa’s propaganda in Israel’s current efforts are strong:

And similar to the South African racists who tried to fight the isolation of their regime, Gantz declared that “everybody who cooperates with BDS is operating against the state of Israel.”

The former army chief also claimed that BDS – the boycott, divestment and sanctions movement for Palestinian rights – is a “form of anti-Semitism.”

It is in fact an anti-racist movement rooted in international law and universal rights.

Gantz’s statements show that despite efforts to whitewash him as an alternative, he represents nothing different from Netanyahu.

That same day there will be a court hearing in the Netherlands in Ismail Ziada’s lawsuit against Benny Gantz.

PLEASE SHARE WIDELY The #Ziada court case on September 17 in the Hague is the first ever civil claim against the #Israeli army for killing civilians during its attacks on #Gaza in 2014. We are demanding #justice for #warcrimes You can read more here https://t.co/iT7Q61Yqej

Ziada, a Palestinian-Dutch citizen, is suing Gantz and another Israeli commander for the 20 July 2014 attack on his family’s home in Gaza’s al-Bureij refugee camp.

Ismail Ziada is suing two Israeli generals for the deaths of six relatives during Israel’s 2014 attack on Gaza. (via Facebook)

The 2014 assault on Gaza commanded by Gantz killed 2,200 Palestinians, including 550 children.

Far from being ashamed of his crimes, Gantz actually ran ads in Israel’s April election – which failed to produce a clear winner, thus precipitating this September’s poll – boasting about how many Palestinians he slaughteredin 2014.

EU “dialogue” with a war criminal

Gantz’s blood-soaked record and advocacy of colonialism also provide a yardstick by which to measure the European Union’s alleged support for human rights.

Instead of standing with Gantz’s victims and their campaign for justice, the EU is boosting the perpetrator.

Just last month, Emanuele Giaufret, the EU ambassador in Tel Aviv, and his European colleagues met for a cozy chat with Gantz.

With my EU colleagues it was a great pleasure to host @gantzbe today as part of our regular 🇪🇺 Ambassadors' meetings with 🇮🇱 political leaders to discuss the domestic, regional & security situation and EU-IL cooperation. We look forward to continuing the dialogue https://t.co/YkzmOauhHJ

“We look forward to continuing the dialogue,” Giaufret tweeted.

It goes to show that there is no level of racism and crime that an Israeli leader can commit against Palestinians that will disqualify them from the EU’s warm embrace.

Let’s hope Dutch judges have the sense of justice, decency and courage that most of Europe’s diplomats and politicians so abjectly lack.