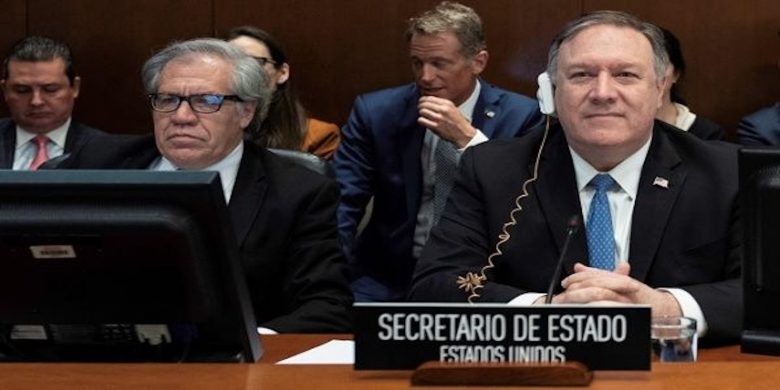 A total of 18 countries rejected the interventionist statement proposed by Argentina at the OAS.

In a new episode of U.S. Interventionism in Latin America, the Organization of American States (OAS) held Thursday a session to affirm an interventionist declaration against the constitutional government of the president of Venezuela Nicolas Maduro and in favor of the unconstitutional and illegal actions of the Venezuelan right-wing who is supporting the self-proclaimed ” interim president” Juan Guaido.

A total of 18 countries rejected the interventionist statement proposed by Argentina, in a meeting headed by the United States Secretary of State Mike Pompeo. The statement urged the countries members of the OAS to recognize the opposition lawmaker Juan Guaido as president, who proclaimed himself in an act that is unconstitutional and void.

Only 16 out of the 34 countries that are members of the OAS supported the U.S.-sponsored statement. Pompeo gave an interventionist speech alleging that “the time of debate is done,”  and called “illegitimate” the presidency of democratically and constitutionally elected President Nicolas Maduro.

In the meeting, “the scene was that of Secretary of State (U.S.), Mike Pompeo, at the head of all alongside the Secretary-General, Luis Almagro, dictating practically the policies that the rest of the allied governments were dedicated to repeating,” said teleSUR correspondent in Washington, Alina Duarte.

The speech given by the U.S. and its right-wing allies is based on an alleged humanitarian help for Venezuela to be given to Guaido, but the sanctions imposed mainly by the U.S. on Venezuela is what has brought a difficult situation to the South American country.

The OAS has been placing pressure on the Bolivarian government of Venezuela for years, and the Secretary-General Almagro, was one of the first officials to recognize Juan Guaido almost immediately after he had sworn himself in.

Venezuelan Foreign Minister Jorge Arreaza thanked U.S. activist Medea Benjamin, member of the non-governmental organization (NGO) Codepink, who denounced the attempted coup against the Bolivarian government when she interrupted the meeting and shouted slogans against the regime change attempt.

“With her protest, she revealed the macabre coup plan against Venezuela, we will always prevail, thank you!” said the Venezuelan diplomat. During Pompeo’s speech, the activist held up a banner that had the message “a coup is not a democratic transition!”

An activist with @codepink disrupted a meeting of the OAS to denounce their role in the coup underway in Venezuela. pic.twitter.com/SDiHasAHsc