OAS at the vanguard of the (ongoing) coup in Bolivia 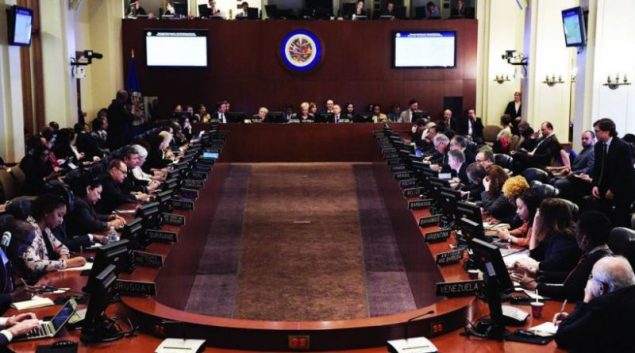 The Permanent Council of the OAS has demanded a second round in the Bolivian elections despite the results that give Evo Morales a winner in the first round (Photo: EFE)

The stance taken by the Organization of American States (OAS) with regard to the ongoing conflict in Bolivia is not showing any sign of improvisation. The regional institution took for itself the advances of “fraud” by the local opposition and tipped it towards an electoral prerogative impossible to fulfill.

Click to read the original Spanish article in Mision Verdad

Morales has denounced the role of the regional organization in the conflict.

The prominence that the Organization of American States (OAS) is taking in the Bolivian conflict does not seem to have any sign of improvisation. The regional institution took for itself the advances of “fraud” by the local opposition and tipped it towards an electoral prerogative impossible to fulfill.

Some countries convened an extraordinary session of the OAS Permanent Council that took place on Wednesday, October 23, in which there were those who defended the claims of “fraud” while others suspected the legitimacy of the complaints about the recent electoral process in the Andean-Amazonian country.

From the preliminary report

In this extraordinary meeting, the preliminary report of the OAS Electoral Observation Mission was presented by Antonio González, ex-chancellor, in which conclusions derived from opposition complaints about the entire process before the elections and “the lack of trust in the electoral body.” 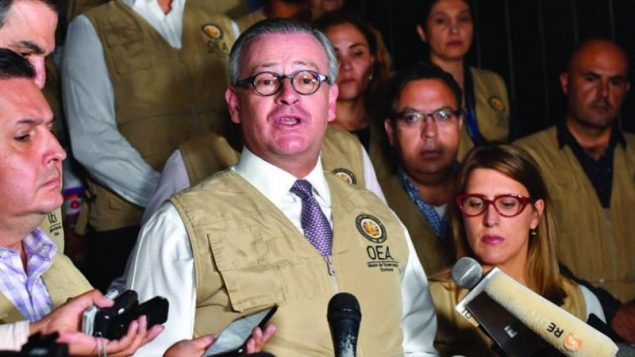 The technical aspects in the delay of the transmission of the preliminary results by the Supreme Electoral Tribunal (TSE) were the OAS’s anchor to confirm the allegations, which is not enough proof of any fraud. However, the report presents the previous motive as the motive for the increase of “tensions in the street”, and not the partisan call of Carlos Mesa and other organizations that have called for destabilization on Bolivian land.
For the Electoral Observation Mission, if the results do not reflect the measurement data it has in hand and the advanced complaints of the Bolivian opposition, it is best to “call a second round”:
“The results of an election must be credible and acceptable for the entire population not only for one sector. At the moment, with 96.78% of the rolls recorded, the final calculation makes a difference of 9.48% between the binomials most voted, which would require a second round if that difference is maintained. In the event that, after the calculation is completed, the margin of difference is greater than 10%, it is statistically reasonable to conclude that it will be for a very small percentage. evidenced in this electoral process, it would continue to be a better option to convene a second round.”
The OAS brings up this preliminary report before the final results are published, in an attempt to consolidate at the hemispheric level the narrative line that calls into question the electoral victory of Evo Morales prior to any official announcement of the TSE. In this way the political, institutional media influence belt of the United States in the region turns its attention to Bolivia while imposing a type of fabrication.

Of the permanent council

In Washington, home of the OAS and setting for the extraordinary meeting, there were diverse reactions to the preliminary report.

In addition, the Permanent Council gave voice to Carlos Mesa through the envoy of Juan Guaidó before the OAS, Gustavo Tarre Briceño, who read a statement from the Bolivian presidential candidate in which he exposes his position before the Bolivian conflict:
“These actions of the TSE are generating a state of convulsion in my country because the citizenry perceives a maneuver of fraud, to avoid the completion of the second round preventing the next president of Bolivia from being elected.”
Thus, Tarre Briceño “represented” in the OAS two presidents who do not exist: one self-proclaimed in Venezuela and another in Bolivia that pretends to be with the support of Washington.

Of the current coup

In the early hours of this October 24, the final victory of Evo Morales in the first round was officially confirmed, an irreversible trend. 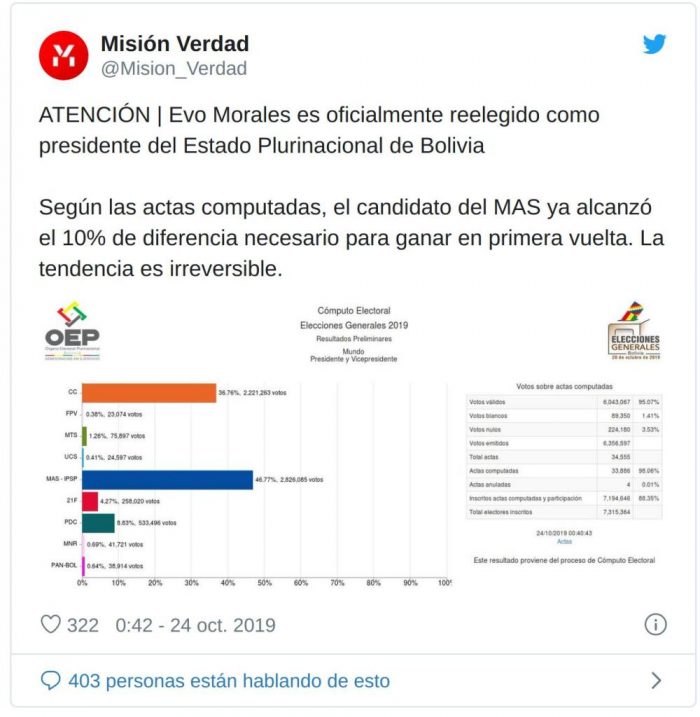 This morning the re-elected president gave statements to his followers to celebrate the results, where he again denounced the “internal and external coup d’etat.”

The strategy of the Bolivian government at the external level is based on calling in the OAS for its involvement in the final counting of the votes, an audit that the regional institution requires to be “binding.” 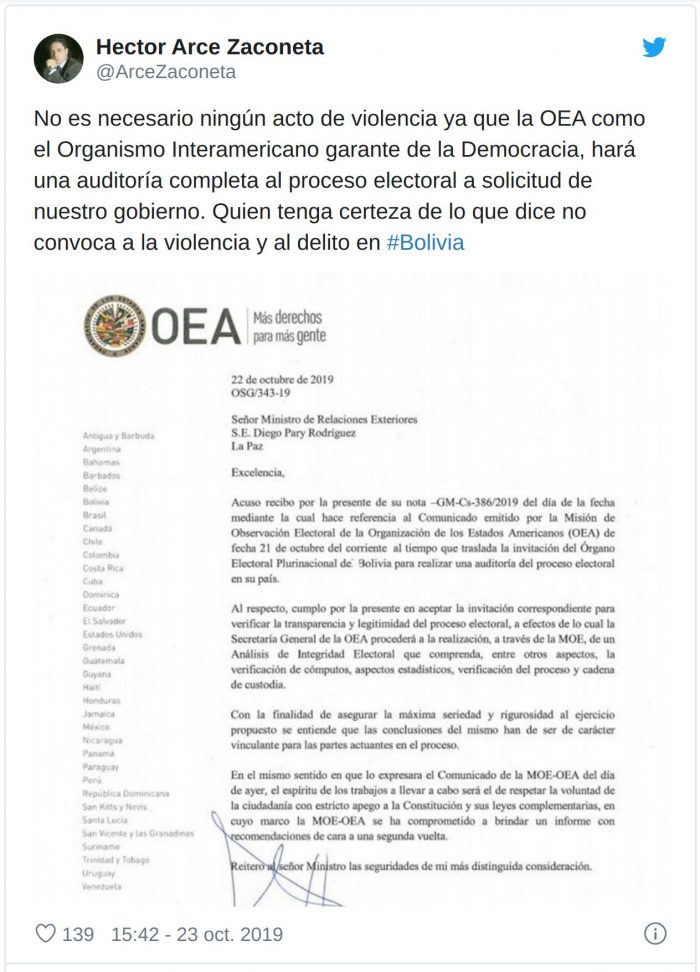 Although the audit be done and the conclusions are the re-election of Evo Morales, both the local opposition and the OAS build an atmosphere of tension around the demand for a second round announcing a possible deepening of the conflict in Bolivia.
In that sense, Carlos Mesa and 11 opposition politicians created the Defense of Democracy Coordinator as a kind of pressure block before the Bolivian institutions, with the elevation of the “fraud” allegations without evidence but with some mobilization of civilian committees and political parties centered in this body. 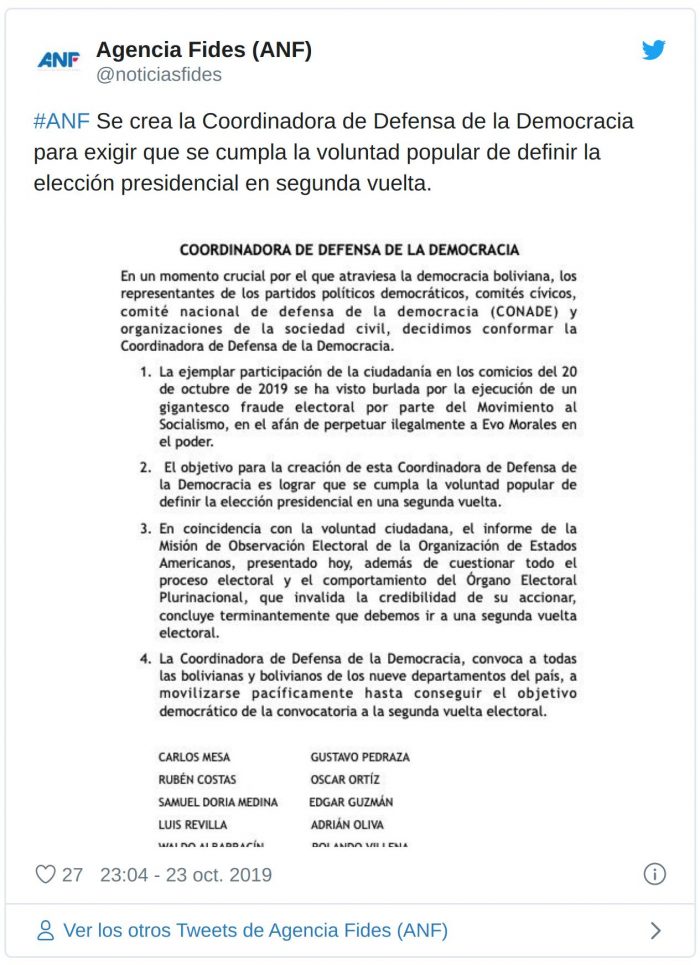 The same Coordinator of Defense of Democracy supports its foundation in the preliminary report of the OAS; the “second round” is a “duty” of the TSE, according to the statement.
Mesa said after meeting with the other opponents to form such a platform: “Mr. Morales, in his message to the nation, began by talking about a coup d’etat and clearly pointed to me, in particular, as being responsible. My first response clear and categorical to this incredible accusation, is that if there is someone who has systematically broken and broken the constitutional order of Bolivia, it is Evo Morales.”
In this direction, the emergence of the OAS (the “external coup”) gave rise to the “internal coup” taking on more muscle and heading towards criminalizing speech about what the Evo Morales government does or does not do. This semantic maneuver transfers the responsibility of any interruption of the constitutional order to the Bolivian government for “not attending to the citizen’s will”, as the preliminary report cited says.
With these slogans as a framework, the OAS takes the forefront of destabilization in Bolivia, with an agenda that bursts into the electoral scene and places the very bandied about “fraud” as an excuse for the coup d’etat.