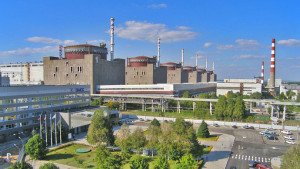 Ukraine is heavily dependent on nuclear energy – it has 15 reactors generating about half of its electricity. Ukraine receives most of its nuclear services and nuclear fuel from Russia, but is reducing this dependence by buying fuel from Westinghouse. In 2004 Ukraine commissioned two large new reactors. The government plans to maintain nuclear share in electricity production to 2030, which will involve substantial new build. The government is looking to the West for both technology and investment in its nuclear plants.

A large share of primary energy supply in Ukraine comes from the country’s uranium and substantial coal resources. The remainder is oil and gas, mostly imported from Russia. In 1991, due to breakdown of the Soviet Union, the country’s economy collapsed and its electricity consumption declined dramatically from 296 billion kWh in 1990 to 170 in 2000, all the decrease being from coal and gas plants. Today Ukraine is developing shale gas deposits and hoping to export this to western Europe by 2020 through the established pipeline infrastructure crossing its territory from the east. 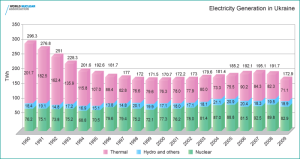 Read the remainder of this lengthy document and see the many charts and graphs accompanying it by going to the weblink above.