SEOUL/BEIJING – North Korea accused the United States on Tuesday of pushing the Korean peninsula to the brink of nuclear war after a pair of strategic U.S. bombers flew training drills with the South Korean and Japanese air forces in another show of strength. Two supersonic B-1B Lancer bombers [Wikipedia] were deployed amid rising tensions over North Korea’s pursuit of its nuclear and missile programmes in defiance of U.N. sanctions and pressure from the United States. 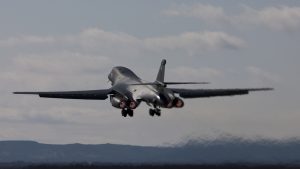 The flight of the two bombers on Monday [April 1] came as U.S. President Donald Trump said he would be “honoured” to meet North Korean leader Kim Jong Un in the right circumstances, and as his CIA director landed in South Korea for talks.

North Korea said the bombers conducted “a nuclear bomb dropping drill against major objects” in its territory at a time when Trump and “other U.S. warmongers are crying out for making a preemptive nuclear strike” on the North.

“The reckless military provocation is pushing the situation on the Korean peninsula closer to the brink of nuclear war,” the North’s official KCNA news agency said on Tuesday.

Tensions on the Korean peninsula have been high for weeks, driven by concerns that the North might conduct its sixth nuclear test in defiance of pressure from the United States and Pyongyang’s sole major ally, China.

The U.S. military’s THAAD anti-missile defence system has reached initial operational capacity in South Korea, U.S. officials told Reuters, although they cautioned that it would not be fully operational for some months.

China has repeatedly expressed its opposition to the system, whose powerful radar it fears could reach inside Chinese territory. Foreign Ministry spokesman Geng Shuang again denounced THAAD on Tuesday. “We will resolutely take necessary measures to defend our interests,” Geng said, without elaborating. [See report below.]

Asked about Trump’s suggestion he could meet Kim, Geng said China had noted U.S. comments that it wanted to use peaceful means to resolve the issue. Trump has been recently been full of praise of Chinese President Xi Jinping’s efforts to rein in its neighbour.

“China has always believed that using peaceful means via dialogue and consultation to resolve the peninsula’s nuclear issue is the only realistic, feasible means to achieve denuclearization of the peninsula and maintain peace and stability there, and is the only correct choice,” Geng told a daily news briefing.

It was widely feared North Korea could conduct its sixth nuclear test on or around April 15 to celebrate the anniversary of the birth of the North’s founding leader, Kim Il Sung, or on April 25 to coincide with the 85th anniversary of the foundation of its Korean People’s Army. The North has conducted such tests or missile launches to mark significant events in the past. Instead, North Korea conducted an annual military parade, featuring a display of missiles on April 15 and then a large, live-fire artillery drill 10 days later.

Acting South Korean president Hwang Kyo-ahn called for stronger vigilance because of continuing provocation by North Korea and for countries such as China to increase pressure on the North.

Trump drew criticism in Washington on Monday when he said he would be “honoured” to meet North Korea’s young leader. “If it would be appropriate for me to meet with him, I would absolutely, I would be honoured to do it,” Trump told Bloomberg News.

Trump did not say what conditions would be needed for such a meeting to occur or when it could happen.

Trump warned in an interview with Reuters on April 27 that a “major, major conflict” with North Korea was possible, while China said last week the situation on the Korean peninsula could escalate or slip out of control.

In a show of force, the United States has already sent an aircraft carrier strike group, led by the USS Carl Vinson, to waters off the Korean peninsula to conduct drills with South Korea and Japan.

North Korea test-launched a missile on Saturday [April 29] that appeared [sic] to have failed within minutes, its fourth successive failed launch since March. It has conducted two nuclear tests and a series of missile-related activities at an unprecedented pace since the beginning of last year.

The North is technically still at war with the South after their 1950-53 conflict ended in a truce, not a treaty, and regularly threatens to destroy the United States, Japan and South Korea.[1]

Note by New Cold War.org:
[1] ‘The North is technically still at war’, says the above by Reuters. Which is an ‘interesting’ twist of phrase and of history. Here, in contrast, is how Wikipedia describes the United States’ abrogation of a vital clause of the 1953 armistice agreement ending the U.S. war in Korea:

Paragraph 13(d) of the Armistice Agreement mandated that neither side introduce new weapons into Korea, other than piece-for-piece replacement of equipment. In September 1956 the U.S. Chairman of the Joint Chiefs of Staff Admiral Radford indicated that the U.S. military intention was to introduce atomic weapons into Korea, which was agreed to by the U.S. National Security Council and President Eisenhower.[33] However paragraph 13(d) prevented the introduction of nuclear weapons and missiles.[34] The U.S. unilaterally abrogated paragraph 13(d), breaking the Armistice Agreement, despite concerns by United Nations allies.[35][36][37] At a meeting of the Military Armistice Commission on June 21, 1957, the U.S. informed the North Korean representatives that the United Nations Command no longer considered itself bound by paragraph 13(d) of the armistice.

Following the abrogation of paragraph 13(d), the Neutral Nations Supervisory Commission (NNSC) largely lost its function and became primarily office based in the DMZ with a small staff…

In a lengthy, 1997 article in The Atlantic magazine, historian and Korea expert Bruce Cumings reminds the reader that the United States introduced nuclear weapons onto Korean soil beginning in 1958 and has practiced nuclear war scenarios in the country ever since, including with its naval fleet. Cumings writes in the conclusion of his article: “One outside power continues to bear the greatest responsibility for peace on the Korean peninsula and for failing to resolve the Korean conflict even 50 years after it began: the United States.”

The Korean War’s brutality turned the stomachs of America’s most hardened soldiers, by Darien Cavanaugh, published on War Is Boring, May 2, 2017

Exclusive: U.S. airman’s confession on use of germ warfare during the Korean War, published by ‘Valtin’ (Jeff Kaye) on his blog Invictus, June 11, 2016