Normalising the Far-Right in Poland 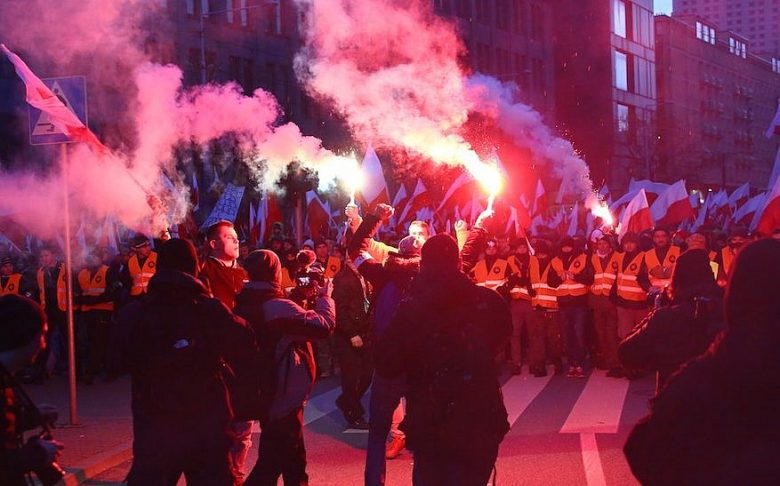 This original article, written for NCW by Gavin Rae, examines the rise of the far-right in Poland and its increasing political influence in the country as a consequence of the governing the Law and Justice Party’s shift to the right.

November 11 marked one hundred years since Poland regained independence. However, this important date in the country’s history was dominated by a huge march of Polish ‘patriots’, organised by the far-right, through the streets of Warsaw. This year the march was co-joined with a demonstration held by the Polish government and President. Although the far-right remains relatively small in Poland, it is gaining increasing political influence through the general shift to the right under the government of the Law and Justice Party.

It is important to understand the history of the ‘Independence March’ in Warsaw. It had originally been organised by three of Poland’s main far-right groups: All-Polish Youth (Młodzież Wszechpolska), the National-Radical Camp (Obóz Narodowo-Radykalny) and the National Rebirth of Poland (Narodowe Odrodzenie Polski). During its early years, these were small demonstrations on which far-right and fascist symbols and slogans were openly displayed. Anti-fascists organised counter-demonstrations and often managed to successfully block the march.

However, from 2011 a new coalition was formed to organise the demonstration and the far-right roots of the march were disguised. An alliance was formed between the far-right and the growing conservative right. The demonstrations grew in size, boosted by the growth of the Law and Justice Party as the country’s main opposition party. The far-right had managed to bring different sections of the conservative and patriotic right under its banner. From 2014 the attempt by anti-fascists to block the march was abandoned – simply because it was too weak to do so and the far-right had managed to convince many that this was a march for all ‘patriots’.

This new alliance has been further strengthened after the Law and Justice Party formed a government in 2015. This right-wing administration has systematically promoted an ideology incorporating Islamophobia and anti-refugee sentiments, whilst being silent and uncritical of the activities of the far-right. This has helped to facilitate the growth of nationalist and xenophobic sentiments within sections of society, based around the idea that Poland is one of the last bastions defending a Christian and white Europe. This is part of an international trend, whereby mainstream right-wing governments court the far-right and provide them with a fig-leaf of political legitimacy.

Banning and Supporting the March

This year’s ‘Independence March’ took on particular significance due to it being the centenary of Poland’s independence. Yet, despite being in office for over two years, the governing Law and Justice Party failed to prepare any alternative to the nationalist ‘Independence March’.

In the week leading up to the march the outgoing Mayor of Warsaw Hanna Gronkiewicz-Waltz (from the centre-right party Citizens’ Platform) banned the march, citing security concerns as the reason for doing so. Gronkiewicz-Waltz was Mayor of Warsaw from 2006, yet had done nothing against the ‘Independence March’, even when it was marred with violence and vandalism. Her action this year was taken at the end of her term in office and was predictably overturned by the courts. Meanwhile, President Andrzej Duda and Prime Minister Mateusz Morawiecki announced that they would sanction an official march at the same venue as the ‘Independence March’. This meant that once the ‘Independence March’ ban was reversed, the two demonstrations effectively fused.

The numbers at this year’s march were swelled by the importance of the anniversary, anger at the attempt to ban the march and its eventual official sanctioning by the government. Around 200,000 demonstrators marched through the streets of the Polish capital. The most prominent symbol on the demonstration was the Polish flag and the organisers were keen to present it as being a march for all Poles celebrating the country’s independence. The organisations and banners of the far-right (such as the Celtic Cross) were present although only amongst a small minority of demonstrators and openly racist chants were marginalised. Some foreign organisations of the far-right also attended the march. Scandalously, this included representatives of the Italian Forza Nuova,  a party whose leaders include someone who has publicly worn a t-shirt mocking the victims of the holocaust with the slogan “Auschwitzland”.

The majority of the march was made up of those who would not identify themselves as belonging to the far-right. On social media it has been common for participants to take photographs of themselves or their children smiling and waving the Polish flag, mocking the idea that they are indeed fascists. Such attitudes have been intensified by uninformed statements by international journalists and politicians in the past, claiming that tens of thousands of neo-Nazis were marching in Warsaw.  Nevertheless, the question remains, why are such large numbers of people prepared to attend a march that has been organised by the far-right?

Fascist and far-right organisations are currently very small in Poland and have no significant electoral support. Also, although they are becoming more active on the streets, they are generally unable to mobilise large numbers of people outside of the November 11 ‘Independence March’. However, some of the slogans of these organisations about ‘defending the Christian Polish nation’, against the ‘enemies of the nation’ and multi-culturalism have entered the mainstream political discourse. This is combined with an extreme ideology of ‘anti-Communism’, which diverts attention away from the threat of racism and fascism and justifies a campaign against the whole of the left. The far-right is able to find support for their ideas within the ruling party and government, which gives it an inroad into a section of society usually beyond their reach. The huge attendance on the ‘Independence March’ cannot be explained as people being simply ignorant of what the march is about, but rather is due to the normalisation of racist views and ideology within large sections of society.

Whilst the anti-fascist organisations in Poland are no longer able to block the ‘Independence March’ they did successfully organise an  ‘anti-fascist street party’, which was attended by a few thousand people. Also, some small groups of counter-demonstrators attempted to disrupt the ‘Independence March’, including a group of feminist activists who managed to unfurl a banner at the front of the march with the slogan ‘Women Against Fascism’. Some of these women were injured after being removed from the demonstration and now face the threat of prosecution for ‘obstructing a lawful march’ (see the protest by Amnesty International against this here). Anti-fascists also organised a counter-demonstration against a nationalist march in the city of Wrocław on 11 November, with at least two people injured after bottles were thrown into the crowd of anti-fascists.

These events in Poland should serve as a warning as to what can happen when far-right ideas and organisations become normalised by the government. Anti-fascists in Poland face the task of attempting to reverse this process; severe the alliance of the state and the far-right; and prevent the mainstreaming of far-right ideology in Polish society.