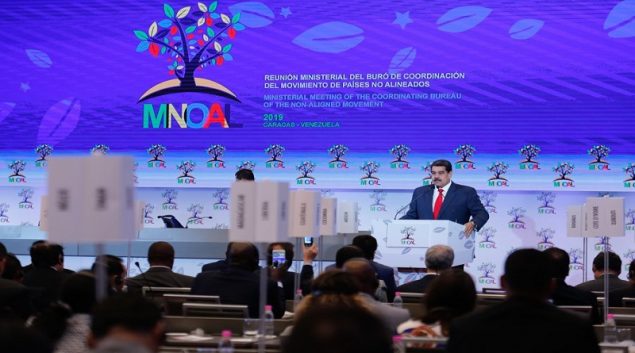 President Nicolas Maduro addresses the opening ceremony of the Non-Aligned Movement meeting in Caracas over the weekend. (Presidential Press)

The 120-member movement were holding a ministerial meeting in Caracas as a US spy jet reportedly violated Venezuelan airspace.

The Non-Aligned Movement (NAM) condemned US-led sanctions and called for the construction of a multipolar world after a summit held in Caracas.

Speaking at the opening ceremony Saturday, Venezuelan President Nicolas Maduro stressed that ending US global hegemony is a realistic goal.

“The construction of a world without hegemonic empires, a world of peace, of respect for international law, is neither an odyssey nor an unrealistic utopia,” he explained.

The final document signed by participant countries rebuked US-led sanctions and established a Venezuela-led workgroup which will study the effects and ways of mitigating sanctions against NAM countries. The joint declaration also encouraged NAM members to take cases of “economic aggression” to the UN’s International Court of Justice and condemned non-constitutional efforts to bring about regime change in Venezuela.

Washington currently has sanctions levied against a number of NAM countries, including Syria, Nicaragua, China, Iran, North Korea, Zimbabwe, Cuba and Venezuela. Sanctions against Venezuela have been intensified following Washington’s recognition of self-declared “Interim President” Juan Guaido in January 2019. The unilateral measures from the Treasury Department have targeted government and military officials, as well as several sectors of the Venezuelan economy, including banks, imports, and an oil embargo.

The United Nations has described sanctions as “illegal” and human rights violations, while an independent report from the Center for Economic and Policy Research claimed that the sanctions have cost over 40,000 lives since 2017.

Venezuela has presided over the NAM, which is the second largest international bloc of countries after the UN, since 2016, and is due to hand over the responsibility to Azerbaijan at the upcoming head of states summit in October.

In Caracas, Venezuela’s UN Ambassador and NAM Presidential Commissioner Samuel Moncada presented a work report for the period 2016-19 in which he stressed the collective weight of the NAM nations.

“In the world there are 193 countries and the United States [in backing self-declared “Interim President” Juan Guaido] cites only 54. Here there are 120, the international community is defending Venezuela (…) Two thirds of the United Nations believes that the government of Nicolas Maduro is the legitimate government of Venezuela,” he told participants.

Visiting delegates were also adamant in rejecting sanctions and efforts to oust the Maduro government.

These sentiments were also shared by the Palestinian Foreign Minister Riyad al-Maliki, who expressed that “We must confront the challenge [of building a multipolar world] or we must accept the will of the United States.”

Similar sentiments were also expressed in the interventions from a number of countries, including Russia, China, Syria, Belarus, Bolivia, Nicaragua, Cuba, and Vietnam.

Other themes discussed at the meeting included climate change; efforts to achieve peace and avoid war; the struggle for the control of natural resources; and conventional, biological, and chemical weapons. Venezuelan officials also took advantage of the summit to hold a series of bilateral meetings to strengthen commercial and diplomatic ties with visiting countries. 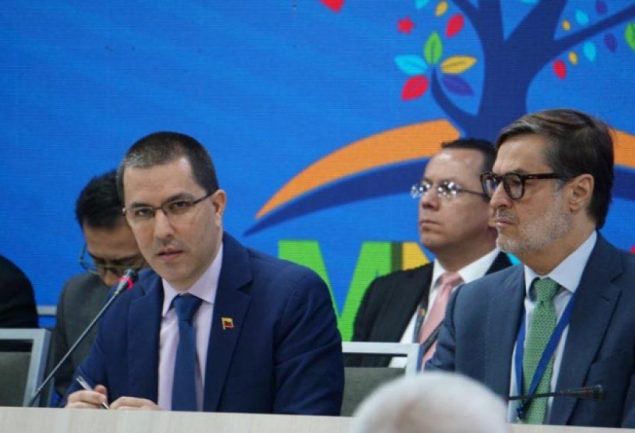 The weekend NAM conference came on the heels of a tense episode involving a US and two Venezuelan jets off the Caribbean country’s northern border.

Venezuelan Communications Minister Jorge Rodriguez gave a press conference on Monday morning in which he claimed the USAF EP-3 Aries II reconnaissance jet entered the country’s flight notification area, in which it needed to notify Venezuelan authorities. The failure to comply activated the protocol through which two Venezuelan Su-30 jets escorted the US airplane back into international airspace.

Venezuelan armed forces likewise condemned the episode, claiming that “efforts to communicate [with the US jet] were unfruitful” and that it turned off its transponder system to avoid being identified. They also alleged that this is the 76th incident of this type in 2019 and rejected US “aggressions” and “violation of international agreements.”

For its part, the US Southern Command equally called Venezuelan actions “aggressive” and “irresponsible,” arguing that the US jet was on a “multi-nationally recognized & approved mission” and in international airspace. Washington also took aim at Moscow, which has several military supply and cooperation deals with Caracas, saying that the episode “demonstratesRussia’s irresponsible military support to Maduro’s illegitimate regime.”

An infogram released by the Venezuelan armed forces depicts the alleged events of Friday in the following order: 1- 09.52: radio contact with the US EP-3E coming from Central America established; 2- 10.25: Venezuelan armed force jets deployed from the ‘TTE Luis del Valle Garcia’ airbase in Barcelona, Anzoátegui State; 3- 10.46: the US EP-3E entered Venezuelan air space; 4- 11.33: interception, identification, and assistance to the EP-3E jet; 5- 11.43: persuasion and expulsion of the US EP-3E jet from Venezuelan airspace; 6- 12.20: the Venezuelan jets returned to the ‘Cap Manuel Rios’ airbase in El Sombrero, Guárico State.

Edited by Ricardo Vaz from Caracas.