‘No humanism or democracy’: Russian Foreign Ministry slams West, US for wanting to ‘exploit’ Covid-19 crisis in Venezuela 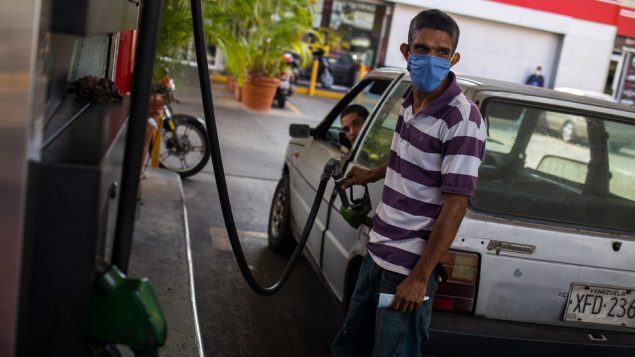 A man wears a face mask as a precautionary measure against COVID-19, in Caracas, Venezuela. March 23, 2020. © AFP / Cristian Hernandez

Certain political groups in the West will not hesitate to use the difficulties brought on by the coronavirus pandemic to carry out their long-lasting plans to topple the Venezuelan government, Russia’s Foreign Ministry has said.

Certain political groups in the West will not hesitate to use the difficulties brought on by the coronavirus pandemic to carry out their long-lasting plans to topple the Venezuelan government, Russia’s Foreign Ministry has said.

“Unfortunately, we are seeing how certain countries – we should say, not the countries as a whole, but certain political forces there – are still being driven… by the desire to exploit the difficult situation in the world, the grave epidemiological situation in Venezuela to achieve their political goals,” Foreign Ministry spokesperson Maria Zakharova told reporters on Thursday.

In particular, Zakharova called the drug trafficking charges brought by the US against Venezuela’s President Nicolas Maduro “fabricated.” She also compared Washington’s idea of forming a transition government in Venezuela to “a joke,”adding that the US announced its plans for Caracas amidst “a de facto global moratorium on all major political and social events” as the world battles the Covid-19 pandemic.

If we are to analyze the absurd plans [of the US] in the context of the pandemic, [we will see] that there is no humanism or democracy there.

Last month, the US Department of Justice charged Maduro and more than a dozen current and former high-ranking Venezuelan officials with conspiring with Colombian militants to “flood” the US with cocaine.

On Wednesday, US President Donald Trump announced that warships will be deployed to conduct anti-drug operations near Venezuelan shores. It is reported to be one of the largest American military operations in the region since 1989, when the US invaded Panama and imprisoned its leader Manuel Noriega on drug charges.

US Secretary of State Mike Pompeo, meanwhile, offered to form a “transition government” that would take over the country after Maduro’s supposed removal from power.

Caracas has blasted the increase of pressure from the US, with Foreign Minister Jorge Arreaza saying that Venezuela “does not accept, and will never accept, any patronage from any foreign government.”

A total of 144 people have tested positive for Covid-19 in Venezuela, while three patients have died, according to the data by Johns Hopkins University. The UN has called for the lifting of sanctions on several countries, Venezuelan among them, as they make it harder to acquire vital medicine.