There are no grounds to keep Russia sanctions in place, said member of the French National Assembly Thierry Mariani, who heads the parliamentary delegation currently on a two-day visit to Crimea. Trends Ukraine turmoil 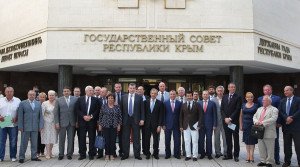 “As the US is lifting Cuba blockades, I see no reasons for Europe to keep Russia sanctions in place,” Mariani told reporters after speaking at the Crimean Parliament in Simferopol on Thursday. He added that he felt the effect of sanctions as the delegation’s mobile phones stopped operating because European companies refuse to provide service in the area.

The Crimean status referendum held on March 16, 2014 made it possible for the Crimean peninsula to avoid the scenario unfolding in eastern Ukraine, he said.

Mariani noted that he “observed the devastation and the people’s suffering with horror” while he was visiting war-torn Donbass two months ago. “We congratulate you that you managed to avoid that,” he said at a meeting with Crimea’s Parliament speaker Vladimir Konstantinov. “We welcome the courage of the Crimean Parliament because it was able to make this decision despite the difficult situation and a great risk of escalation [of tensions],” he added.

He reiterated that the visit of the French delegation aims to understand the situation in Crimea. He added that his first impression was great weather and no military personnel on the streets.

“I’m very happy to be here,” he told the Crimean lawmakers in Russian adding that the visit of the delegation caused an uproar in France.

He said the current visit proves the freedom and independence of the French lawmakers. “Regardless of our political orientation, we adhere to the views of Charles de Gaulle, who believed that above all is the will of the people.”

Yves Pozzo di Borgo, a member of the Senate from the Centrist Union, representing the city of Paris, was quick to recognize that the reality on the ground in Crimea does not reflect the media or political narrative in Europe. “I am very happy that I came here, because listening to you [residents of Crimea], I understand the position, which is not expressed anywhere – in any of the media in Europe, in none of the Parliaments of Europe, nor in the European Parliament or the Council of Europe, nor the OSCE,” di Borgo said.

Konstantinov, in turn, thanked the French delegation for making “a courageous political step” by visiting Crimea. He said that he is “proud” of the fact that the referendum was made possible and that the “lawmakers stood up for protection of their people for the first time for many years.”

He added that during those days the Crimean residents “lived through turmoil.”

“The outcome of the referendum was a reaction of the whole Crimean community to the events in Ukraine,” he said.

“Ukraine was like a boiling pot and the people were frightened of the situation in Kiev. After the funerals of people killed in Kiev, a wave of spontaneous protests swept through Crimea…The task set before the parliament was not to let the protests grow into unconstrained actions. A civil war seemed to be the main threat those days.”

Crimea rejoined Russia last March following a referendum where more than 96 percent of people voted in favor of reunification. The decision to hold a referendum was sparked by the refusal to recognize the new coup-imposed government in Kiev as legitimate. Crimea, which is home to an ethnic majority Russian population, feared that the new leadership would not represent their interests and respect their rights.

Considering Crimea’s decision illegal, the US and EU accused Moscow of annexing the peninsula and imposed economic sanctions on Russia. Following the escalation of violence Donbass, the Western states imposed further sanctions on Russia with Moscow responding with retaliatory restrictions.

Last April, Kiev launched a military operation in the country’s southeast after the Donetsk and Lugansk regions refused to recognize the new administration in Kiev. According to a recent UN report, the conflict has killed nearly 6,500 people, wounded over 16,000 and left 5 million people in need of humanitarian aid in the past year.

On Thursday Mariani told Rossiya’24 news channel that the public opinion in France is gradually shifting in Russia’s favor.

“The public opinion in France is changing step by step,” Mariani said. “We’ve had that story involving the Mistrals and many people in France think it is simply stupid, as a commodity that was promised was not delivered eventually and the contract was disrupted.”

“I think public opinion is making a gradual evolution,” he concluded. “I hope our trip to Russia will speed up this evolution, as the French government will have to give a bigger measure of attention to this opinion at a certain point.”

‘All is not well in France with Russia sanctions policy’: Interview on RT.com with writer John Wight

RT:  What does this visit of high-profile officials mean?

John Wight: It shows that all is not well within the French political class over the sanctions and the policy being followed by the Hollande government towards Russia. As is no surprise given that France is the second largest investor in Russia after Germany: 1,200 French companies were doing business in Russia and with Russia before the sanctions began in 2014. We’re looking at the cost of enumerable French jobs to the sanctions. This obviously had the deleterious impact on the French economy. And not to mention I think more important is the grievous impact its having on global security given the rise of terrorism across the world and the fact that Russia is a major economy, a major country, advanced country, and the idea they can be treated as an outcast going forward is really unsustainable and unrealistic.

RT:  The French Foreign Minister said he was shocked by the visit. Why did he react so strongly?

JW:  He is following a hawkish ideological line that comes from Washington that Russia has to be treated to a threat to European domination backed up by Washington. But as I said I think that a schism is starting to appear in France and all over the EU and in the US with regard to this policy – it is unsustainable. Those who follow this policy are leading the world to disaster because terrorism is growing, it is not going away. And the idea that we’re discussing a rapid reaction force, for example, in Eastern Ukraine and Latvia to contain Russia, when there is no such rapid reaction force being spoken about with regard to ISIS – it just shows you the cognitive dissonance that is driving this policy.

RT:  Will we see other European delegations visit the disputed region?

JW:  Yes, this is going to encourage other such delegations, people want to get to the bottom of this. They know that the standoff that is in place in Donbass is not going to last forever and they want to see how things are in Crimea. There was a referendum, overwhelmingly people there voted to rejoin the Russian Federation and…they are not living in conditions of unimaginable privation and suffering as the propaganda would have us believe. These delegations could only help the leaders who are responsible for the policy to come to their senses and understand that this situation in Eastern Ukraine, this crisis will not be resolved through confrontation or sanctions but only by negotiation.

RT: Will it have any influence on the sanctions policy do you think?

JW:  Perhaps not in the immediate term but they will have to going forward because as I said there are now having a deleterious impact on the European economy. Europe is still coming out of recession and these sanctions are not going to help Germany and France especially. They are the most exposed economies given their economic links to Russia. So it’s not only Russia that is suffering, it is also Europe. If the idea was to undermine Russian stability it’s had the exact opposite, we just had a poll which shows that that Vladimir Putin’s popularity in Russia has never been higher. So Russia is united, it has never been more stable and it’s not going to be brought to its knees by sanctions. It’s a really silly daft policy that must come to an end sooner rather than later.

The third siege of Crimea, by Thomas de Waal, The National Interest July 9, 2015

View:
Press conference in Moscow on July 25 of the delegation of French MPs following their two-day visit to Crimea (in French and Russian, duration one hour, 20 minutes)