No debate allowed as EU readies to extend Russia sanctions

Recently I wrote a piece for Russia Insider discussing how the EU really works. I pointed out that the veto small states supposedly have over key EU decisions is a fiction. Decisions are made by a small group who decide things between themselves and who because they control the EU’s bureaucracy can impose their decisions on everyone else. 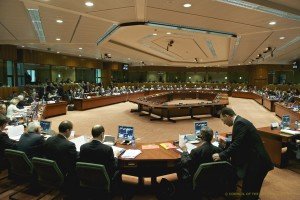 All show at a meeting of the European Council

An EU official – someone described as “close to the European Council” (the EU’s main policy making body) has basically confirmed as much in an interview with the Russian news agency TASS.

The subject discussed was the sectoral sanctions the EU has imposed on Russia, which are due to expire on 31st January 2016. A political decision to extend the sanctions was made by the five big EU states – France, Germany, Italy, Britain and Spain – after consultations with the US at the G20 summit at Antaliya in Turkey.

Italy subsequently delayed announcement of this decision saying more discussion was needed. In my piece I said Italy’s decision should not be taken seriously. The Italians were simply putting a marker down.

The source who has spoken to TASS has all but said the same thing. These are his words as TASS reports them:

“It is as simple as this: the EU Council has related the limiting measures with implementation of the Minsk accords. It is not an issue to be discussed, it is a political objective we have now. By and large, the Minsk accords are not implemented as of today, thus sanctions are to be extended. They say, for another six months.”

“At present, the work continues at the level of working groups. The plans are, the EU ambassadors approve it (decision) in a written procedure, though later on the procedure was postponed (at Italy’s insistence – AM) as the work still continues. Nobody is really in a hurry, since the sanctions expire only in late January.”

“No, this topic is not on the agenda (of the European Council meeting on 14th December 2015 – AM). I do not think any discussion will take place, and the reason is very simple: the agreement is the sanctions will remain until the Minsk accords are implemented. In fact, there is nothing to discuss, which is clear to everyone.

As to when a decision may be taken, the source said: “It is tough to say now on what day, as it is not clear yet what procedure will be used. But I do not think it will happen very soon. Anyway, there is quite a time to January 31.

While commenting on the media discussing sanctions, the source said “The very fact of the sanctions’ extension is a ready decision now.”

“Right, some EU countries speak for discussing the sanctions package at the level of ministers (including Italy, Luxembourg – TASS), others are ready to extend them automatically so that not to waste time discussing the Ukrainian crisis at the last meetings of this year, which will be aimed at settlement of many problems related to migration; however, as of today not a single EU country out of the list of 28 has spoken against extension of the limitation measures.”

Though these comments say no more than what I previously reported, their cynicism still takes the breath away.

The sanctions are to go on being extended until the Minsk Accords are “fully implemented”. No explanation is given as to what “fully implemented” means or who will decide that – especially since there is to be no discussion of the question (see below).

It is the Ukrainians who are not implementing the Minsk Accords – a fact now acknowledged by everyone including the German and French governments.  Nonetheless it is the sanctions on Russia that are to be extended. Taken literally this gives Kiev a veto over when the sanctions will be lifted.

The source does say that no EU member state has “spoken against extending” the sanctions. Since there is no discussion one wonders how he knows?

Another European diplomat also confirmed to TASS the sanctions “are bound to be extended”. He said the issues of milder or tougher sanctions “even have not been raised”.

“Nobody is going to review each of the sanctions. This work is very effort-consuming, and it is not reasonable to begin it under the conditions, where the situation in the zone of the Ukrainian conflict has not changed radically in either direction,” he said.

Apparently, even relaxing the sanctions is not going to be discussed because this is “very effort-consuming” – a bizarre comment given the pain the sanctions and Russia’s counter sanctions are causing European businesses and European agriculture.

Though information about how the EU works today is abundant, it still surprises me that there is still so little awareness of this. Even alternative media rarely touches on the question. Instead, one repeatedly comes across meaningless head counts of which countries supposedly oppose the sanctions as if that really mattered.

If the big five states agree that sanctions are to be extended, extended they will be. A decision to that effect will be published by the EU bureaucracy – which they control – as if all the EU states had agreed to it. None of the smaller EU states can veto this decision because – since it is not going to be discussed by the European Council or by the EU Council of Ministers – they are not being provided with a proper forum where they could exercise such a veto.

If they publicly objected to the way the decision was made – or if they ever were to try to impose a veto whether through their permanent representative or at a meeting of the European Council or of the Council of Ministers – their objection and their veto would be simply ignored and would go unreported.

There would, however, be serious repercussions, with threats made in private that their structural funds might be cut if they continued to rock the boat by publicly defying the official line.

Only two EU states are powerful enough to ensure their vetoes are always respected.  These are Germany and France.  Precisely because these two states control the EU they scarcely ever need to wield a veto since it is barely conceivable that the European Council or the Council of Ministers would ever take a decision they objected to.

Italy and Spain are strong enough to be listened to, but are not strong enough themselves to veto a decision without some support from other EU states, save in very exceptional circumstances which scarcely ever arise.

Britain is in an intermediate position. It has shown that it can veto decisions relating to the EU’s budget – to which it is a major contributor – but that it cannot veto anything else. The British have been unhappy about the process of EU integration pursued by the Germans and French for the last twenty years (“ever closer union”), but despite possessing a veto, they have been unable to prevent it.

None of the other EU states has any power of veto at all. Even when their electorates have voted against EU decisions in elections or referendums ,their objections have been ignored. What invariably happens is that if the results of such elections or referendums go against what the EU authorities want, they simply overrule them (as was the case with Greece) or instruct the state that held the elections or the referendums to hold them again (as happened with Denmark and Ireland) until their people vote the “right” way.

This is how the EU works. To dispute it is to engage in denial.

It is why for all their cynicism, the EU officials to whom TASS spoke are right: the sanctions against Russia will be extended before they expire on 31st January 2016 whatever objections some of the EU’s smaller countries may have against them.