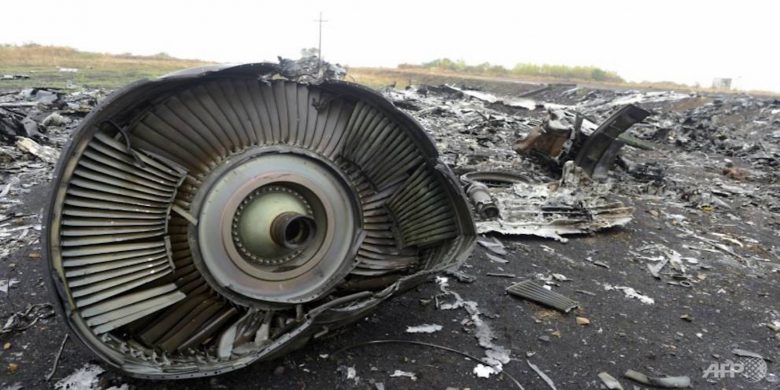 Part of the Malaysia Airlines Flight MH17 at the crash site in the Ukrainian village of Hrabove (Grabovo), some 80km east of Donetsk, seen in a file photo taken on Sep 9, 2014. (AFP/Alexander KHUDOTEPLY)

Anthony Loke, the Malaysian Transport Minister, has made a statement confirming there is no conclusive evidence that Russia was responsible for the MH17 crash. For a detailed analysis read Flight MH17, Ukraine and the new Cold War: Prism of disaster, by Kees van der Pijl.

There is no conclusive evidence to confirm that Russia was responsible for the downing of Malaysia Airlines flight MH17, Malaysian transport minister Anthony Loke said on Wednesday (May 30).

Investigators probing the 2014 downing of flight MH17 said last Thursday for the first time that the missile which brought down the plane over eastern Ukraine originated from a Russian military brigade. All 298 people onboard died.

Speaking to Channel NewsAsia on Wednesday, Mr Loke said: “There is no conclusive evidence to point at Russia under the JIT (Joint Investigative Team) evidence.”

Moscow has rejected JIT’s accusation, saying no such weapon had ever crossed the Russian-Ukrainian border and that it was an attempt to “discredit Russia in the eyes of the international community”.

“But who’s responsible – you can’t just pinpoint at Russia,” said Mr Loke, when asked about the findings.

“Of course we have to take into consideration diplomatic relations,” he said, adding that “any further actions will be based on conclusive evidence”.

Australia and the Netherlands, whose citizens were also onboard the plane, have informed Russia that they hold the country responsible under international law for its role in bringing down MH17.

On Tuesday, Russia rejected calls from the Dutch to accept responsibility at a UN Security Council meeting in Ukraine.

Final MH370 Report out in July

Meanwhile, Mr Loke also told Channel NewsAsia that the final report on MH370, the Malaysian Airlines Boeing 777 that disappeared in March 2014 with 239 people onboard, will be released in July.

What we are deciding right now is the final report of the investigation team, (which) will be released in July. This is what I’ve committed – we will give full disclosure without any hiding or editing of the contents,” he said.

Mr Loke also reiterated that the government will consider another search if new evidence resurfaces.

If there’s any credible lead or evidence, of course I’ll bring it back to the Cabinet to reopen the search but as of now, the team has briefed me that they’ve done everything possible,” he said.

“If there are any offers (like that from Ocean Infinity), they can come to us and we can make a decision later.”