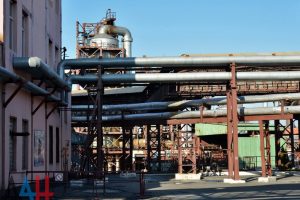 “Receivership is standard world practice, for example in cases of bankruptcy, when the government applies this procedure in order to preserve workers’ rights,” Kharlashka said. “In our case, it was prompted by Ukraine’s full blockade of the Donetsk Republic.”

Among the companies coming into Donetsk People’s Republic legal fold are such giants as Yasinovataya and Makeyevka coke plants and an affiliate of Enakievo steel mill. On Thursday, DPR receivership officials discussed current issues with workers of the largest companies in Makeyevka and Enakievo.

Some 60 personnel gathered in Makeyevka and 30 in Enakievo. DPR officials addressed the reasons behind the receivership and the reorientation to destinations in Russia. Makeyevka Coke Plant human resources department director Alexander Morozov supported DPR authorities’ actions. “We remember our plant being on the brink of stopping, but thank God, we avoided that fate,” Morozov said adding that all personnel continued working and that coke production was ongoing.

“Thanks to receivership, we’ll have raw materials and a sales market,” he added.

On February 27, the heads of the Donetsk and Lugansk people’s republics, Alexander Zakharchenko and Igor Plotnitskiy, respectively, demanded that Kyiv lift its economic blockade by March 1. The demand was not met, and the republics introduced receivership at 43 companies that had been operating under Ukrainian jurisdiction [report below].

A new turn of the economic blockade of Donbass by Ukraine occurred in January 2017. Paramilitaries in the punitive operations against the two rebel republics blocked railway traffic on the Kyiv-controlled, Gorskoye-Zolotoye railway stretch in Lugansk. They said the objective was to halt trade with the Lugansk republic. The blockade then extended to Svetlanovo station in the vicinity of Pervomaisk, Donetsk republic, along the railway stretch in Kyiv-controlled Artyomovsk area, and along the Yasinovataya-Skotovataya stretch.

Hardline Ukrainian lawmakers supported the trade blockade which the radicals said would be indefinite.