George Monbiot is not only a hypocrite, but a bully too, by Jonathan Cook, published on his website blog, Jan 12, 2018

Related:
* Love of Trump endures despite it all, by Margaret Kimberley, editor and senior columnist at Black Agenda Report, Jan 10, 2018
* What Canada and America owe Haiti, by Andray Domise, MacLean’s Magazine (Canada monthly), Nov 24, 2017  The United States and Canada have a brutal, ruinous record in Haiti. This should inform the treatment of asylum seekers today.

The same Democrats who denounce Donald Trump as a lawless, treasonous authoritarian just voted to give him vast, warrantless spying powers, by Glenn Greenwald, The Intercept, Jan 12, 2018

Canada and its Korean War allies [!] will sit down in Vancouver next week to mull ways to tighten the screws on North Korea – including whether to intercept North Korean shipping.

U.S. State Department officials confirmed that China and Russia were not invited to Tuesday’s meeting… Instead, only those countries that deployed troops as part of the United Nations during the Korean War between 1950 and 1953 have been invited to participate in the discussions…

Related: Cheap dignity of the Ukrainian revolution, news analysis by Oriental Review, Nov 23, 2017   The interviews with three snipers of Georgian nationality, conducted by an Italian journalist Gian Micalessin and aired last week [November 2017] as a breathtaking documentary on Milan-based Canale 5 (Matrix program), still have not paved their way to the international mainstream media. That is hardly surprising taking into account the bombshell evidence against the real perpetrators and organizers of the 2014 coup d’etat in Kiev, generally known as the ‘revolution of dignity‘…

How January 11 in Washington started with a bipartisan immigration deal and ended with a ‘shithole’, VOX News, Jan 11, 2018

[The United States introduced new sanctions against Iran in October 2017 to punish it for its missile defense program (news report Oct 27, 2017) and for foreign policies which the U.S. doesn’t like (news report Oct 13, 2017). Iran says these sanctions are a violation of the 2015 ‘nuclear’ agreement (Joint Comprehensive Plan of Action–Wikipedia) in which Iran opened its nuclear power program to international inspectors in exchange for the lifting of Western sanctions. Also in October 2017, Donald Trump ‘decertified’ the U.S. signature to the JCPOA, but its participation in the agreement remains in place.] 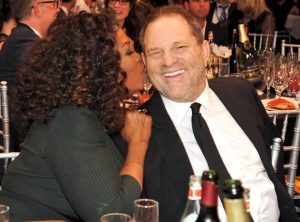 Oprah for president in 2020: Time to rename the White House the Celebrity House, commentary by John Wight on the ‘Op-Edge’ feature of RT.com, Jan 10, 2018

‘I’m sorry, but a group of obscenely rich people agreeing to dress in black (designer black, that is) at a Hollywood awards ceremony in protest at a culture of sexual abuse and exploitation cannot be taken seriously within an industry that is the very embodiment of abuse and exploitation.’

China says not all the main parties of the conflict in Korea will be in Vancouver and so it won’t attend, RT.com, Jan 10, 2018

[A gang-up against the Democratic People’s Republic of Korea (North Korea) will take place in Vancouver, Canada on January 16, 2018 in the form of a conference hosted by Canada’s foreign minister and the U.S. secretary of state. North Korea is not invited, nor is Russia. China and Russia are the only two countries to share a land border with the DPRK. The two countries hosting the Vancouver conference were among those which waged a genocidal war against the Korean people from 1950 to 1953. Invitations to the conference are specifically directed at other countries that took part in waging that war. Reuters news agency reports, “Canada and the United States are co-hosting the meeting in Vancouver on Jan. 16 to demonstrate international solidarity against North Korea’s nuclear and missile tests.”]

The recent drone attack on Russian bases in Syria was launched from an area near Idlib, which is controlled by Turkish-backed rebel forces, the Russian military said. Moscow reportedly complained to Ankara about the attack.

The assault last Saturday [Jan 6] involved 13 primitive unmanned aircraft and was thwarted by the defenses of the two bases, an airfield near Latakia and a port site in Tartus. The Russian military said the drones had been launched from the village of Muazzara, in the south-western part of the Idlib governorate, which was designated a “de-escalation zone” under an arrangement negotiated by Russia, Turkey and Iran…

… The new Nuclear Posture Review (NPR) is expected to be revealed sometime after President Donald Trump’s state-of-the-union address in late January and will be the first update of the key strategy document in eight years.

… One of the key changes to the U.S. policy would be an expansion of circumstances in which a nuclear attack would be considered. Under the new NPR, a conventional attack that causes mass casualties or targets critical infrastructure may trigger a nuclear retaliation from the U.S. … 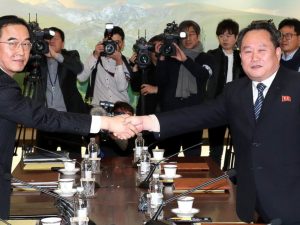 In jab at rivals, Iranian president Rouhani says Iran protests about more than economy, by Bozorgmehr Sharafedin, Reuters, Jan 8, 2018  [This article is a rare glimpse by Western media into the nuance and complexity of politics in Iran.] 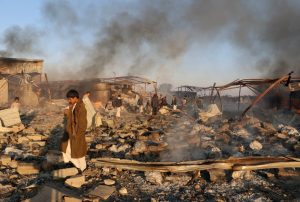 Related: Yemen’s Houthi rebels shoot down Saudi jet over Saada province, Xinhua, Jan 7, 2018   … More than 10,000 people have been killed in the conflict in Yemen since the Saudi-led coalition’s intervention in the impoverished country. More than 2,000 people have also died of cholera this year. The UN human rights office said it had tallied 136 civilians killed and another 87 wounded in strikes on Sanaa, Saada, Hodeida, Marib and Taiz governorates between December 6 and 16, 2017.

Battle looms for rebel-held Syrian province after IS defeat, by Bassem Mroue, Associated Press, Jan 7, 2018  Syrian government forces and allied militiamen are advancing on the largest remaining rebel-held territory in the country’s north, forcing thousands of civilians to flee toward the border with Turkey in freezing winter temperatures…

Related: Syrian trooops capture 14 villages from rebels, Associated Press, Jan 8, 2018  … In the northwestern city of Idlib, meanwhile, paramedics said the death toll from a massive car bombing the previous evening has risen to at least 25. Nearly 100 people were wounded.

Selahattin Demirtas will not seek re-election as co-leader of People’s Democratic party (HDP) in Turkey, by Amberin Zaman, Al-Monitor, Jan 8, 2018

… In addition to Demirtas, 10 other elected deputies of the HDP remain in jail, including the party’s former co-chair Figen Yuksekdag, all on charges of supporting “terrorism.” Today, a court in Diyarbakir sentenced HDP lawmaker Idris Bayulken to 16 years and eight months in prison for “membership of a terrorist organization” and engaging in “terrorist propaganda.”…

A tale of two Americas: Where the rich get richer and the poor go to jail, weekly commentary by John W. Whitehead, founder and president of the Rutherford Institute, Jan 3, 2018