Ideologue in Canada’s Globe and Mail daily presents four scenarios for war with North Korea, says ‘best possible’ outcome is to ‘eliminate’ the political leadership of the country before the bombs and missiles fly, by David Welch, special to the Globe and Mail, Jan 6, 2018  (David Welch is Centre for International Governance Innovation (CIGI) Chair of Global Security at the Balsillie School of International Affairs (University of Waterloo, Ontario) and CIGI Senior Fellow.)

… The best possible endgame would see someone high up in the North Korean leadership decide that their own long-term interest, and that of their family and compatriots, would be best served by taking matters into their own hands, eliminating Mr. Kim and his enablers, and signalling a willingness to co-operate with the international community…

Pouring it on in Canada:
* Kim Jong-un is a gangster: Here’s how to sort him out, by Robert Huish, professor of ‘international development studies’, Dalhousie U, Halifax, Nova Scotia, published on The Conversation, Jan 7, 2018
* Kim Jong Un is in the nuclear drivers’ seat, op-ed commentary by Simon Palamar, Toronto Star, Jan 8, 2018  [This CIGI ideologue claims the United States has been seeking a “denuclearization” policy on the Korean peninsula but has been frustrated by an intolerant government in North Korea. Donald Trump’s genocidal threats to reduce North Korea to nuclear ashes? ‘Don’t know of that.’ Decades-long economic sanctions by the U.S. against North Korea? ‘I’ll have to check into that.’ U.S. refusal to sign the 1953 armistice agreement ending the 1950-53 Korean War? ‘Never heard of it.’

Trump rejects author’s accusations that he is not mentally fit for office, calls himself a ‘stable genius’, report on Bloomberg News, Jan 5, 2018

Bridge connecting Russia-Crimea is on target for final completion in late 2018, three-minute video news report on Vesti News, with English sub-titles, Dec 20, 2017  [The dual railway-road bridge is 19 km long and passes over the Kerch Strait which connects the Black Sea and Sea of Azov.]

Four years of Ukraine and the myths of Maidan, interview with Stephen Cohen, broadcast on The John Batchelor Show, late December 2017.  Print summary and audio of the interview are posted on The Nation, Jan 3, 2018.

[The interview with Stephen Cohen provides a valuable overview of the events in Ukraine since late 2013. One item curiously missing from the print summary is any description of the civil war which the new, right-wing government in Kyiv launched in eastern Ukraine (Donbass region) in April 2014. A related curiousity is Stephen Cohen’s brief reference to that civil war as a “war which broke out against the Kyiv government”. Cohen also terms the March 2014 referendum vote in Crimea to secede from Ukraine and join the Russian Federation an “annexation” by Russia.]

Will Canada finally deal with its torture-in-Afghanistan skeletons?, op-ed commentary by Erna Paris, in The Globe and Mail, Jan 5, 2018

… Canada’s unexamined role in transferring captured Afghans to notorious prisons where they were certain to be tortured is another stubborn entity that keeps popping out of the cupboard. Both former prime minister Stephen Harper and current PM Justin Trudeau have tried to ignore the unwelcome visitor, but it will not be snubbed… 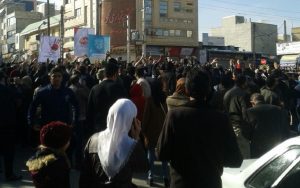 These are the real causes of the Iran protests, by Trita Parsi, published in The Nation, Jan 4, 2018

Trump’s vow to support Iran opposition carries ‘no credibility’ as demonstrations enter sixth day, interview on Democracy Now! with Trita Parsi and Reza Sayah, Jan 3, 2018  (Trita Parsi is a founder and the president of the National Iranian American Council and is the author of Losing an Enemy: Obama, Iran, and the Legacy of Diplomacy; Reza Sayah is a freelance journalist based in Tehran, Iran.)

Glenn Greenwald on Iran protests: Trump tweets ‘Ttme for change’ while backing dictators worldwide, interview with Glen Greenwald, editor of The Intercept, on Democracy Now! Jan 2, 2018  (One hour interview discussing U.S. foreign policy. The first 25 minutes of the interview discusses Iran. The interview then turns to ‘Russiagate’. Glenn Greenwald states that it is “obviously possible” that the Russian government was behind the 2016 hacking of the emails of members of the Democratic National Committee; he then goes on to state there is “no evidence” of collusion between the Trump election campaign and the Russian government. He says responsiblity for the deterioration of U.S.-Russia relations is shared by the governments of both countries.)

Trump and Netanyahu are trying to take credit, but this movement is all about the people

Related: So Trump didn’t want to be president but colluded with the Russians to do it?, by Monica Showalter, The American Thinker, Jan 4, 2018

In his stemwinder piece on the early chaotic days of the Trump administration, Michael Wolff would have us believe that Donald Trump really didn’t want to be president…

… The tweet was just one of many inflammatory statements by Trump over a long day of bizarre tweeting that included everything from fanning the flames of the Israeli-Palestinian conflict to attempting to take credit for airplanes being safe, calling for the prosecution of a top aide to Hillary Clinton, attacking the new publisher of the New York Times, and plugging Lou Dobbs’s show on the Fox Business Network. Along the way, he also reiterated a New Year’s Day dig at Pakistan.

It’s a puzzling array of topics that at first glance appears to defy any explanation as a communications strategy or a set of policy priorities. But the source turns out to be clear: It’s all Fox News…

The 12 victories of Venezuelan President Maduro in 2017, by Ignacio Ramonet, published on TeleSur, Jan 3, 2018

Statement from the Iranian Canadian Congress regarding protests in Iran, issued on Jan 2, 2018

… In the days since the protests began, some politicians and political groups in Canada and abroad who have for years advocated for sanctions and aggression against Iran have tried to exploit these protests to justify their anti-Iranian policies…These efforts constitute nothing but an attempt to cynically exploit people’s legitimate demands to advance these groups’ own political agenda..

My life as a New York Times reporter in the shadow of the war on terror, by James Risen, The Intercept, Jan 3, 2017  (lengthy essay)

… My case [in court in January 2015] was part of a broader crackdown on reporters and whistleblowers that had begun during the presidency of George W. Bush and continued far more aggressively under the Obama administration…

Seeing the unseen in Ukraine: Why is America sending arms?, by Patrick Lawrence, Salon.com, Dec 31, 2017   Unnoticed by the West, ceasefire talks continue, even as the Pentagon ships weapons to a corrupt Ukrainian regime

It is difficult to see into the running Ukraine crisis, just as it is in the Syrian case. This has long been so and is entirely by design — an impressive collaboration between the policy cliques in Washington and their clerks in the press. Some events are reported, but only some, for omission is an essential device in these extraordinarily pervasive mis- and disinformation campaigns. Rarely, possibly never, are events presented so as to convey cause and effect or responsibility. All is disparate, all things occur in isolation, some occurrences never occurred, and there is no past. Informed understanding is rendered difficult on the way to impossible…

As the dossier scandal looms, the New York Times struggles to save its collusion tale, by Andrew C. McCarthy, The National Interest, Jan 1, 2018

Facebook says it is deleting accounts at the direction of the U.S. and Israeli governments, by Glenn Greenwald, The Intercept, Dec 30, 2017 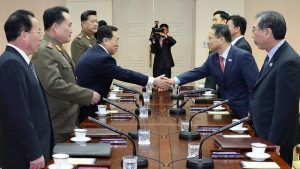 In 2014, high-level talks took place between officials of north and south Korea

South Korea offers talks with North on Olympic cooperation, Associated Press, Jan 2, 2018
Related: As Olympics near, South Korea agonizes over post-Games costs, Associated Press, Dec 14, 2017
… The Olympics, which begin February 9, will cost South Korea about 14 trillion won ($12.9 billion), much more than the 8 to 9 trillion won ($7 to 8 billion) the country projected as the overall cost when Pyeongchang won the bid in 2011.

Russians to cast ballots in presidential election on March 18, TASS Russian news agency, Jan 1, 2018  [Western news media present Russia’s presidential election as a foregone conclusion in favour of Vladimir Putin. It’s an effort to trivialize Russia’s electoral process and to deflect the attention of media consumers away from the widespread support for President Putin among Russians and the West’s own, failed democracies.]

One year of immigration under Trump, by Maryam Saleh, The Intercept, Dec 31, 2017

Apocalypse now: 2017 was another terrible, horrible, no good, very bad year, by John W. Whitehead, Rutherford Institute (Charlottesville, Virginia), Dec 27, 2017
Related: Officer involved 2017, by Josh Begley, The Intercept, Dec 30, 2017  ‘For the third year in a row, police officers in the United States have killed more than 1,000 people… This week, the research collective Mapping Police Violence, led by Sam Sinyangwe, released the 2017 Police Violence Report — an analysis of data concerning every one of the more than 1,100 deadly run-ins with law enforcement recorded this year…’