Newly published: Ukraine In The Crossfire 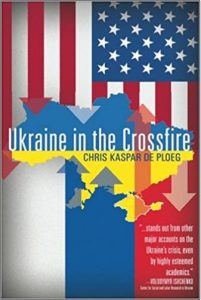 Synopsis:
Ukraine is embroiled in a bloody civil war. Both sides stand accused of collaborating with fascists, of committing war crimes, of serving foreign interests. This proxy-war between Russia and the West was accompanied by a fierce information war. This book separates fact from fiction with extensive and reliable documentation. While remaining critical of Russia and the Donbass rebellion, De Ploeg demonstrates that many of the recent disasters can be traced to Ukrainian ultranationalists, pro-western political elites and their European and North-American backers.

Ukraine in the Crossfire tackles the importance of ultranationalist violence during and after the EuroMaidan movement, and documents how many of these groups are heirs to former nazi-collaborators. It shows how the Ukrainian state has seized on the ultranationalist war-rhetoric to serve its own agenda, clamping down on civil liberties on a scale unprecedented since Ukrainian independence. De Ploeg argues that Kiev itself has been the biggest obstacle to peace in Donbass, with multiple leaks suggesting that U.S. officials are pushing for a pro-war line in Ukraine. With the nation´s eyes turned towards Russia, the EU and IMF have successfully pressured Ukraine into adopting far-reaching austerity programs, while oligarchic looting of state assets and massive tax-avoidance facilitated by western states continue unabated.

De Ploeg documents the local roots of the Donbass rebellion, the overwhelming popularity of Crimea’s secession, and shows that support for Ukraine’s pro-western turn remains far from unanimous, with large swathes of Ukraine’s Russophone population opting out of the political process.  Nevertheless, De Ploeg argues, the pro-Western and pro-Russian camps are often similar: neoliberal, authoritarian, nationalist and heavily dependent on foreign support.

In a wider exploration of Russo-Western relations, he examines similarities between the contemporary Russian state and its NATO counterparts, showing how the two power blocs have collaborated in some of their worst violent excesses. A far cry from civilizational or ideological clashes, De Ploeg argues that the current tensions flow from NATO´s military dominance and aggressive posture, both globally and within eastern Europe, where Russia seeks to preserve the status-quo.

Packed with shocking facts, deftly moving from the local to the international, from the historical to the recent; De Ploeg connects the dots, consistently offering the necessary context for understanding the multiple faces of imperialism within Ukraine and beyond. Written in an accessible language, Ukraine in the Crossfire offers a truly comprehensive and independent narrative on the Ukrainian conflict.

“The Dutch journalist-scholar presents a thorough but sharply critical account of the role of the West in the now three- year Ukrainian civil war, the political epicenter of the new Cold War.” – Stephen Cohen, Professor Emeritus of Russian Studies, New York University/Princeton University, in The Boston Globe

”Chris de Ploeg’s book stands out from other major accounts on the Ukraine’s crisis, even by highly esteemed academics, in its careful work with the facts, which is a very important feature amidst the conscious propaganda and information war from all the sides of the conflict. It is also the best left-wing analysis so far. Being critical to a problematic Maidan uprising and the neoliberal-nationalist government it helped to bring to power, the author does not take equally wrong Putin- versteher position and shows how the rivalry of competing imperialisms and nationalisms brought Ukraine into the current political and economic disaster.” – Volodymyr Ishchenko, Deputy director of the Center for Social and Labor Research in Ukraine and lecturer at the Department of Sociology in Kyiv Polytechnic Institute

“A meticulously documented interpretation of the Second Maidan that focuses on the darker side of Ukraine’s Revolution of Dignity. By weaving together the role of the Far Right and western governments, the emergence of resistance in Donbass, and the reasons why Kiev responded to it with military force, De Ploeg provides the sort of compelling narrative that is typically missing in the media. An impressive achievement.” – Nicolai N. Petro, professor of political science at the University of Rhode Island (USA), formerly U.S. Fulbright Research Scholar in Ukraine

”A highly informative and forcefully argued analysis of the contradictions of the Ukrainian revolution and Western reactions. The informational war over the Ukraine crisis demonstrates not just the limits to our understanding of these complex events but above all the tensions generated by the failure to establish an inclusive peace after the Cold War. Chris Kaspar de Ploeg brilliantly dissects the resulting dilemmas, and provides a convincing analysis of where we went wrong.” – Richard Sakwa, Professor of Russian and European politics at the University of Kent. Author of Frontline Ukraine: Crisis in the Borderlands.

“This book is the best analysis in the Dutch language to date of the complexity, the conflicting interests, the cynical power games that the EU, the US and Russia play there, and the one-sided reporting on this in the European and American media.” – Lode Vanoost, ‘De Wereld Morgen’

“Every now and again readers with a particular interest in international politics find a gem served on a silver platter, which you would hope gains a readership that extends to the inner circles of political decision making. Especially when that book is written by a Dutchman and follows an informed, rational, left principled line that is rarely if ever observed in the mainstream media. Ukraine in the crossfire … is such a book, one that you also finish rapidly and with delight. … [De Ploeg] follows the American dissident Noam Chomsky and his method of promoting peace, security and democracy by creating a discourse in which the facts speak for themselves but argue against the powers-that-be. … The force of the book by Chris de Ploeg lies in the clear, logical structure, whereby the reader gains layer for layer insights into the meaning of the conflict in Ukraine on every political level.” – Hector Reban, Ravage Webzine

Prologue
A Divided Country
The Return of the Wolfsangel
The Militarization of Maidan
Far Right-backed Regime Change
Oligarch-backed Regime Change
Western-backed Regime Change
Imposing Austerity
Condoning Corruption
Dismantling Russophone Ukraine
The East Responds
Civil War Darkens the Landscape of Ukraine
The Ravages of War
Dehumanizing the Donbass, Embracing the Far Right
Beyond Populism: Assessing the Influence of the Far Right
Repression and Diversion in Divided Ukraine
Obstructing Peace
The Imperial Desire for War
Western Military Doctrine and the Normalization of War Crimes
Seeing Beyond the Imperial Divide
Divisions on the Western Front?
Cold War Politics in the Age of Trump
Index