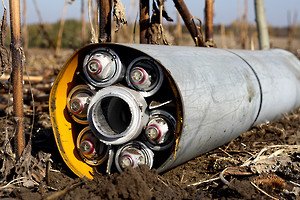 Cluster munition in an unexploded Uragan rocket in a field in territory controlled by the Ukrainian government near Novomykhailivka on October 14, 2014; photo by Ole Solvang, Human Rights Watch

The New York Times and Human Rights Watch are each reporting findings that Ukraine has used cluster bombs against the civilian population in the east of the country during its recent war. The Times’ findings are contained in a story by Andrew Roth published on October 20. On the same day, Human Rights Watch issued a damning, nine-page report on its investigations. Below is an excerpt from the Times article.

“During a week-long investigation in eastern Ukraine, Human Rights Watch documented widespread use of cluster munitions in fighting between government forces and pro-Russian rebels in more than a dozen urban and rural locations. While it was not possible to conclusively determine responsibility for many of the attacks, the evidence points to Ukrainian government forces’ responsibility for several cluster munition attacks on Donetsk. An employee of the International Committee of the Red Cross (ICRC) was killed on October 2 in an attack on Donetsk that included use of cluster munition rockets.”

“It is shocking to see a weapon that most countries have banned used so extensively in eastern Ukraine,” said Mark Hiznay, senior arms researcher at Human Rights Watch… [End citation]

Canada’s public broadcaster, the CBC, has declined to report this story on its news website. The Times article was posted to the Globe and Mail online on October 21. The same day, the Toronto Star published a wire service video report online, which gave prominence to Ukraine government denials. Both newspapers published their first print stories on October 22. These consisted of wireservice reports by Reuters (in the Globe and Mail) and LA Times (in the Toronto Star), each of which feature denials by Ukraine government officials that its armed forces use cluster bombs.

The same Reuters report as in the Globe and Mail appeared in The Guardian online on October 21 and in print on October 22.

See further below for background.

DONETSK, Ukraine — The Ukrainian Army appears to have fired cluster munitions on several occasions into the heart of Donetsk, unleashing a weapon banned in much of the world into a rebel-held city with a peacetime population of more than one million, according to evidence and interviews with witnesses and victims.

Sites where rockets fell in the city on Oct. 2 and Oct. 5 showed clear signs that cluster munitions had been fired from the direction of army-held territory, where misfired artillery rockets still containing cluster bomblets were found by villagers in farm fields.

The two attacks wounded at least six people and killed a Swiss employee of the International Red Cross based in Donetsk.

If confirmed, the use of cluster bombs by the pro-Western government could complicate efforts to reunite the country, as residents of the east have grown increasingly bitter over the Ukrainian Army’s tactics to oust pro-Russian rebels.

Further, in a report released late Monday, Human Rights Watch says the rebels have most likely used cluster weapons in the conflict as well, a detail that The New York Times could not independently verify…

Watch here on You Tube a four minute video by Human Rights Watch.

Convention on Cluster Munitions, from Wikipedia:
The Convention on Cluster Munitions (CCM) is an international treaty that prohibits the use, transfer and stockpile of cluster bombs, a type of explosive weapon which scatters submunitions (“bomblets”) over an area. The convention was adopted on 30 May 2008 in Dublin and was opened for signature on 3 December 2008 in Oslo. It entered into force on 1 August 2010, six months after it was ratified by 30 states. As of October 2014, 108 states have signed the treaty and 87 have ratified it or acceded to it.*

Countries that ratify the convention will be obliged “never under any circumstances to”:
(a) Use cluster munitions;
(b) Develop, produce, otherwise acquire, stockpile, retain or transfer to anyone, directly or indirectly, cluster munitions;
(c) Assist, encourage or induce anyone to engage in any activity prohibited to a State Party under this Convention…

* [Among those countries that have NOT signed or ratified the 2008 Convention on Cluster Munitions are the United States, Canada, Russia and Ukraine.]

From the ‘Defense Watch’ blog of David Pugliese, Ottawa Citizen, October 22, 2014:
… Canada signed the Convention on Cluster Munitions in 2008, but has yet to ratify the treaty because of a contentious clause in its bill that would still allow Canadian Forces personnel to be indirectly involved in the use of the weapons.

The government argues the bill, in its current form, is needed to preserve the military’s ability to participate in joint operations with the United States, which opposes the treaty, and still reserves the right to use the weapons…