“Seventeen intelligence agencies” — if you’ve been following the maniacal #TrumpRussia coverage to any extent, you’ve heard this phrase used uncritically, time and again, regardless of your ideological loyalties. Pundits, papers and rank-and-file establishment loyalists have been unquestioningly regurgitating the nonsensical line that 17 intelligence agencies confirmed Russian interference in the U.S. elections ever since Hillary Clinton made that baseless assertion in a debate back in October 2016. 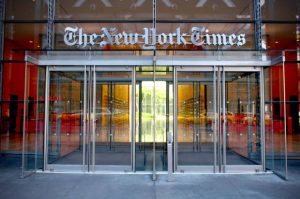 The innate absurdity of the claim was immediately attacked by WikiLeaks and anti-establishment outlets who pointed out that this would necessarily need to involve full investigations from agencies like the Coast Guard, the DEA and the Energy Department in order to be true. Nevertheless, many high-profile pro-establishment outlets like Politifact and USA Today found Clinton’s claims to be 100 per cent true on the grounds that James Clapper, then-Director of National Intelligence and notorious Russophobic racist, “speaks on behalf of” all 17 intelligence agencies. To this day Politifact stands by its false claim on the basis of that same spurious assertion.

It turns out, however, that in addition to Clapper’s office there were only three intelligence agencies involved in that assessment, not 17, and that the conclusions were drawn not by the actual agencies in full, but by a mere two dozen loyalists from those agencies hand-selected by Russophobic eugenicist Clapper himself. The great Robert Parry notes in his Consortium News article [weblink below] about this point, “as any intelligence expert will tell you, if you ‘hand-pick’ the analysts, you are really hand-picking the conclusion. For instance, if the analysts were known to be hard-liners on Russia or supporters of Hillary Clinton, they could be expected to deliver the one-sided report that they did.”

As reported by Parry, we have known about these facts since they emerged from Clapper’s racist face hole on May 8, and they were confirmed by former CIA Director John Brennan on May 23. And yet at a California technology conference on May 31, Hillary Clinton repeated the same lie she’s been spouting since October:

“Seventeen agencies, all in agreement, which I know from my experience as a Senator and Secretary of State is hard to get. They concluded with high confidence that the Russians ran an extensive information war campaign against my campaign, to influence voters in the election. They did it through paid advertising we think; they did it through false news sites; they did it through these thousand agents; they did it through machine learning, which you know, kept spewing out this stuff over and over again. The algorithms that they developed. So that was the conclusion.”

The “17 intelligence agencies” lie had been completely, thoroughly debunked for weeks, and yet not a soul called Clinton out on her brazen lie within the establishment press. Indeed, establishment pundits like Megyn Kelly continued to repeat the lie, and have continued to do so throughout the month of June.

All this changed when CNN was sent reeling by a 1–2–3-punch combination ensuing from its horrendously propagandistic Russia coverage, which has seen three of its journalists lose their jobs and sent the network into international disgrace. All of a sudden we are seeing establishment outlets getting a lot more conscientious about what they choose to publish about the Russian Federation, and today we saw none other than the New York Times posting the very first retraction [on June 29] of this long-debunked lie that we have seen in establishment media.

You just know how that went down, too; the retraction tells a complete story with a beginning, middle and end. The article’s author repeated the “17 intelligence agencies” lie without so much as a second thought, because it’s something they’ve been saying for months and getting away with — hey, it’s only Russia, right? They’re the Official Bad Guys so we can print whatever we want about them. The Washington Post has been getting away with telling brazen lie after brazen lie about Russia and suffering no consequences for it whatsoever, so we’ve got plenty of wiggle room here. The article passed by the editors for the same reason, but then someone up top received a complaint about the false claim in the article and immediately pulled the author into his office, yelling, “You fool! What’s the matter with you? Are you trying to get us CNNed???”

As I never get tired of reminding the brainwashed consumers of mainstream media, Russiagate is bullshit, and we fucking told you so. The entire thing was sparked off by two dozen agents hand-selected by a racist man with a racist agenda, and only persists because the U.S. deep state wants regime change in Moscow and Damascus. This moronic conspiracy theory has been permitted to march on for far too long, and in the meantime we’ve been goose stepped to the brink of World War 3 as a result of this administration’s idiotic behavior in Syria. That’s where a real resistance needs to happen; not a McResistance to imaginary threats fed to the masses by the lying corporate media, but a real resistance to a very real and tangible threat from actions by the Trump administration and the unelected power establishment with which he is unquestionably aligned in a nation that the United States has no business involving itself in whatsoever.

Thanks for reading! If you enjoyed this, please consider helping me out by sharing it around, liking me on Facebook, following me on Twitter, or even tossing me some money on Patreon so I can keep this gig up.