The New York Times, which once postured as the champion of a free press, now is seeking crackdowns on news that the public gets from the Internet under the guise of combatting “Russian propaganda”.

Once upon a time, the danger to a free press came from the right. But since Russia-gate, liberals have been busy playing catch-up. 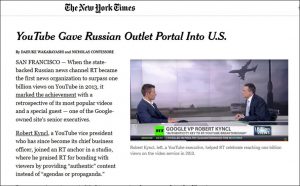 The latest example is a front-page article in Tuesday’s [October 24] New York Times. Entitled ‘YouTube gave Russian outlet portal into U.S.’, it offers the usual blah-blah-blah about Kremlin agents engaging in the political black arts. But it goes a step farther by attempting to discredit a perfectly legitimate news organization.

Reporters Daisuke Wakabayashi and Nicholas Confessore begin by noting that RT, the Moscow-funded TV channel formerly known as ‘Russia Today’, is now an Internet powerhouse and then observes that when it became the first YouTube news channel to surpass one million views, YouTube Vice President Robert Kyncl “joined an RT anchor in a studio, where he praised RT for … providing ‘authentic’ content instead of ‘agendas or propaganda’.”

Cue the ominous background music. “But now,” the article continues, “as investigators in Washington examine the scope and reach of Russian interference in United States policy, the once-cozy relationship between RT and YouTube is drawing closer scrutiny.”

Why? Because RT took advantage of its “prominent presence on YouTube’s search results” to pepper viewers with negative videos about Hillary Clinton. According to Wakabayashi and Confessore:

“As the presidential election heated up in the spring of 2016, RT consistently featured negative stories about Mrs. Clinton, according to United States intelligence officials. That included claims of corruption at her family foundation and ties to Islamic extremism, frequent coverage of emails stolen by Russian operatives from Mrs. Clinton’s campaign chairman, and accusations that she was in poor physical and mental health.”

Then comes the kicker: “Much like the Russian-controlled pages on Facebook, RT’s YouTube videos comply with YouTube’s community guidelines, which cover things like nudity, copyright violations and promoting violence against a group based on race or religion. But not propaganda.”

Bottom line: disinformation and propaganda are what RT is all about. But there’s a problem: the Times article is less than clear about what RT actually got wrong.

The web version, for example, links to an RT interview with WikiLeaks founder Julian Assange that ran shortly before the 2016 election. The topic is a September 2014 email obtained by Wikileaks in which Clinton acknowledges that “the governments of Qatar and Saudi Arabia … are providing clandestine financial and logistic support to ISIL and other radical Sunni groups in the region.”

“I think this is the most significant email in the whole collection,” Assange states as interviewer John Pilger murmurs in agreement. “As analysts know, and even the US government has mentioned … some Saudi figures have been supporting ISIS, funding ISIS. But the dodge has always been that it’s just some rogue princes using their cut of the oil to do what they like and – but actually – the government disapproves. But that email says no, it is the government of Saudi and the government of Qatar that have been funding the ISIS.”

The exchange resumes with Pilger saying: “And, of course, the consequence of that is that this notorious terrorist, jihadist group called ISIL or ISIS is created largely with money from the very people who are giving money to the Clinton Foundation.”

Is this dezinformatsiya, as the Russians call disinformation? The Times implies that is, yet in fact Assange’s statement is perfectly correct. The email’s authenticity is unchallenged while there is also no question that Arab Gulf interests have contributed massively to the Clinton Foundation.

As the foundation’s own records show, Saudi Arabia has given anywhere from $10 million to $25 million over the years, Qatar has contributed between $1 million and $5 million, while other Gulf governments, corporations, and individuals have kicked in anywhere from $13 million to $50 million more.

This is not fake news, but the plain truth. Moreover, it’s the scandalous truth because it shows Clinton taking money from people funding the same terror organizations she was professing to fight.

It’s as if Jesse Jackson had been found taking payoffs from South Africa’s white supremacist government during apartheid. If that had occurred, the Times would have been up in arms. Yet not only has it never said a word about the 2014 Clinton email, it is now going after RT for putting out news that it has sat on for months.

What’s going on here? Is the Times suggesting that truth is irrelevant and that the only thing that counts is where it originates? Is it arguing that what’s said matters less than who’s saying it – and that if it’s RT, WikiLeaks, or whomever, we must all stop up our ears so that the message will be blocked?

The article goes on to suggest that “RT’s embrace of YouTube shows how difficult it could be to limit foreign influence.” Calling for foreign influence to be rolled back for no other reason than the fact that it’s foreign is very dangerous. Indeed, it’s nothing more than a liberal echo of the isolationist, America-First politics practiced by Donald Trump except that where Trump wants to bar immigrants and imports, the Times wants to bar foreign information, no matter how pertinent or how truthful. Instead of reporting news, it is seeking to block it.

While the Times was chasing after RT, the Washington Post was going public with the truly sensational news that the Clinton campaign’s law firm had paid for the notorious Christopher Steele dossier, famous for charging that Trump had paid for a couple of prostitutes to urinate on a Moscow hotel bed once occupied by Barack and Michelle Obama.

After accusing the Trump campaign of collaborating with foreign agents to influence an American election, it turns out that the Democrats, or at least their lawyers, not only collaborated with, but hired a foreign agent – Steele formerly worked for MI6, Britain’s version of the CIA – to do the same (and Steele claimed to have gotten Russian officials to supply unsubstantiated allegations designed to hurt Trump’s campaign).

The result of all this has been nonsense piled on top of nonsense. More than a year after the Democratic National Committee’s massive email dump, there is still no evidence that the Kremlin was responsible or even that it was a hack at all. (Wikileaks, with its 100-per cent record for veracity, continues to maintain that the emails were leaked by an insider.)

Indeed, the sole basis for the charge is a report by CrowdStrike, a California-based cyber-security firm whose chief technical officer, Dmitri Alperovitch, is known both for his anti-Kremlin bias and his close ties to the Clinton camp.  (See Consortiumnews.com’s ‘The Scandal Hidden Behind Russia-gate‘.)

The FBI never inspected the DNC’s computer servers to see for itself if they were truly hacked while a major CrowdStrike foul-up – it subsequently accused pro-Russian separatists of using similar malware to target Ukrainian artillery units – has gone largely unreported even though the firm was forced to issue a retraction. Certainly, the Times has never breathed a word about the blunder.

What’s the goal here? One aim, of course, is to drive Trump out of office – not by opposing him from the left, however, but from the right on the basis of anti-Russian xenophobia. But another is what might be described as an exercise in induced mass conformity.

If, thanks to Russia-gate, the Times succeeds in scaring Americans into believing that the country is being hit with an epidemic of “fake news” even though no one knows what the term even means; if it can persuade readers that news is “disinformation” simply because it comes from a Russian outlet; if it can convince them that “Kremlin-aligned agents secretly built fake Facebook groups to foment political division” even though “Kremlin-aligned” can mean just about anything under the sun – if it can do all those things, then it can persuade them to turn their critical faculties off and believe whatever the U.S. intelligence agencies (and The New York Times) tell them to believe.

The integration of the corporate media and the so-called “intelligence community” will thus be complete. Instead of information, the result will be a steady stream of CIA propaganda aimed at dulling critical faculties and preparing the public for one imperial misadventure after another

The Times, to paraphrase Chico Marx, is essentially asking readers, “Who you gonna believe, the CIA or your own critical faculties?” The correct answer, it seems to think, is the former. Rather than a force for enlightenment, the “newspaper of record,” is turning into the opposite.

Daniel Lazare is a regular contributor at Consortium News. He is the author of ‘The Velvet Coup: The Constitution, the Supreme Court, and the Decline of American Democracy’ (Oct 2001); ‘America’s Undeclared War: What’s Killing Our Cities and How We Can Stop It’ (April 2001); and ‘The Frozen Republic: How the Constitution Is Paralyzing Democracy’ (June 1997). His articles on the history of right-wing nationalism in Ukraine can be found on the website of New Cold War.org, including: Who was Stepan Bandera? (Sept 2015) and Timothy Snyder’s Lies (June 2014). His articles compiled on New Cold War.org are here.


Thank you, Consortium News readers! Thanks to the generosity of our readers, we have reached our $35,000 target for our fall fund drive.

As Russia-gate gives cover for an Establishment attack on Internet freedom and independent news, traditional defenders of a free press and civil liberties are joining the assault or staying on the sidelines.