New turbulence on U.S. financial markets shows the limits of US growth under Trump

February 8, 2018
By John Ross, English version from Learning From China, 2 Feb 2018. This article was originally published in Chinese at Sina Finance Opinion Leaders.

On Friday 2 February, sharp turmoil, which had been building for some time, shook US financial markets.

In summary the US economy was showing clear signs of rising interest rates and rising inflation – producing the market turmoil.

It is important to understand that these trends are not separate. They show that although US economic growth is low by historical standards, with only a  2.5% year on year GDP increase in the year to the 4th quarter of 2017, it is showing signs of overheating:

In summary, despite low growth, the US is showing signs of capacity constraints.

By coincidence on the morning of the same day an article by me analysing the latest US economic data was published. This clearly predicted these trends – although it was of course written before the events on 2 February. This article is published without change below except for an updating of the US bond yields data to the end of 2 February. ​

The new release of US and EU GDP data for the whole of 2017 allows a factual examination of the latest state of the US economy and constitutes a baseline for assessing the future impact of the Trump tax cuts. This new data confirms the following fundamental features of US economic performance.

This situation of the US economy has significant implications for US-China relations. In particular, as the US is unable to speed up its medium/long term growth, those forces in the US seeking to engage in ‘zero-sum game’ competition with China can only achieve their goal of improving the position of the US relative to China by trying to slow China’s economy.

These implications will be considered in the conclusion of the article. However, first, using the approach of ‘seek truth from facts’ the latest data on the US economy will be examined.

US was again the most slowly growing major economic centre​

The new data shows that for the second year in succession the US was the world’s most slowly growing major economic centre – see Figure 1:

This data shows that the claim in sections of the Chinese media that in the last two years the US was undergoing ‘dynamic growth’ was entirely false, the opposite of the truth. Bluntly it was in the category of ‘fake news’.

Although the facts of US poor economic performance in 2017 and 2016 are therefore clear this clearly poses a question. To what degree will the US improve this performance? This in turn requires examining both the position of the US in the present business cycle and the medium/long term determinants of the US economic performance. 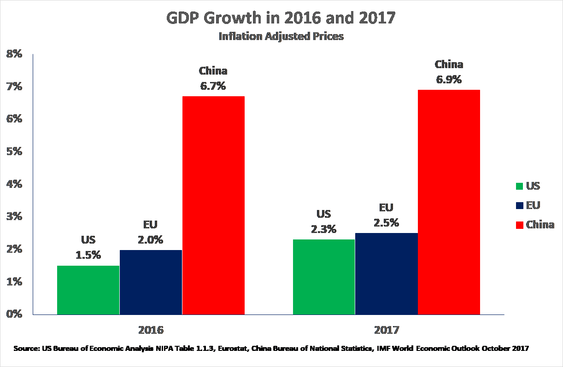 Position of the US business cycle

​This consistent US medium/long term growth rate also makes it relatively easy to assess the short-term position of the US in the current business cycle. The key features of the latest data, for US economic performance in the final quarter of 2017, are given in Figure 2. This shows that US year on year economic growth in the last quarter of 2017 was 2.5%. This represents an upturn from the very depressed US growth during 2016 – which reached a low point of 1.2% growth in the 2nd quarter of 2016.

To accurately analyse this data, it should be noted that confusion is sometimes created in the media by the fact that the US and China present their quarterly GDP data in different ways. China emphasises the comparison of a quarter with the same period in the previous year. The US highlights the growth from one quarter to the next and annualises this rate. But the US method has the disadvantage that because quarters have different economic characteristics (due to the different number of working days due to holidays, weather effects etc) this method relies on the seasonal adjustment being accurate. But it is well known that the US seasonal adjustment is not accurate – it habitually produces low growth figures for the first quarter and correspondingly high figures in other quarters. It is therefore strongly preferable to use China’s method which, because it compares the same quarters in successive years, does not require any seasonal adjustment and therefore gives true year on year growth figures. All data in this article is therefore for this actual year on year growth.

More precisely, given the prolonged (6 quarters) period centring on 2016 when US growth was below its long-term average, this also means that purely for normal business cycle reasons it would be anticipated that for most of 2018 US GDP growth would be above its long-term average of 2.2%. This may allow US growth to overtake that of the EU, but not of course to overtake China. But there is as yet no indication that the US economy will achieve sustained growth of more than three percent growth rate claimed by Trump’s Treasury Secretary Cohn who stated to CNBC in justifying the tax cut that: ‘We think we can pay for the entire tax cut through growth over the cycle… Our plan was based on a 3 percent GDP growth. We think we can now be substantially above 3 percent GDP growth.’

It should be noted that Cohn’s claim is that three percent growth can be achieved over a business cycle – which would indeed be a substantial increase in US medium/long term growth. It is not at all the same as the US achieving three percent growth in a particular quarter or quarters – which has occurred previously and is entirely compatible with the maintenance of the current US medium/long term growth rate of just above 2.2%.

There is, of course, even less evidence that the US economy will achieve 6% growth as claimed by President Trump in his December press conference with Japanese prime minister Abe.

In order to asses the realistic growth rate for the US it is now necessary to analyse the fundamental determinants of US medium/long-term growth. 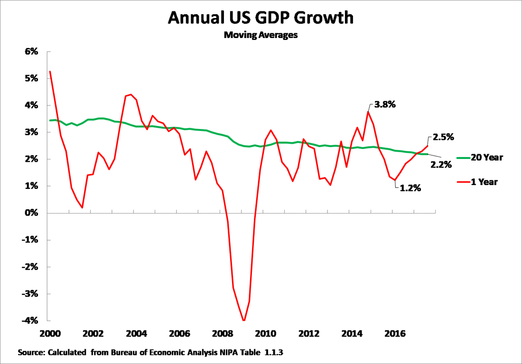 No basic acceleration in US long term growth

The most fundamental trend in US long term growth is the progressive slowing of the US economy which has been taking place for over 50 years. Figure 3 shows that, taking a 20-year moving average, to remove all short-term effects of business cycles, the US economy has progressively decelerated from 4.4% annual growth in 1969, to 4.1% in 1978, to 3.5% in 2002, to 2.2% in the 4th quarter of 2017. The fact that the US economy has been slowing for over 50 years shows that this process is determined by extremely powerful and long-term forces which will, therefore, be extremely difficult to reverse. The nature of these trends is analysed below – the latest US data, however, clearly shows no acceleration in long-term US growth which remains at 2.2% 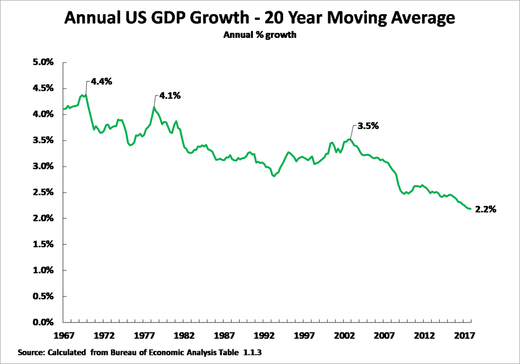 Turning from long-term to US medium-term growth, this necessarily shows greater fluctuations than US long term growth – as medium term growth rate is affected by business cycles. It is therefore useful, in analysing such cyclical fluctuations, to consider not only the average trend but also to make a comparison of successive peaks and troughs of business cycles. To illustrate these a five-year moving average for US growth is shown in Figure 4 and a three-year average is shown in Figure 5. 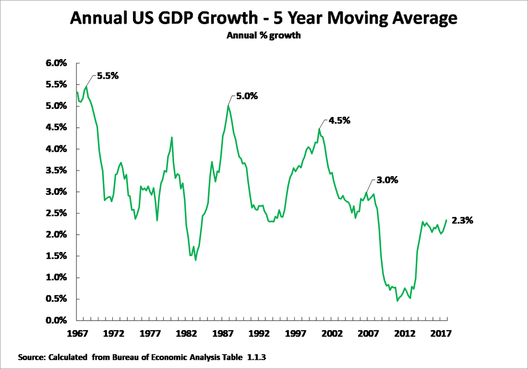 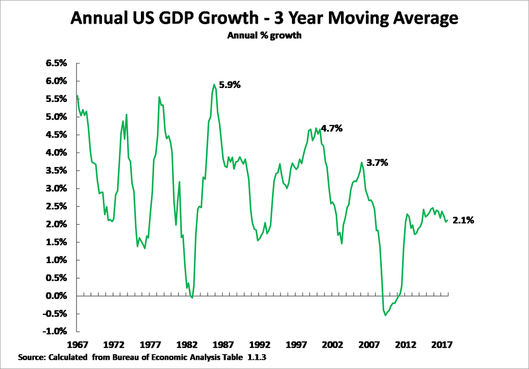 The chief factors in US medium/long term growth

Having shown the factual trends in US economic growth it is then necessary analyse what produces them. My article ‘Trump’s Tax Cut – Short Term Gain, Long Term Pain for the US Economy‘ analysed in detail that statistically the strongest factor determining US medium/long term growth is US net fixed investment (i.e. US gross fixed capital formation minus capital depreciation). Table 2 updates the data regarding this given in the earlier article to now include 2017.

As may be seen, over the short-term there is no strong correlation between US GDP growth and the percentage of net fixed investment in US GDP – the R squared correlation for 1 year is only 0.21. Indeed, as ‘Trump’s Tax Cut – Short Term Gain, Long Term Pain for the US Economy’ showed in detail, there is no structural factor in the US economy which is strongly correlated with US growth in the purely short term. That is, put in other terms, numerous factors (position of the economy in the business cycle, trade, situation of the global economy, weather etc) determine short term US growth. However, as medium and long-term periods are considered, the correlation of US GDP growth with the percentage of net fixed investment in US GDP becomes stronger and stronger. Already over a five-year period the level of net fixed investment in US GDP explains the majority of US GDP growth, and over an eight-year period the R squared  correlation is 0.71 – extremely strong. 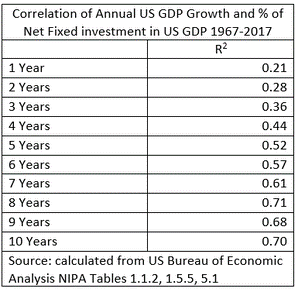 Turning to analysis of these factual trends, Figure 6 illustrates the percentage of net fixed investment in US GDP – showing the extremely sharp fall in this which has occurred. This fall corresponds to the long-term slowdown in US growth already analysed.

To be precise, taking peak levels in business cycles: 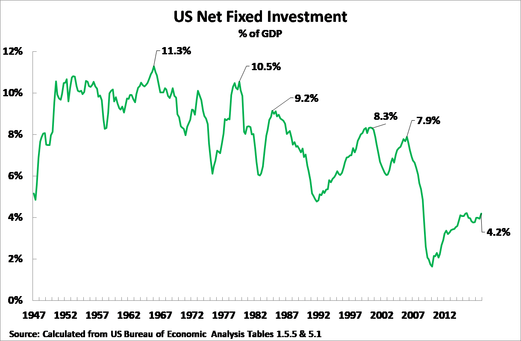 In summary, the conclusions which follow from the latest US GDP data are clear:

It is of course important to follow and check these trends factually given the importance of the US for the global economy and for China. Given the determinants of US economic performance over the medium/long term it follows that, in addition to factually registering US growth, it is necessary to regularly analyse the percentage of net fixed investment in US GDP in order to see if any new conditions for an acceleration of US medium-long term growth is occurring – so far it has not.

It should also be noted that the Trump tax cut, because it is not matched by government spending reductions, will sharply increase the US budget deficit and therefore, other things remaining equal, it will reduce US domestic savings, and therefore reduce the domestic US capacity to finance investment.

The following dynamic should therefore be anticipated in the US economy, which China’s policy needs to take into account: 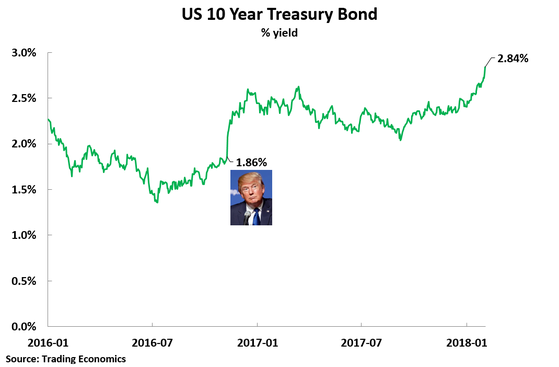 Finally, while the focus of this article is economic, it is clear certain geopolitical conclusions flow from these factual trends in the US economy.

The consequences of this is that given the tax cut will be seen, after the normal cyclical recovery in 2018, not to achieve its goal of boosting US growth this is likely to lead to US neo-cons/economic nationalists falsely accusing other countries of creating the problems which have prevented US medium/long term growth accelerating. This may lead to such forces increasing their pressure for protectionist measures in the US.