MOSCOW – New sanctions by the U.S. against Russia are indicative of a full failure of Washington’s policy towards Russia, Deputy Foreign Minister Sergey Ryabkov told TASS on Friday. 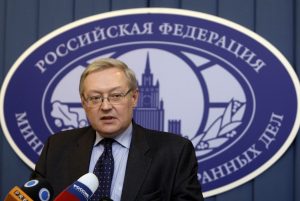 “We once again find ourselves in the situation when the U.S. administration demonstrates full and complete disregard of some obvious for many in the world circumstances, namely that nobody and never can and will yield to U.S. attempts to put sanctions pressure on other countries,” the diplomat said.

“We spoke earlier and I say it once again, that this American course is a failure from the beginning to the end. It testifies to feebleness of American political and diplomatic thinking and a complete failure of Washington’s policy in the Russian direction,” the diplomat said.

“The list of individuals and legal entities included in the new (U.S.) sanctions lists – I emphasize that these are new sanctions lists despite all claims by the U.S. administration that these are corrected or expanded old lists. It is idle talk, which does not change the core of the matter: these are the new lists and their contents are so eloquent that they speak for themselves,” the high-ranking diplomat said adding that the United States had even imposed sanctions on the Moscow swimming pool Chaika.

“All this would be funny if it were not so sad in fact. What is particularly sad is to realize the absolute inadequacy of the people who stand behind these decisions and who offered them to their leaders,” he said. Sanctions can only strengthen determination to ensure Kiev’s abidance by Donbass commitments

According to Ryabkov, new anti-Russian sanctions will only stiffen Moscow’s determination in seeking Kiev’s compliance with its commitments on Donbass. “These sanctions can only strengthen our determination to ensure a stable supply and other means between Crimea and the Krasnodar region,” the diplomat said, adding that they will “add resoluteness to our approach”.

He said he was referring to Moscow’s support for a course towards ensuring unconditionally the rights of Donbass residents, ensuring a special status of these areas, as well as a consistent and exacting policy towards Kiev “with an aim to achieve a full implementation of the Minsk agreements”.

“We will wish the U.S. administration to become a thing of the past together with their sanctions,” he said.

Ryabkov went on to say that the sanctions are unlikely to change the situation around Crimea or affect the construction of a bridge over the Kerch Strait.

Sanctions will not have macroeconomic impact

According to Russian Minister of Economic Development Alexei Ulyukayev, expansion of the United States sanctions list against Russian companies will not have macroeconomic impact on the Russian economy, but it will have some impact on individual companies.

“It is clear that there will be no macroeconomic impact. But for individual companies, of course, life will become a little more complicated,” he said in an interview with RBC on Friday.

Russian Deputy Prime Minister Arkady Dvorkovich said earlier that another round of U.S. sanctions against Russia will not have any serious effect on Russia’s economy and business. “Any sanctions impact the GDP of both those who introduce them and those against whom they are introduced. But I don’t think there will be any significant effect,” Dvorkovich said.

He added that Russia is already accustomed to the fact that “the sanctions exist and such changes have little meaning.”

The US government on Thursday once again expanded the list of Russian individuals and legal entities subject to unilateral American economic sanctions, including sectoral, in connection with the conflict in Ukraine. The list has been supplemented with 17 individuals and 19 companies. The list of those subject to sectoral sanctions has in particular been expanded to include a number of Russian energy giant Gazprom subsidiaries. The sanctions were also slapped on the companies linked to the construction of the Kerch Strait Bridge.