WARSAW – On the heels of electoral defeat four years ago, Polish right-wing party leader Jaroslaw Kaczynski stood before supporters and declared that eventually victory would be theirs. “I am convinced the day is coming,” he told his followers, “when we will have Budapest in Warsaw.” 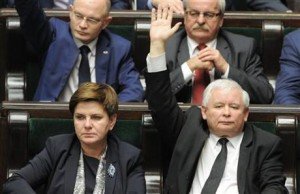 It was an expression of admiration for Hungary under Prime Minister Viktor Orban, who has consolidated power by weakening the judiciary, the media and other institutions in a manner condemned by Western powers as undemocratic.

Now, with Kaczynski’s Law and Justice party back in power since last month, critics say he is making good on that 2011 promise as the government speeds to embark on a path reminiscent of Hungary’s.

On Tuesday the parliament, dominated by Law and Justice, approved a controversial new bill that will paralyze the Constitutional Tribunal, essentially eliminating the top legislative court’s ability to act as a check on new laws. The vote was 235 to 181. One of the party’s next goals is to consolidate its hold over state media, which is expected to bring a purge of journalists who are critical of the new government. Sponsored Links

15 Cutest Pictures Of Prince George That You Will LOVE!Time To Break How to Turn $5,000 into $6.5 MillionCrowdability

The move against the court raised deep concern in the European Union, with a top member of the EU executive writing to Poland’s foreign and justice ministries on the matter Wednesday.

Commission Vice-President Frans Timmermans urged Polish authorities not to enforce the new legislation “until all questions regarding the impact of this law on the independence and functioning of the Constitutional Tribunal have been fully and properly assessed.”

“The rule of law is one of the common values upon which the (EU) is founded,” Timmermans wrote.

But the ruling party says it has a mandate for deep social change after voters gave it the strongest victory a party has ever enjoyed in post-communist Poland: a clear majority of seats in parliament and the ability to rule without a coalition partner. The party also won the presidency earlier in the year.

It says it must make changes to the tribunal because the court is filled with appointees from the previous government who will block its mandate for change.

The tribunal’s job is to examine contested legislation to ensure it does not violate the constitution. Its members are legal professionals appointed by the parliament. The court is now filled with many appointments made by the centrist Civic Platform party, which held power for eight years. The last time Law and Justice held power, from 2005 to 2007, it saw its ambitions for deep change stifled by the court.

Changes it wants include greater state spending on the economically disadvantaged and pushing for other shifts consistent with Law and Justice’s Catholic, nationalistic and anti-migrant agenda.

But civil rights observers decry what they see as a backsliding of democracy in a part of Europe that emerged from dictatorship only 26 years ago. Poland is of special concern, since with nearly 38 million people it’s the largest nation in the region and the one that has been considered a huge economic and political success.

“This government acts against Poland, against our achievements, against freedom, against democracy,” Lech Walesa, the former president and founder of the anti-communist Solidarity movement, said Wednesday on Radio Zet. “It is causing us ridicule around the world.”

The drama that played out late Tuesday in the Sejm, the lower house of parliament, was dramatic. One by one, opposition lawmakers stood to denounce the legislation as the death-knell to Poland’s constitutional and democratic order. Then a Law and Justice lawmaker, Stanislaw Piotrowicz, stood up and denounced those who claim to be fighting for democracy.

“The defense of democracy is just a smoke screen. You are defending dark interests,” he told opposition lawmakers, sparking an uproar in the chamber and chants of “Down with communism!”

“From now on, the Polish Constitution will play a similar role as it did during the communist era, namely there will be no mechanism to compel the ruling party to abide by it,” said Jacek Kucharczyk, director of the Institute of Public Affairs, a think tank in Warsaw.

Tens of thousands of Poles — among them many who belonged to Walesa’s Solidarity movement — turned out for anti-government street protests over the past two weekends, chanting “Constitution!” and voicing fears that Poland’s democracy is at risk. A large pro-government demonstration also took place in Warsaw, with Kaczynski defending the moves to change the court, saying they are necessary to fight the cronyism of the previous political elite.

All of this has raised alarms abroad as well.

A critical editorial Wednesday in the Washington Post suggested that President Barack Obama should intervene and on Monday, the foreign minister of Luxembourg — which holds the rotating EU presidency — called developments in Poland “frightening” and said the EU may have to get involved to try to alter Warsaw’s course.

Minister Jean Asselborn told Germany’s ZDF television the Polish government apparently doesn’t know “that we are a community of values, that we not only can intervene but must intervene if things are going the wrong way in terms of the rule of law.”