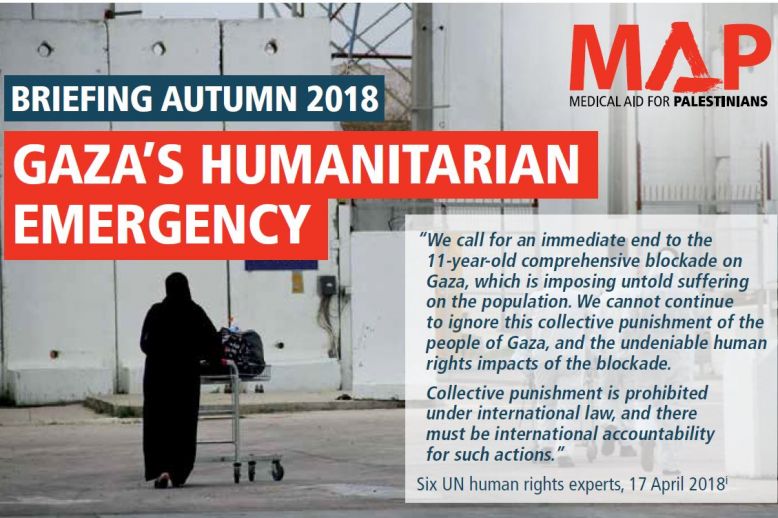 Further to the article by Medical Aid for Palestinians (MAP) New Cold War posted on June 29, 2018 MAP has released a new fact sheet, which discusses the humanitarian emergency in Gaza and recommends how the UK Government can address the unprecedented crisis.

The UK Government has announced three main aid responses to humanitarian needs in Gaza in 2018:

In addition, the UK brought forward its funding to UNRWA in the face of severe cuts by the US administration and the UN Agency’s prolonged budgetary shortfall.

Such support is vital and should expand. Development of a desalination plant is particularly welcome, and similarly future aid to Gaza’s health system should develop infrastructure and its human resources.

UK aid programmes should always be developed in meaningful consultation with the Palestinian communities they seek to serve. British Parliamentarians should be supported to enter Gaza to assess the situation for themselves and provide democratic oversight of the UK’s aid spending.

Ultimately there are no humanitarian solutions to political problems. The UK’s aid programmes are not matched by adequate political will to address the root causes of the needs they seek to address. The unlawful closure is just one symptom of a chronic, global failure to ensure adherence to international humanitarian and human rights law in Israel’s 51-year military occupation of Palestinian territory.

When an opportunity to pursue accountability was presented in May this year – in the form of a UN Human Rights Council vote to establish an independent Commission of Inquiry to investigate violations of international law in the context of the protests since 30 March – the UK abstained.

In 2012, the UN warned that Gaza would be unliveable by 2020. In July 2017, then-UN Coordinator for Humanitarian Aid and Development Activities, Robert Piper, revised the projection, stating: “[T]hat unlivability threshold has been passed quite a long time ago.”

MAP shares that view. Chronic needs and injustices must be addressed now. The people of Gaza cannot wait for a successful “Peace Process” for the closure to be lifted and international law adhered to.