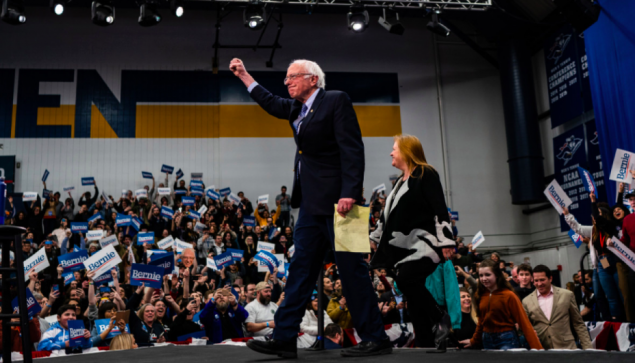 Bernie Sanders and Donald Trump are political opposites, but they’re on the same path to victory

The words “eked” and “narrowly” are getting a workout in headlines today. There is a Yeah, but… passage in nearly every major media write-up of Bernie’s win. “Sanders cements his front-runner status, but his narrow margins… show how volatile this race is,” is how The New York Times put it.

In reality, the results for Sanders cut both ways. On one hand, it’s amazing he can win any state after years of propaganda depicting him as a half-dead cross of Hitler and Stalin (MSNBC before New Hampshire outdid itself with Looney Tunes commentary about “executions in Central Park” and a “digital brownshirt brigade”).

Good. Let them. I saw this movie in 2016 and have a fair idea of how it ends. It just won’t be horrifying this time.

Four years ago, after New Hampshire, it was crystal clear that Donald Trump was not only going to win his party’s nomination, but that his path was being actively cleared by the Republican Party establishment and the national news media, whose half-baked efforts to stop him were working in reverse. I wrote this in February 2016:

The [Republicans] sent forth to take on Trump have been so incompetent, they can’t even lose properly. One GOP strategist put it this way: “Maybe 34 [percent] is Trump’s ceiling. But 34 in a five-person race wins…” The numbers simply don’t work, unless the field unexpectedly narrows before March.

Early mixed results guaranteed that Ted Cruz, John Kasich, Jeb Bush, and Marco Rubio would not drop out soon enough to give any of the others a chance. As a result, the following was obvious at this time four years ago: “Trump will probably enjoy at least a five-horse race through Super Tuesday.”

In hindsight, those Republican challengers were so villainously terrible that none would have beaten Trump in a two-person race. Still, Bush’s backers knew their man was roadkill by New Hampshire, yet didn’t pull the plug. Kasich, who in a rare moment of self-awareness was ready to bail after Iowa (“If we get smoked up there, I’m going back to Ohio,” he fumed in New Hampshire), let himself be fooled by one surprise second-place finish.

All pledged to be committed to stopping Trump but accelerated his victory by staying in too long. Popular disgust was also enhanced by delusional news-media hype surrounding a succession of would-be “real” candidates.

All of this is happening all over again, only this time it’s Democrats who are committing ritualistic self-abuse, seemingly in a conspiracy with one another and the news media to push as many votes as possible to a hated outsider. I thought this outcome might be possible for Bernie nearly a year ago:

The 30,000-foot pundit view on Sanders’ chances should be that he, of course, has a chance, one rooted in the same logic that saw Trump win. He is an unconventional candidate with an at least somewhat insoluble base of support, running in an overlarge field of mostly traditional politicians, many of whom will take votes from one another.

Still, no one could have predicted that even the idiosyncratic particulars of the 2016 and 2020 races would be so alike.

In 2016, Iowa’s Republican caucus was won by Cruz, but press wizards gushed over the “Marcomentum” of third-place Rubio, who acted like he’d won with a soaringly pompous address that somehow evoked both Obama and Henry V:

They told me that we have no chance because my hair wasn’t gray enough and my boots were too high… But tonight, tonight here in Iowa, the people of this great state have sent a very clear message.

Four days before the New Hampshire vote, Rubio stepped on a rake in a debate, repeating the “let’s dispel with the fiction that Barack Obama doesn’t know what he’s doing” schtick four times in a viral fiasco. The New York Times declared “the End of Marcomentum” roughly 10 days after it began.

This year the standout haughty victory declaration in Iowa was given by a different human haircut, Pete Buttigieg, who told Iowans “you have shocked the nation,” with zero percent of the vote in.

Unlike Rubio, Pete could argue he technically won, but otherwise, the story was the same. Press swooned – “#Pete-mentum is no joke,” declared the Daily News – only to watch as the Great Electable Hope stepped on a rake in the New Hampshire debate, with Elizabeth Warren and Amy Klobuchar both kicking him in the balls on his race record.

Like clockwork, Pete was no longer the new hotness. With about 10 percent of the results in Tuesday night, Gloria Borger on CNN opened the floodgates on the inevitable next gambit.

“Klomentum?” she asked Anderson Cooper. The latter responded, correctly, that the horrible word sounded like something he took for his sciatica.

Klomentum was instantly a thing. “[Cory] Booker and [Kamala] Harris looking at #Klomentum tonight,” tweeted Dave Weigel of The Washington Post, over a pop-art cartoon of a woman thinking, “It should have been me…” “When #Klomentum is more than a Twitter joke,” tweeted Edward Isaac-Dovere of the Atlantic.

One of the lessons of 2016 was that cheeseball clichés like “the Big Mo,” “straight talk,” and the “beer test” no longer had traction. Voter calculations were about rage and nihilism: They were done with catchphrases. Like amputees who still feel a leg is there, pundits continued speaking in this dead language, which widened the credibility gap further.

Four years later, they’re still doing it. Kasich of all people was on CNN Tuesday night talking about “the Big Mo.” Van Jones wondered about the “beer lane.” “Klomentum” is the relic being flogged this morning. The “firewall” might be next.

The hapless Joe Biden, 2020’s clear answer to 2016 establishment Hindenburg Jeb Bush, finished a disastrous fifth in New Hampshire. Joe should drop out. The world knows it. The man shouldn’t be driving, much less running for president.

Nonetheless, because Biden is perceived to have a “firewall” in the South — the “firewall” of minority voters enjoyed by this or that corporate-funded candidate is one of the more vile campaign clichés — he will certainly not drop out. His campaign, even before Tuesday, was directing reporters to ignore New Hampshire and look to Nevada, South Carolina, and Super Tuesday.

This means once again, it will likely be (at least) a five-person race through Super Tuesday, this time between Buttigieg, Klobuchar, Biden, Sanders, and Mike Bloomberg, the detestable oligarch who has not even test-driven his eleventy-gazillion election-buying dollars yet. If Elizabeth Warren stays in [checks Twitter], the pie will be split in at least six big parts.

The Democratic Party’s argument against Sanders for years has been his alleged inability to grow beyond his base. Now, things have been arranged so that he may not have to dispel these notions before Super Tuesday. This may or may not be a good thing — beating Trump is important and the Democratic nominee should have to demonstrate the widest appeal — but the brutal irony of Bernie Sanders boosted by horse-race luck and conventional-wisdom miscalculation is difficult to miss.

As with Republicans in 2016, the defining characteristic of the 2020 Democratic race has been the unwieldy size of the field. The same identity crisis lurking under the Republican clown car afflicted this year’s Democratic contest: Because neither donors nor party leaders nor pundits could figure out what they should be pretending to stand for, they couldn’t coalesce around any one candidate.

These constant mercurial shifts in “momentum” — it’s Pete! It’s Amy! Paging Mike Bloomberg! — have eroded the kingmaking power of the Democratic leadership. They are eating the party from within, and seem poised to continue doing so.

For Sanders supporters, the calculation has always been simpler: Are you bought off, or not? Just by keeping to the right side of that one principle, Sanders will hold his 20-to-30 percent and keep grinding toward victory, “narrow” wins or not. It’s a classic tortoise-and-hare story. When you know where you’re going, you tend to get there.