Oakland, CA – Today, on the heels of Ukraine’s new cabinet appointments, the Oakland Institute (OI) is releasing a new brief detailing western agribusiness investments in the country. The Corporate Takeover of Ukrainian Agriculture exposes the extent of western investment and engagement in Ukraine’s agricultural sector. It examines investments by agribusiness giants including Cargill, DuPont, Monsanto and more in all aspects of Ukraine’s agricultural supply chain since 2010.

In July 2014, Oakland Institute released a report detailing lesser-known aspects of Ukraine’s political crisis. The report, Walking on the West Side: The World Bank and the IMF in the Ukraine Conflict, detailed the austerity package offered by the IMF as a condition of the possible EU trade deal. In addition, OI reported on hidden clauses in the EU trade deal that would open Ukraine up to the cultivation of genetically modified (GM) crops. 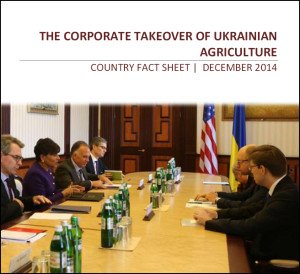 This brief comes just days after the government of Ukraine announced its new cabinet appointments. The news has spurred controversy, as three of the most important cabinet appointments were offered to foreign-born individuals who were offered Ukrainian citizenship hours before their appointments.1 The Minister of Finance portfolio was awarded to Natalie Jaresko, an American-born and educated businesswoman who has resided in Ukraine since the mid-1990s. Her roles while in Ukraine have involved overseeing the Western NIS Enterprise Fund (WNISEF), a private equity fund established by the US Congress and USAID to invest in Ukraine’s economic development. Jaresko went on to co-found and become the CEO of Horizon Capital, an umbrella investment group that administered WNISEF and two other European-American economic investment projects. News reports note that one of Jaresko’s first priorities as Minister of Finance will be to negotiate a multi-billion dollar deal with the IMF.2

“This report raises serious questions about the direction of Ukraine’s economic and agricultural future,” said Frederic Mousseau, Policy Director at the Oakland Institute. “We must ask ourselves: what impact will these investments have on the 7 million local farmers, especially with the expected lifting of the moratorium on land sales in 2016? And how will these deals affect Ukraine’s ability to control its own food supply and manage its economy in a way that will benefit the Ukrainian people?”