Only 71 shells fired in preceeding 24 hours.

Turkey-Syria-Middle East and Caucasus:
Russia in contact with Iran over preparations for Syria peace talks in Kazakhstan, Press TV, Jan 19, 2017

Why Ankara’s honeymoon with Trump may be short-lived, by Semih Idiz, Al-Monitor, Jan 19, 2017

The Council of Europe (CoE), Europe’s largest intergovernmental body advocating democracy, the rule of law and fundamental rights, is facing a historic test in confronting a daring challenge by Islamist rulers who are bent on transforming Turkey from a secular parliamentary democracy to an autocratic state rooted in xenophobic political Islam…

There are many reasons Betsy DeVos’s nomination to serve as Donald Trump’s education secretary could be justifiably quashed by the U.S. Senate. Her long public record indicates she is a religious Christian zealot who does not believe in the actual separation of church and state, wants public monies funneled into religious schools, and has contributed through family foundations to bigoted groups with a militant anti-gay agenda. During her confirmation hearing she gave disturbing answers to questions about her views of the Individuals with Disabilities Education Act, standardized tests, and school vouchers. She also suggested guns have a place in American schools, though her claim that they were necessary to defend students from grizzly bear attacks was not very compelling.

DeVos is married to Richard DeVos, the heir to the Amway Corporation fortune. She is also the sister of Blackwater founder Erik Prince, who is secretly advising the Trump team on intelligence matters, as The Intercept reported Tuesday…

The age of great expectations and the great void: History after ‘the end of history’, by Andrew J. Bacevich, TomDispatch, Jan 8, 2017

The fall of the Berlin Wall in October 1989 abruptly ended one historical era and inaugurated another. So, too, did the outcome of last year’s U.S. presidential election. What are we to make of the interval between those two watershed moments? Answering that question is essential to understanding how Donald Trump became president and where his ascendency leaves us…

Truthdig editor’s note: This column by Chris Hedges was originally published on Truthdig on Aug. 21, 2013. Read Truthdig’s coverage of President Obama’s commutation of the sentence of Chelsea Manning (formerly known as Bradley Manning).

The ugly specter of torture and lies, by Jonathan Marshall, Consortium News, Jan 18, 2017

President Obama has joked he still doesn’t know why he won the Nobel Peace Prize in 2009, but his record of waging war was no joke to thousands at the receiving end of U.S. bombs. 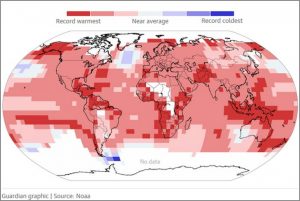 ‘It’s the fifth time in 12 years the globe has set a new annual heat record. Records have been set in 2016, 2015, 2014, 2010 and 2005. “We don’t expect record years every year, but the ongoing long-term warming trend is clear,” said Gavin Schmidt, director of NASA’s Goddard Institute for Space Studies.’

‘European, Brazilian and US scientists have delivered a new map of humanity’s mark on the world. Roads now fragment the terrestrial landscape and divide it into 600,000 patches – and only 7% of the roadless areas are larger than 100 square kilometres.’

On global warming, Trump nominees try having it both ways, by Zack Colman and Amanda Paulson, Christian Science Monitor, Jan 19, 2017