Landmine that killed OSCE obersver and injured three others on April 23 might have targeted OSCE, DAN News, April 28, 2017

[Emmanuel Macron is a career bankster and hard-liner for sanctions against Russia. He topped the polls in the first round of the French presidential election on April 23, 2017. He faces Marine Le Pen in the second-round vote on May 7.]

Life for Palestinians in apartheid Israel, by Fida Jiryis, published in London Review of Books, print edition of May 4, 2017

President Donald Trump’s plan to overhaul the nation’s tax code could provide significant tax cuts for the working-class voters who elected him, but the unknowns could end up hurting many of these core supporters of the president. A look at how Trump’s tax plan could affect families at different income levels…

Trump tax plan could be good news for many, bad for deficit, by Josh Boak and Stephen Ahlemacher, Associated Press, April 27, 2017

… The president’s proposal marks a rehash of an economic theory popularized in the 1980s. Trump officials essentially argue that benefits from the tax cuts will trickle down from higher profits for companies into stronger pay raises for workers and greater consumer spending.

‘Innocent people have been sentenced to death in Oklahoma’, commission concludes, by Liliana Segura and Jordan Smith, The Intercept, April 26, 2017

The Oklahoma Death Penalty Review Commission after more than a year of work has recommended that a moratorium on carrying out capital punishment in the state be continued indefinitely. “It is undeniable that innocent people have been sentenced to death in Oklahoma,” the report concludes.

Award-winning journalist Barrett Brown was re-arrested and taken into custody Thursday, the day before he was scheduled to be interviewed for a PBS documentary.

Brown quickly became a symbol of the attack on press freedom after he was arrested in 2012 for the reporting he did on the hacked emails of intelligence-contracting firms. Brown wrote about hacked emails that showed the firm Stratfor spying on activists on behalf of corporations. Brown also helped uncover a proposal by intelligence contractors to hack and smear WikiLeaks defenders and progressive activists.

Faced with the possibility of 100 years in prison, Brown pleaded guilty in 2014 to two charges related to obstruction of justice and threatening an FBI agent, and was sentenced to five years and 3 months. In 2016, Brown won a National Magazine Award for his scathing and often hilarious columns in The Intercept, which focused on his life in prison. He was released in November 2016…

SEOUL – President Trump’s comment that he wants South Korea to pay for a missile defense system being set up in the country jolted its presidential race on Friday and surprised the government, leaving it scrambling to figure out the intentions of a close ally… 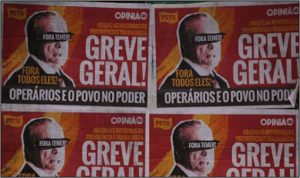 Posters calling for general strike in Brazil on April 28, 2017

As daylight broke in Brazil on Friday, scores of labor unions and grassroots organizations began what is expected to be one of the biggest general strikes in the country’s history against President Michel Temer’s neoliberal reforms, bringing the country to a standstill…

‘This fight is ours’: Venezuela women march against imperialism, Telesur, April 27, 2017

In detail: The deaths so far from right-wing protests in Venezuela, published by Venezuela Analysis, April 27, 2017

Canada’s defense minister ‘regrets’ that he falsely claimed to the the architect of a 2006 battle in Afghanistan, CBC News, April 28, 2017


[Canada’s housing bubble has seen double-digit house price increases for years in Vancouver and Toronto. The bubble is trembling at the news of Home Capital’s troubles. The average price of a detached house in Vancouver is $1.7 million as speculators continue to pour money into the market; in Toronto, prices are up a whopping 33 per cent for the year ending March 2017.]

Trump stumbled on healthcare and immigration, but on the environment he’s been ‘a wrecking ball’, by Elvin Halper, LA Times, April 27, 2017