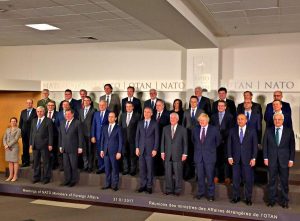 Meeting of NATO foreign ministers in Brussels on March 31, 2017

First NATO visit for US secretary of state

U.S. Secretary of State Rex Tillerson used his first visit to NATO HQ in Brussels to denounce Russia’s aggression in Ukraine. “We want, obviously, to have a discussion around NATO’s posture here in Europe, most particularly in Eastern Europe in response to Russia’s aggression in Ukraine and elsewhere,” Tillerson told reporters Friday morning before a foreign ministers’ meeting.

He also told NATO allies to meet their spending commitments…

U.S. Secretary of State Rex Tillerson reassured his nervous European counterparts over Washington’s commitment to NATO on Friday and pressed them again to spend more on defense, triggering a rebuke from Germany. Foreign Minister Sigmar Gabriel said it was neither “reachable nor desirable” for Germany to spend the agreed NATO target of two percent of member states’ economic output on defense. NATO allies have until 2024 to do that.

“Two per cent would mean military expenses of some 70 billion euros. I don’t know any German politician who would claim that is reachable nor desirable,” Gabriel told the first meeting of NATO foreign ministers attended by Tillerson.

“The United States will realize it is better to talk about better spending instead of more spending,” he said, noting that humanitarian, development and economic aid [sic] to stabilize countries and regions should also count…

EU says no to free-trade talks with Britain until ‘progress’ on final terms of Brexit, by Jennifer Rankin and Daniel Boffey in Brussels, and Jon Henley and Rowena Mason, The Guardian, March 31, 2017

Turkey-Syria-Middle East and Caucasus:
Kurdish politicians including HDP co-chair to go on hunger strike in protest of prison conditions, by Turkish Minute, March 30, 2017  And reporting in Rudaw, here.

Canadian troops operating in east Mosul as mission extended to June, by The Canadian Press, March 31, 2017

Canadian special forces have taken a more active role in the battle for Mosul, where weeks of bloody fighting have failed to dislodge the Islamic State of Iraq and the Levant. National Defence revealed the shift on Friday as the Liberal government announced it was extending the current mission in Iraq until the end of June.

PYONGYANG – The Democratic People’s Republic of Korea (DPRK) has reaffirmed its strategy to develop a nuclear strike capability to foil the U.S. ambition to annex it and “reduce all Koreans to modern-day slaves,” the Korean Central News Agency (KCNA) reported Friday…

Clive Hamilton’s book Defiant Earth – The Fate of Humans in the Anthropocene is not for the faint-hearted. Basically, its thesis is that the Earth – and us along with it – is going down the tubes. Our rampant, irrational use of the planet and its resources, including our exploitation of climate-changing fossil fuels, means we are interfering and upsetting the functioning of the Earth system that sustains us…

New Cold War.org Information Bulletin is posted daily (or every several days) to the New Cold War.org website as a complement to the feature articles published or re-produced in full. Text in [square brackets] is that of New Cold War.org editors. The bulletin is included in the daily, Monday-Friday newsletter emailed to website subscribers. Subscribe at website home page. Comments and suggestions welcome, email to [email protected].