Court Judgment to expedite case clears way for Ukraine to be declared in default, legally requiring IMF funding of Ukraine to cease. [Ukraine says it will appeal the decision.]

International Day of Solidarity with the People of Odessa, on April 10, 2017, appeal published on Popular Resistance.org (U.S.)

Moscow’s efforts are aimed at preventing a new round of violence in southeastern Ukraine, Russian Foreign Minister Sergey Lavrov said in an interview with Russia’s Argumenty i Fakty weekly…

“The main thing envisaged by the Minsk agreements is direct dialogue between Kiev, Donetsk and Lugansk,” Russia’s top diplomat said. “Neither Russia, nor the new U.S. president nor anyone else can do anything for the warring sides other than what the settlement really depends on – reaching an agreement with each other directly on mutual security guarantees and the principles of building a joint future.”

Theresa May gives no cut-off date for freedom of UK-EU movement, by Rowena Mason and Jessica Elgot. The Guardian, March 29, 2017

In her letter to Donald Tusk, Theresa May did not name a specific date on which EU citizens will lose the automatic right to move to the UK, suggesting that the “cut-off” will end up being the day of Brexit itself… 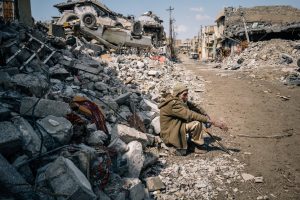 Al-Jadida neighbourhood of Mosul, Iraq on March 24, 2017. Hundreds have been killed there by U.S. airstrikes (Alice Martins, Washington Post)

MOSUL, Iraq — A sharp rise in the number of civilians reported killed in U.S.-led airstrikes in Iraq and Syria is spreading panic, deepening mistrust and triggering accusations that the United States and its partners may be acting without sufficient regard for lives of noncombatants.

Civilians in western Mosul are being shot at by ISIS and Iraqi forces alike, by Patrick Cockburn, The Independent, March 28, 2017

Endgames: inside Iraq In the first of a series of dispatches, Patrick Cockburn enters war-torn Mosul and gets a rare insight into what life is like in the Isis-held western part of the city

MOSUL – Civilians trying to flee the besieged Isis-held enclave in west Mosul are being shot dead by Isis and Iraqi army snipers as they try to cross the Tigris River, says an eyewitness trapped inside the city with his family…

Iraqi government ‘made a mistake’ by attacking Mosul before capturing Isis sanctuaries, says governor of Kirkuk, by Patrick Cockburn, The Independent, March 29, 2017

KIRKUK – The Iraqi government made a mistake that will allow Isis to survive by seeking to capture Mosul before eliminating other Isis safe havens in northern and western Iraq to which its fighters can retreat, according to a senior Iraqi leader…

Mazlumder, Turkey’s main pro-Islamic human rights organization, has witnessed an internal revolution as those who criticized the government too much were kicked out.

Turkish Foreign Minister Mevlut Cavusoglu has criticized a decision in the northern Iraqi city of Kirkuk to hoist the Kurdish flag over government buildings and public places. The remarks came a day after the Kirkuk Provincial Council voted in favor of a motion to fly the regional flag on public buildings in the province. Most Arab and Turkmen boycotted the vote…

United States:
Is Obamacare ‘exploding’? Nope, but there are some rough spots, by Zachary Tracer, Bloomberg News, March 28, 2017

… But immigration and civil liberties advocates in Canada caution the numbers [fewer refusals of entry into the U.S.] don’t tell the whole story. Immigration lawyer Lorne Waldman in Toronto said he is fielding more calls than ever from people planning a trip to the U.S. He says the decreased rate of refusal could be just that people are now better prepared than they used to be, and so fewer are being turned away as a result.

Keynes, civilisation and the long run, by Michael Roberts, March 25, 2017

Keynesian economics dominates on the left in the labour movement.  Keynes is the economic hero of those wanting to change the world; to end poverty, inequality and continual losses of incomes and jobs in recurrent crises.  And yet anybody who has read the posts on my blog knows that Keynesian economic analysis is faulty, empirically doubtful and its policy prescriptions to right the wrongs of capitalism have proved to be failures…

… Trump’s order initiates a review of the Clean Power Plan, which restricts greenhouse gas emissions at coal-fired power plants. The regulation — Obama’s signature effort to curb carbon emissions — has been the subject of long-running legal challenges by Republican-led states and those who profit from burning oil, coal and gas.

The order also lifts a 14-month-old moratorium on new coal leases on federal lands. The Obama administration had imposed a three-year moratorium on new federal coal leases in January 2016, arguing that the $1 billion-a-year program must be modernized to ensure a fair financial return to taxpayers and address climate change.

Trump has launched a blitzkrieg in the wars on science and Earth’s climate, by Dana Nuccitelli, The Guardian, March 28, 2017

New Cold War.org Information Bulletin is posted daily (or every several days) to the New Cold War.org website as a complement to the feature articles published or re-produced in full. Text in [square brackets] is that of New Cold War.org editors. The bulletin is included in the daily, Monday-Friday newsletter emailed to website subscribers. Subscribe at website home page. Comments and suggestions welcome, email to [email protected].