As of Nov 22, 2016, the ‘search’ function on the website will be needed by readers to find items by published title or author. Articles that are published exclusively on New Cold War.org will continue to be published in their entirety and tagged in the relevant subject category. As well, articles from other publications will occasionally be re-posted here in their entirety, tagged by category and as ‘editor pick’. As always, the weblink to the original source will be provided. Comments in square brackets [ ] are those of New Cold War.org editors. 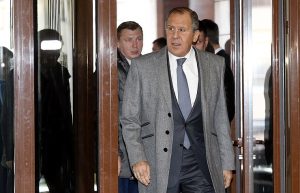 MINSK, November 29. /TASS/. The Normandy Four ministerial meeting has yielded no breakthrough solutions, Russian Foreign Minister Sergey Lavrov said on Tuesday after talks with his counterparts from Germany, France and Ukraine in Minsk…

Turkey’s authoritarian shift may be institutionalized in a matter of months, as few obstacles remain before a referendum on a presidential system.

The residents of Raqqa and Deir ez-Zor in Syria are fleeing the fighting and are heading to al-Hawl camp in Hasakah, Syria, near the Turkish border, where conditions are harsh for the thousands of displaced

… Under President Obama, security officials have followed a familiar script once they have taken someone into custody. They ask an allied country to conduct the interrogation, or instead question the suspect aboard an American warship using military interrogation techniques, then turn him over to the Justice Department for prosecution in a civilian court inside the United States.

Mr. Trump campaigned on a promise to bring back waterboarding, a banned method previously used by CIA interrogators, and allow unspecified practices he called “a hell of a lot worse.” The president-elect said in an interview last week that he had heard compelling arguments that torture was not effective, though it is not clear whether he intends to retreat from his position.

If he moves ahead to fulfill his campaign pledge, it will not be easy…

President-elect Donald J. Trump warned on Monday that the push to build ties with Cuba after decades of animosity could quickly be wiped away. “If Cuba is unwilling to make a better deal for the Cuban people, the Cuban/American people and the U.S. as a whole, I will terminate deal,” he said on Twitter.

Cuba archive on New Cold War.org. There is an ever-growing archive of articles on New Cold War.org analyzing Cuba’s past, present and future. The archive includes extensive coverage of the passing of Fidel Castro on November 25, 2016. Go to the ‘Cuba’ category page on the main website page.