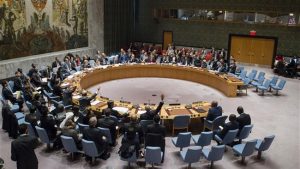 The United Nations Security Council on Saturday unanimously adopted a resolution welcoming a ceasefire in the Syrian civil war brokered by Russia and Turkey.

Despite Turkey’s high-profile collaboration with Russia and Iran aimed at ending the Syrian crisis, Turkey’s position in Syria remains confusing.

The Kurdish People’s Protection Units (YPG) reported on Friday that their positions were being attacked by Turkey’s military and Islamist rebels. The anti-YPG offensive targeted military installations across northern Aleppo Governorate. “The Turkish Army and allied jihadist groups launched a renewed offensive in the Kurdish areas of Rojava, targeting YPG headquarters with heavy weapons and airstrikes,” the Protection Unit’s leadership said in a statement.

Diana Buttu and Gideon Levy on Israeli settlements, John Kerry, military and the end of a two-state solution, broadcast on Democracy Now!, Dec 30, 2016 (with transcript)

Peter Ford, former UK ambassador to Syria, says ‘ Britain ‘got Syria wrong every step of the way’, story on BBC, Dec 23, 2016. [The full, six-minute audio of the interview with Peter Ford is posted here on You Tube. His words are strongly challenged by the BBC program host.]

“It was eminently foreseeable to anyone who was not intoxicated with wishful thinking. The British Foreign Office, to which I used to belong, I’m sorry to say has got Syria wrong every step of the way.”

From the archive: Now the truth emerges: how the U.S. fueled the rise of Isis in Syria and Iraq, commentary by Seumas Milne, The Guardian, June 3, 2015

The experiences of a Haitian-American unionist in Trump’s America, by Marie-Paule Florestal, published in Haiti Liberté (print weekly), Nov 23, 2016

… In the 40th Precinct, at the southern tip of the Bronx, as in other poor, minority neighborhoods across the country, people long hounded for small-time infractions are crying out for more protection against grievous injury or death. By September, four of every five shootings in the precinct this year were unsolved.

Out of the city’s 77 precincts, the 40th has the highest murder rate but the fewest detectives per violent crime, reflecting disparities in staffing that hit hardest in some neighborhoods outside Manhattan, according to a New York Times analysis of Police Department data.

Africa has seen the most dramatic growth in the deployment of America’s elite troops of any region of the globe over the past decade, according to newly released numbers. In 2006, just 1% of commandos sent overseas were deployed in the U.S. Africa Command area of operations. In 2016, 17.26% of all U.S. Special Operations forces — Navy SEALs and Green Berets among them — deployed abroad were sent to Africa..

Using data provided by Special Operations Command and open source information, The Intercept found that U.S. special operators were actually deployed in at least 33 African nations, more than 60% of the 54 countries on the continent, in 2016…

How a little-known patent sparked Canada’s opioid crisis, by Grant Robertson and Karen Howlett, The Globe and Mail, Dec. 30, 2016

The untold story of how a single pill sparked Canada’s opioid crisis, and ignited one of the biggest pharmaceutical battles in Canadian history

[Canada’s decades-long ‘war against drugs’, mirroring its failed counterpart in the United States, has cost the lives of thousands of people, seen tens of thousands jailed or otherwise crippled with criminal records. Now it is  upending the country’s medical services industry as the industry responds daily to hundreds of drug overdose emergencies and an average of two and a half people dying. The inventors of oxycontin and other opioid derivatives, on the other hand, have made billions of dollars in profits.]

The prevalence of fentanyl and carfentanil means drug users in the Downtown Eastside are always at risk, but never more so than when social assistance cheques arrive every month. The Globe spent roughly 24 hours in the troubled neighbourhood for a first-hand look at the overdose crisis

Canada does not have a national database tracking deaths from opioid overdoses. In a bid to fill that gap, The Globe contacted coroners and medical examiners in every province and territory…

‘The men and boys of West Africa to leave home because the rains have become so fickle, the days measurably hotter, the droughts more frequent and more fierce, making it impossible to grow enough food on their land. Some go to the cities first, only to find jobs are scarce…’

‘Scholars of migration count people like Mr. Bokoum among the millions who could be displaced around the world in coming decades as rising seas, widening deserts and erratic weather threaten traditional livelihoods. For the men who pour through Agadez, these hardships are tangled up with intense economic, political and demographic pressures…

For China, climate change is no hoax – It’s a business and political opportunity, by Matthew Kahn (University of Southern California), DeSmog Blog, Dec 31, 2016