Up to one thousand Nazi Waffen-SS veterans and their supporters have marched through Latvia’s capital, Riga, in their annual commemorating procession. In response, Latvian anti-fascists came out to “clean up” the route. 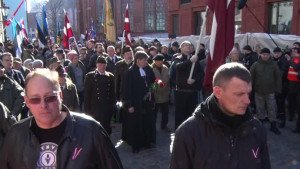 The march of the SS veterans started in Vecriga, in Riga’s old town, at 11:00 local time Monday after a religious service. The participants, holding the national flags of Latvia, Lithuania and Estonia, walked through the city to the Monument of Freedom, where they lay flowers. Many veterans wore uniforms of the legion and pre-war uniforms.

The use of Nazi and Soviet symbols was forbidden in the parade and the participants were not allowed to veil faces.

“These people fought for the victory of the Third Reich, the most genocidal regime in human history,” Efraim Zuroff, director of the Simon Wiesenthal Center office in Jerusalem, told RT in Riga. “Among the people who served in Latvian SS Legion there were those who previously served in area commando, Latvian security police, actively involved in mass murder of Latvian Jews and Jews brought to Latvia to be murdered.”

Zuroff says the participants of the march are often associated with the fight for Latvia’s independence. “Here they try to create the impression that these people helped bring about independent Latvia,” he said. “There is a direct line from fighting the military service to independent Latvia today. But nothing can be farther from the truth because Nazi Germany had absolutely no intention to give Latvia independence. That is only because the Nazi Germany lost the war that today there is independent democratic Latvia.”

Numerous policemen were present at the march and also a private security agency’s employees as the authorities expected confrontations with local anti-fascist organizations. Latvian Interior Minister Rihard Kozlovskis had earlier called on the residents to stay away from the city center unless absolutely necessary. The US Embassy in Latvia also recommended its citizens to pay more attention to security.

Anti-fascist activists staged a protest, wearing white overalls and pretending to “disinfect” the area from the “Nazi disease,” cleaning and washing the pavement near the Freedom Monument. Other participants displayed photos from concentration camps in Latvia. [See video report of the anti-fascist disinfection action at the RT.com weblink above.]

Russia has condemned the holding of the Nazi veterans’ march as a violation of international law. “This is a direct contradiction against the ruling of the Nuremberg Trials,” Konstantin Dolgov, the Russian Foreign Ministry’s human rights ombudsman, told the lower house of parliament, the State Duma, in Moscow.

The Latvian legion of the Waffen-SS consisted of almost 150,000 Latvians and was split into two divisions. The legion was created in 1943 on the orders of Adolf Hitler. In March of the same year, the legion was already battling the Soviet Red Army near the town of Pskov. It was among the last of the Nazi forces to surrender in 1945.

The Waffen-SS march has been held annually on March 16 since 1998, although it is not an official holiday. Latvia’s national day of remembrance for war heroes is on November 11.