News reports, as well as related reports further below, New Cold War.org, May 28, 2017 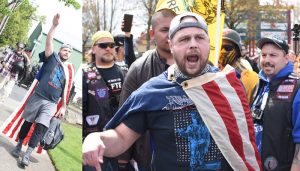 Jeremy Christian is charged with murdering two people in Portland, OR on May 26, 2017 (Doug Brown, Oregon Mercury)

As commuters in Portland, Oregon headed home in Friday afternoon’s sweltering heat on a public transit MAX train, a man screamed violent hate speech directed at a number of groups and religions. When a few good samaritans attempted to calm the man’s rage, which he directed in particular at two nearby women wearing hijabs, he stabbed two of them to death and hospitalized a third, according to witness reports.

Authorities have since reported the man is 35-year-old Jeremy Christian, a known white supremacist.

Authorities have since reported the man is 35-year-old Jeremy Christian, a known white supremacist. According to Portland Mercury’s report about the incident [‘Suspect in Portland hate crime murders is a known white supremacist, May 27, 2017], Christian showed up to the right-wing ‘March for Free Speech’ in Portland on April 29 carrying a baseball bat “in an attempt to assault left-wing protesters. The bat was quickly confiscated by Portland police officers. He ranted how he was a nihilist. He’d soon yelled racial slurs (“fuck all you n*****s”) and gave the Nazi salute throughout the day. He yelled ‘Hail Vinland‘ throughout the day.”

Portland Mercury also reports that at the April 29 event, police officers appeared familiar with Christian “but not threatened by him. They claimed he had a head injury and was mentally ill.”

One of Christian’s stabbing victims died on the train, the second died in the hospital and the third is expected to survive but remained hospitalized through Saturday morning.

According to witness and police reports, the incident hinged on Christian’s angry slurs directed at two women who appeared Muslim. Approximately  50,000 Muslims live in Portland, and Friday marked the start of the month-long Muslim fast Ramadan. Most of the world’s 1.6 billion Muslims observe the holiday.

Author and frequent CNN and Fox News commentator Harris Zafar has  lived in Portland for 31 years and spoke with The Oregonian/OregonLive Friday night about the “tragic and concerning” incident saying he was of course sad but also inspired by the men who “had nothing to gain by putting themselves in harm’s way,” to help the women.

“As a Muslim, it’s unnerving to know — being a father, being a husband, being a son — that this could have been one of the many women in our mosque and the greater Portland area,” he said to The Oregonian.

Christian attempted to flee the scene when the train stopped, but police caught him and he was booked on two aggravated murder charges, two intimidation (hate crime) charges, and a felon in possession of a restricted weapon charge.

The FBI said in a statement about the incident on Friday evening  that it is  “offering any resource that may assist Portland Police in their investigation” and will “determine whether there is any potential federal violation.

“At the core of the FBI’s mission is the belief that every person has the right to live, work and worship in this country without fear,” the FBI said in its statement. “Hate and bigotry have no place in our community, and we will not allow violence in the name of hate to go unanswered.”

According to the Portland Mercury, Christian has several felonies on his record, including first-degree robbery and second-degree kidnapping, as well as a “conviction for carrying/using a dangerous weapon from 2002.”

Christian’s Facebook page is littered with anti-Semitic statements and other violent, hateful speech— as well as his enthusiastic support for Donald Trump. Here are a few examples pulled from his page: [see original article at weblink above].

Portland Mayor Ted Wheeler, was flying from London to Portland when the crime occurred, so Portland’s City Commissioner Chloe Eudaly, standing in for the mayor, released a statement on behalf of the City Council Friday night. She praised the people who bravely stood up to hate speech, and those who helped police locate Christian. “These are troubling times across our city, our country and the world,” she said. “We cannot let this divide us. We need to unite against all forms of violence and hate. Our differences should be a cause for celebration, not something that foments hate.”

There is too much hatred in our world right now, and far too much violence. Too much of it has arrived here in Portland,” Wheeler said in a press release. “My heart goes out to the families of those who lost their lives, and to those who witnessed what happened. Thank you to our first responders, who provided aid, and police who captured the suspected killer. Now is the time, we must come together as a community and love one another. We must reject hatred and violence. We must seek justice.

Update: On Saturday afternoon, police identified the two men who died as 53-year-old Ricky John Best of Happy Valley which borders Portland, and 23-year-old Taliesin Myrddin Namkai-Meche of Southeast Portland. The third stabbing victim, who is not believed to have life-threatening injuries, is 21-year-old Micah David-Cole Fletcher of Southeast Portland.

Two killed in stabbing on MAX train in northeast Portland as man directs slurs at Muslim women, police say, The Oregonian, May 27, 2017

The president of the United States sets a tone, an example, a style. With Donald Trump, that tone conveys a suffused rage and a violent intolerance that equates questions with insults and disagreement with disloyalty. It is a style that openly sanctions assault on those who dare to dissent.

The seeds were planted at Trump campaign rallies where, according to Politico, the candidate’s security detail attracted repeated complaints for use of excessive force and aggression, racial profiling and trampling free speech. The results have now blossomed.

When Greg Gianforte, the Republican candidate for a hotly contested congressional seat in Montana, was charged with “body-slamming” British reporter Ben Jacobs, he was defended by right-wing media organizations. Gianforte gleefully reported he raised $100,000 in donations after being charged, and his supporters condoned the assault…

A gang of bigots and yahoos descended on Lindsay Thurber Comprehensive High School in Red Deer, Alberta on May 23, mongering hate and nonsense.

Ostensibly, this was supposed to be a group of concerned parents worried about a violent incident at the school, supposedly carried out by a gang of Syrian refugees. The protesters claimed the Syrian boys had not been disciplined for their actions because of political correctness and cultural relativism. It was a lie, from start to finish.

According to Red Deer RCMP, the actual incident began with a misunderstanding between two Grade 9 boys at a Red Deer skateboard park. A literal misunderstanding because one of the boys, a recent Syrian refugee with limited English, mistakenly believed the other boy had said something offensive.

The incident set off a series of frictions which culminated in a lunchtime brawl involving eight boys, including four Syrian refugees. A ninth non-Syrian kid — a former Thurber student who had been banned from the school property — also jumped into the fray. No one was injured. Police weren’t notified until the next day.

All eight Thurber students were suspended for five days, the maximum penalty under the School Act. Each will have to go through a readmission hearing before being allowed to return. No one, says the school district, received special treatment because of religion or ethnicity. It was a garden variety schoolyard brawl, one Bruce Buruma, head of community relations for Red Deer Public Schools, described as a “dust-up.”

Buruma says there are just 14 Syrian students at Thurber, which has an enrolment of 1,500. Some are still struggling with English. Although they’re high-school aged, some have never attended school before now. It’s a big adjustment but, on balance, Buruma says integration has been going well.

Here’s the other lie. Those 40 or 50 “protesters”? According to Buruma, only two or three of them had children at Lindsay Thurber. Few were from Red Deer at all. “Over 80 per cent of them were people from outside the community,” Buruma says. “The people who showed up have an issue with the Islamic faith. And they were happy to go with the misinformation they’d been given.

“Our kids felt unsafe all day, and that was because of these protesters.”

Who were these come-from-away bullies, who travelled to Red Deer to harass schoolchildren? They included members of the Worldwide Coalition Against Islam, Canada. Their Facebook page features a banner showing an armoured, sword-wielding avenging Aryan angel standing on guard for Canada and a caricature showing a Muslim man with a long black beard, demonic pointed ears and the nose of a pig being kicked in the rear with the caption, “Get Out Of Our Country.” The message is not subtle.

Also on hand was the leader of a Calgary-based federal fringe party, the National Advancement Party, which, among other things, wants to ban the production of halal and kosher meat in Canada.

RCMP say there were also at least five uniformed members of the Soldiers of Odin, a Canadian offshoot of a Finnish neo-Nazi vigilante group.

This was, in fact, a travelling hate circus inspired by fake news and viral lies. And when the cameras stopped rolling, the hate clowns jumped in their cars and left town. This week Red Deer. Next week, wherever malice and political opportunism take them.

“The majority of these protesters were not Red Deerians,” says Red Deer Mayor Tara Veer. “I’m hard-pressed to see how this reflects our city when they’re not from here. This does not represent the Red Deer we know.”

Perhaps we should focus, instead, on the heroes and heroines of the day. The Red Deer RCMP, who tracked the social media commentary all weekend and prudently dispatched 30 officers to police the rally. The principal of Lindsay Thurber, Dan Lower, who calmly faced down the haters. And the brave students who stood up for their school and their principles despite the jeering of the adult bullies, who exercised their “free speech” by screaming insults at kids.

When it was all over, a group of Syrian students and a group of other Thurber students simply started playing soccer together, while two RCMP officers joined in. And Wednesday morning, when Const. Derek Turner went back to check in on things, the soccer game was back on.

Maybe, says Buruma, this week’s events will be a wake-up call and a teachable moment for staff and students — about the reality of fake news, the dangers of a social media hoax and the need for the school community to overcome differences and stand together.