Nazi whitewash gathers momentum as memory of the Holocaust fades 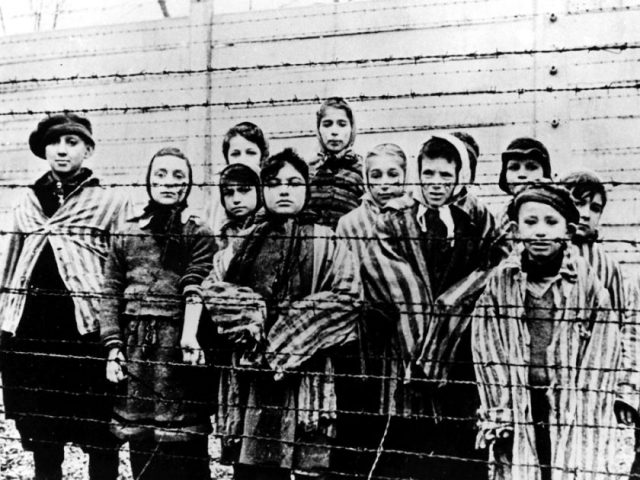 “…many Canadians no longer aware of the crimes that took place in the name of the Third Reich, [and] an opening has emerged for those who want to rewrite the history of Adolf Hitler’s regime and those who served it…”

With the horrors of the Holocaust a distant memory, and many Canadians no longer aware of the crimes that took place in the name of the Third Reich, an opening has emerged for those who want to rewrite the history of Adolf Hitler’s regime and those who served it.

A movement is afoot to claim that the Nazi collaborators and the SS units made up of Ukrainians, Latvians and other eastern Europeans, were actually nationalistic heroes and in no way associated with the Nazis. I have written a number of articles exposing the role of these collaborators in the Holocaust and their complicity in murdering tens of thousands of Jewish men, women and children.

I have received emails from Ukrainians and Latvians who claim the Holocaust never took place. Others write that while Jews were indeed killed, they deserved the death and destruction the Nazis brought down on their communities.

And then there are others who claim that journalists who write articles about the Ukrainian and Latvian SS units – and the parades that are held in those nations to this day honouring these Nazi collaborators – are “pro-Russian” or somehow spouting Kremlin propaganda.

I’ve had the distinction of being singled out as such in a recent report on Russian disinformation by the Macdonald-Laurier Institute of Ottawa, a right-wing think-tank.

The report’s author, Marcus Kolga, claims my articles about the role of Ukrainians and Latvians in the Holocaust and their service in SS units has parroted the Kremlin’s narrative and has “been critical of Canada’s support for states targeted by Kremlin aggression.”

For starters, the articles I have written about Ukrainian and Latvian Nazis who butchered Jews don’t even mention Canada’s support for those two countries, let criticize that support.

My articles are about those who would deny that Ukrainians, Latvians, and others from eastern Europe eagerly participated in the Holocaust and supported Adolf Hitler. The articles also expose those who would declare these Nazi collaborators as some kind of heroes.

To be sure, the Ukrainian and Latvian governments were not happy about my articles, considering they exposed their nations’ dark past in supporting the wholesale slaughter of Jews.

And the Macdonald-Laurier Institute has received funding from the Latvian Ministry of Defence. In addition, the Embassy of Latvia in Canada has also provided sponsorship for the institute.

What is going on in Latvia and the Ukrainian and other east European nations is a Nazi whitewash designed to rehabilitate those from these countries who took part in some of the most heinous crimes in history.

Here’s how it works.

Ukrainian and Latvian militia and police units were among the most brutal in helping the Nazis hunt down and murder Jewish men, women and children.

They were good at killing defenceless people. So good, that the Holocaust Chronicle, published in 2003 and written by 7 top scholars in the field of Holocaust studies, noted that Ukrainians were also sent to help kill Jews during the Warsaw Ghetto uprising in April 1943. The Chronicle published a photo of two of Ukrainian SS members standing over the bodies of Jews murdered during that uprising. See the photo below: 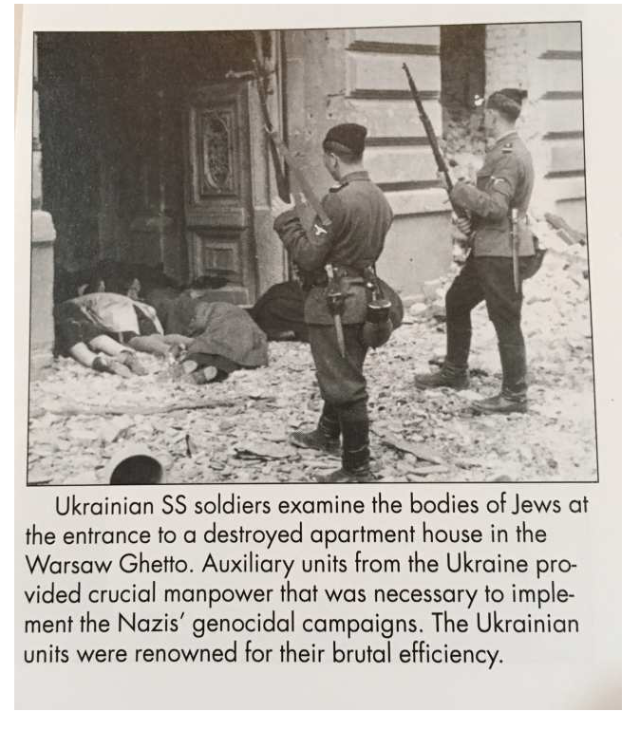 SS General Jurgen Stroop, later executed as a war criminal, was very pleased with the Ukrainian, Latvian and Lithuanian volunteers who helped him and his men murder and hunt down 56,000 Jews. In his diary Stroop wrote that these killers were not only “nationalists and anti-Semites” but among his best troops. They were “wild at heart and with a tendency towards base things. But nevertheless obedient,” Stroop gushed about his Ukrainian, Latvian and Lithuanian killers.

The Ukrainian militias who murdered Jews in the ghetto and elsewhere went on to serve in a new SS unit created by the Nazis, the 14th SS Galizien Division. Stroop was brought on as an advisor to the newly created division.

A similar development happened in Latvia. The members of Latvia’s Arajs Kommando, who had killed an estimated 26,000 Jews for the Nazis, went on to serve in the Latvian SS legion.

These SS units were sent to fight the Russians as they closed in on the Third Reich.

Decades later the whitewash began. The Ukrainians and Latvians who fought for the SS – as the whitewash explains – weren’t really Nazis. They instead were nationalists fighting for their own country against the Russians. And of course none of them committed any type of crime, or so the whitewash explains, carefully ignoring the previous role of the individual members in these SS units in the mass murder of tens of thousands of Jews.

Last year, Karlis Eihenbaums, Latvia’s Ambassador to Canada, launched an attack on Canadian journalist Scott Taylor who wrote about the Latvian Legion (15th Waffen Grenadier Division of the SS (1st Latvian) et al) and Latvian killers like war criminal Herberts Cukurs as well as the members of the Arajs Kommando. Like the Macdonald-Laurier Institute, Eihenbaums suggested such articles were “fake news” and “disinformation.” And like the Macdonald-Laurier Institute, Eihenbaums tried to smear the journalist by suggesting he was under the “influence” of the Russian government. Eihenbaums also targeted my articles.

As I have written before, the eager participation of some Latvians in the Holocaust is not “fake news.” It is a well-documented historical fact that many of the killers from the Arajs Kommando went to the Latvian Legion. These Latvians, Ukrainians, Estonians and others from eastern Europe nations served Hitler and his war aims. No number of claims of “fake news” can change that fact.

These days there are parades in Latvia and Ukraine to honour these SS units who fought under the Swastika. These parades and memorials, which have attracted the support of Neo-Nazis and other fascist groups, have long been controversial and questioned by many throughout Europe. See the photo below and note the white pride shirt on the young Ukrainian with the Ukrainian SS veteran. 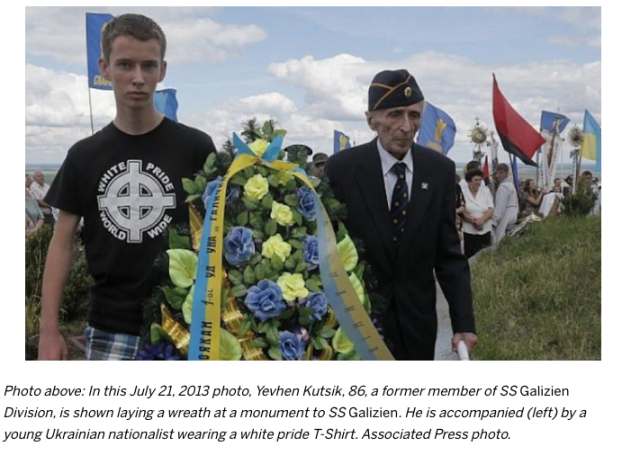 For instance, the controversy over the Latvian Legion and the annual parade held in Riga (each March) to celebrate these Nazi collaborators is well known and has been going on for two decades, long before the term “fake news” was even coined. In 1998 the parade caused a storm of protests around the world, particularly in Israel, where Holocaust survivors couldn’t understand Latvia’s desire to celebrate such ruthless killers. German Chancellor Helmut Kohl and French President Jacques Chirac were among those that year to protest the Latvian parade. The Times of Israel reported on last year’s Latvian SS parade in Riga, which took place mid-March.

So much for “fake news.” Did Helmut Kohl and Jacques Chirac spread Russian “disinformation” when they denounced the SS parade in Latvia? Of course not.

This whole issue isn’t about “fake news” or Russian “disinformation.” It is about individuals and nations trying to whitewash their Nazi collaboration and rewrite history, while attacking journalists and other organizations who don’t want to let that happen.

While the Macdonald-Laurier report carefully ignores the crimes of Ukrainians and Latvians who supported Hitler’s Third Reich and butchered Jewish men, women and children by the thousands, there are those in the U.S. Congress and Jewish community speaking out against the Nazi whitewash.

In late April 2018 more than 50 members of the U.S. Congress condemned the government of Ukraine’s ongoing efforts to glorify “Nazi collaborators.”

The letter, signed by both Republicans and Democrats, outlined concerns about ongoing ceremonies to glorify leaders of the Ukrainian Insurgent Army as well as 14th SS Galizien Division (aka 1stGalician/Galizien or the 1st Ukrainian Division). “It’s particularly troubling that much of the Nazi glorification in Ukraine is government-supported,” noted the letter to U.S. Deputy Secretary of State John Sullivan. The letter was initiated by Democratic Reps. Ro Khanna of California and David Cicilline of Rhode Island.

In the summer of 2018 B’nai Brith Canada’s chief executive officer Michael Mostyn called on Prime Minister Justin Trudeau to use his trip to Latvia that year to push back against that country’s glorification of Nazi collaborators as well as attempts to deny the nation’s role in the Holocaust.

Mostyn called on the Canadian government to speak out more forcefully to denounce parades in Latvia and other eastern European nations that honour units who fought with the Nazis during the Second World War.

“We must challenge all those who distort the historical record on governments, military units or organizations that fought with, supported or sympathized with the Nazis during World War II,” Mostyn wrote to Trudeau. “This includes government leaders who acquiesce in, or fail to condemn, a process of Nazi glorification that amounts to Holocaust distortion.” 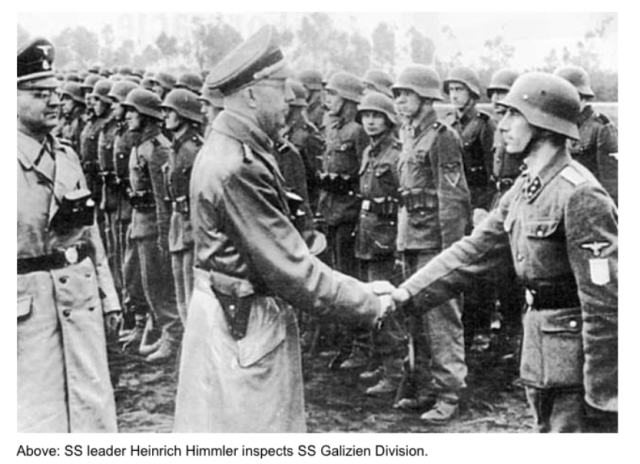 “Those who glorify the record of such organizations or units cannot dismiss criticism as ‘fake news’ “,added Mostyn. “The fact is that some organizations and their leaders, now glorified for their fight against the Soviet army, were also involved in atrocities against Jewish civilians or embraced ideologies that were deeply anti-Semitic and perpetuated social hostility towards their Jewish populations. This is why B’nai Brith rejects any efforts to constrain historians and the media from researching what happened and publicly explaining it in an objective manner.”

These are words that those at the Macdonald-Laurier Institute should pay attention to.