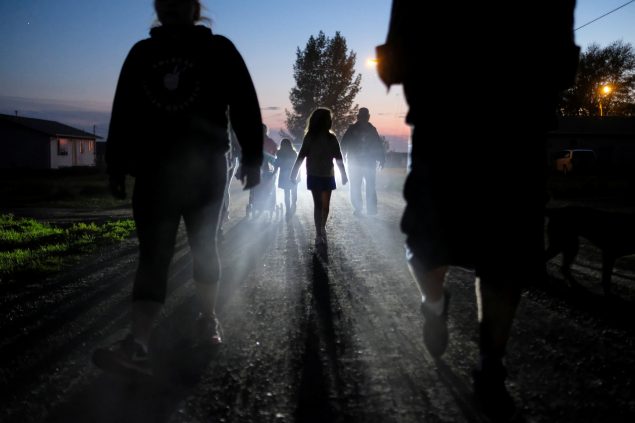 People take part in a smudging ceremony organised by the First Nations Indigenous Warriors and the American Indian Movement on the Cote First Nation, near the town of Kamsack, Saskatchewan, Canada, August 6, 2017. Smudging is a common practice among some indigenous peoples in North America and is believed to cleanse a person or place of negative energy. REUTERS/Zachary Prong

More than 30% of inmates in Canadian prisons are Indigenous – even though aboriginal people make up just 5% of the country’s population, according to new figures released by a federal watchdog.

In a scathing report published on Tuesday, the correctional investigator of Canada, Dr Ivan Zinger, described Indigenous overrepresentation in the country’s jails and prisons as “nothing short of a national travesty”.

The figure is highest in the prairie provinces of Manitoba, Saskatchewan and Alberta, where Indigenous people make up 54% of the prison population. Quebec had the lowest proportion of aboriginal prisoners, but at 15% the group was still dramatically overrepresented.

Numerous factors – including poverty rates and racism in policing – contribute to the imbalance in convictions.

And once in detention, Indigenous people face another set of systemic inequities: Indigenous offenders are more likely to be sent of maximum-security facilities and are disproportionately the recipients of harm, both self-induced and in incidents involving “use of force”. They are also much more likely to be placed in solitary confinement.

What makes the findings even more troubling, said Zinger, is that the proportion of Indigenous prisoners has steadily increased. Since April 2010, the Indigenous population in prisons has grown by nearly 44%, whereas the non-Indigenous incarcerated population has declined over the same period by 13.7%.

And although there are far few female prisoners, the statistics for Indigenous women are even bleaker: they currently represent 42% of the female prison population.

“In failing to close the outcomes gap between Indigenous and non-Indigenous offenders, the federal correctional system makes its own unique and measurable contribution to the problem of overrepresentation,” he said. “[The system] needs to accept its share of responsibility, recognizing that tweaks around the edges of the system simply won’t cut it.”

Despite running on a pledge to curb the numerous injustices Indigenous peoples face in 2015, the number of inmates has steadily ticked upwards under Justin Trudeau.

But no government in recent decades has been able to remedy the problem, said Zinger, despite royal commissions, government inquiries all calling for substantial overhaul of the status quo.

“Bold and urgent action is required to address one of Canada’s most persistent and pressing human rights issues,” he said.

At the same time, Indigenous people are more likely to be the victims of violent crime in Canada: in 2018, they made up 22% of all homicide victims.

The coerced sterilization of Indigenous women